Paper title: Warm Saturns: On the Nature of Rings Around Extrasolar Planets that Reside Inside the Ice Line 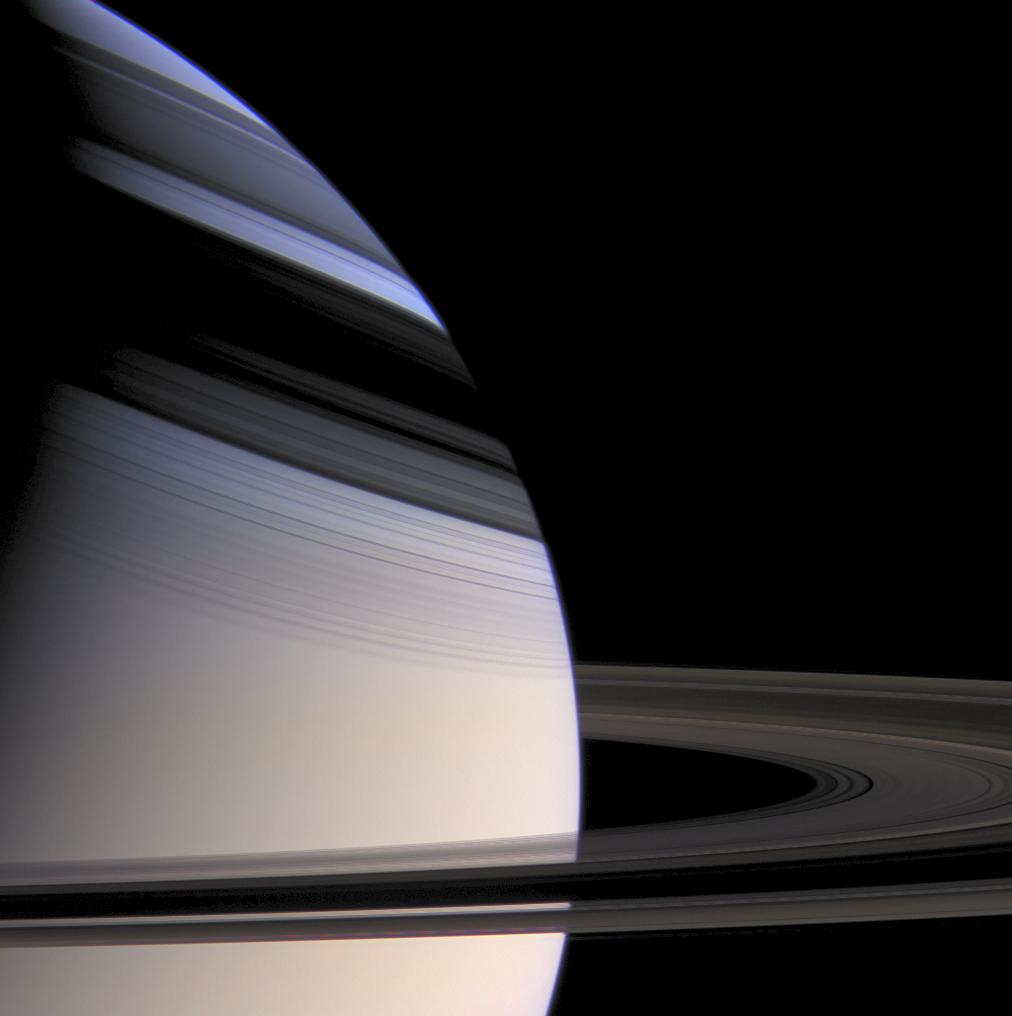 Saturn, taken from the Cassini probe

In this paper, Schlichting and Chang take the detectability constraints outlined by Barnes and Fortney in 2004 (when less than 10 transiting planets had been discovered!) which suggested that Saturn-like rings could be detected around transiting planets if you had a photometric precision of about 10-4 and a data point every 15 minutes. This precision and cadence is within the Kepler Space Telescope’s photometric capabilities, suggesting that these types of rings, if they exist in these systems, should be observable.

Given the possibility that rings could be discovered in the Kepler data, this paper investigates what types of ring systems could physically exist around planets with semi-major axes of 1 AU or less. This population of planets is dubbed “Warm Saturns” (in reference to the “Hot Jupiters” which are larger and closer to their host stars).

Could rings exist so close to the host star? How might these ring systems look like ones in our own solar system? How would the rings be different? What could a ring detection tell us about the exoplanet?

Having determined that rings could potentially exist around most of these planets, the lifetime of a ring is estimated. Poynting-Robertson drag causes the particles that make up rings to decay in their orbits, destroying the ring. This can be explained by conservation of angular momentum; as the dust particle absorbs photons it gains mass, because of mass-energy equivalence. In order to conserve angular momentum, it must drop into a lower orbit. Poynting-Robertson drag is a function of stellar radiation, so this effect will matter much more for exoplanets within 1 AU than it does for the solar system gas giants. The authors use this effect to estimate ring lifetimes and suggest that large sized particles (~1+ meter diameter) or optically thick rings would be necessary to have long-lived rings that we could observe.

A ring must fall both within the planet’s Roche Lobe, as discussed above, and within its Hill Sphere. The Hill Sphere is basically the region within which the planet’s gravity is more important than the star’s. Outside of this radius, neither rings nor moons can stably orbit the planet. A handful of the known transiting planets would not be able to have stable rings based on this criterion.

While planetary rings around Jupiter, Saturn, Uranus, and Neptune are all made mostly of 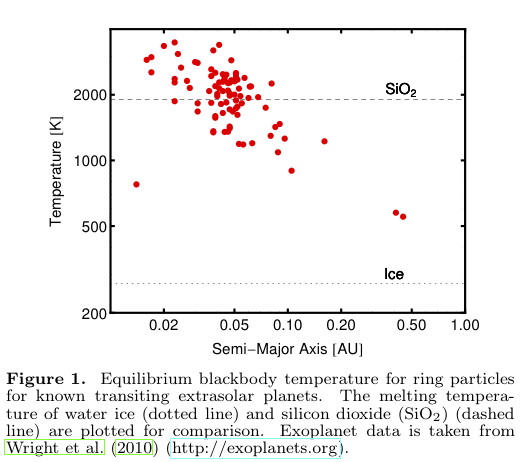 various ices, rings around these Warm Saturns would instead be made of rock. This different composition is because the planets are so much closer to their stars; the temperatures in those regions are well above the melting point of water. In fact, about two thirds of the known transiting planets are also above the melting point of rock!  Up to 35 exoplanets have temperatures below this point, cool enough to have rings of rocky material; this is shown in Figure 1.

The authors suggest that the orientation of the ring would be determined by the planet’s oblateness and the stellar tide. By measuring the orientation of a ring distorted by both these forces, we could estimate the extra “quadrupole” terms in the gravitational potential of the planet. This would ultimately give us significantly more information about the internal structure of the planet.

The authors conclude that while most of the known transiting exoplanets are too hot and close to their stars to have rings of rocky material, many of the “Warm Saturns” will be cooler, further from their stars, and more likely to have rings. The Kepler telescope is well poised to detect any such rings if they exist. Learning about extrasolar ring systems would teach us a lot about ring formation and could give us insight into planetary structure.