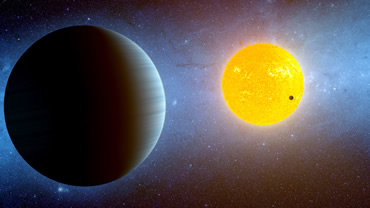 One of the highlights of the 218th AAS meeting was the announcement on Monday of the discovery of Kepler-10c, a transiting planet with a radius of only 2.2 Earth radii. Even more excitingly, this planet is in the same system as Kepler-10b, the first definitively rocky exoplanet and the smallest planet discovered so far with a radius of only 1.4 Earth radii. Kepler-10b was announced earlier this year by Batalha et al. and you might remember reading that they had detected two sets of periodic dimming events. The first set of events had a period of 0.84 days and the second set had a longer period of 45.3 days. Even though the longer period set of events corresponded to a deeper dip in flux (376 ppm versus 152 ppm), spectroscopic observations of the target star revealed only radial velocity reflex motion at the shorter period of 0.84 days. Radial velocity confirmation of the shorter period candidate allowed Batalha et al. to confirm Kepler-10b as a 4.6 Earth mass planet, but they were not able to detect the presence of the longer period candidate in the radial velocity follow-up observations.

In this paper, Fressin et al. validate the discovery of the longer period candidate by considering all of the alternative explanations for the periodic dimming events that do not involve a transiting exoplanet in a 45.3 day orbit around Kepler-10 and then ruling out those explanations that do not fit the data. By combining information from the shape of the original Kepler light curve, near-infrared follow-up observations with the Spitzer Space Telescope, high-resolution speckle and adaptive optics observations, and spectroscopy, Fressin et al. determine that the likelihood that Kepler-10c is not an exoplanet is 1.6×10-5. This probability is low enough to allow them to validate Kepler-10c as a bona fide exoplanet. Note that Kepler-10c is a validated planet and not a confirmed planet. The Kepler team reserves the use of the term “confirmed” for planets with measured masses from radial velocity follow-up observations or transit timing variations. Planets without determined masses but with very small false alarm rates are referred to as “validated” planets. Other validated Kepler planets are Kepler-9d and Kepler-11g, the outermost planet in the now-famous 6-planet system announced by Lissauer et al.

The depth, duration, and shape of the light curves of transiting planets all contain clues about the transiting planet. Changing the planet radius, orbital period, eccentricity, or impact parameter (the distance between the planet’s path and the center of the star) will alter the shape of the light curve in a predictable manner. Accordingly, astronomers can produce models of the light curves that would result from various configurations of transiting planets and eclipsing stars. For the Kepler mission, the most relevant astrophysical false positives that could mimic the signature of a planetary transit are background (or foreground) eclipsing binary stars, hierarchical triples in which the target star is part of a 3-star system containing eclipsing stars, and systems with another planet eclipsing either the binary companion of the target star or an unassociated star in the field. In the last case, there is a planet involved, but the planet does not have the same radius as the apparent candidate. 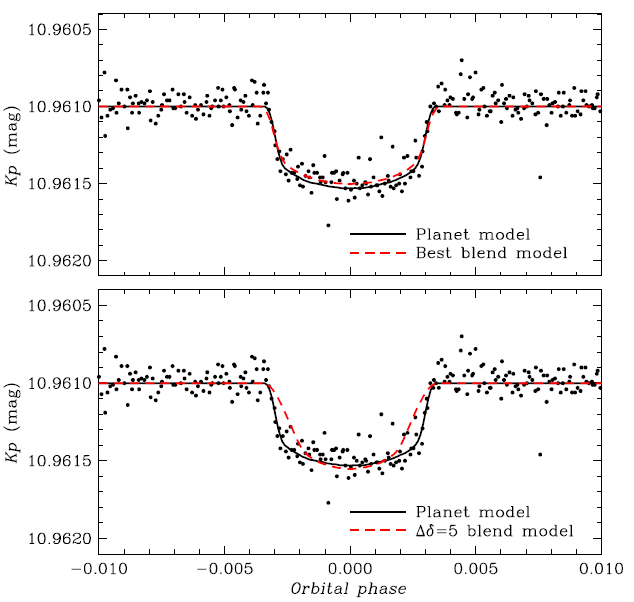 Fortunately, there are ways to disentangle the source of the periodic signature in the light curve. The Kepler team uses the BLENDER technique developed by Torres et al. (2004, 2011) to determine the light curves and colors for a wide range of possible false positives. They then compare the resulting light curves and colors to the actual Kepler data to determine which configurations are consistent with the observations. Although the basic idea that different systems would produce different light curves is relatively simple, BLENDER is a sophisticated program that requires a significant amount of computer time to explore the parameter space. For the validation of Kepler-10c, Fressin et al. ran a suite of models using a range of secondary star masses, planet radii (for the case of another planet), impact parameters, transit durations relative to the duration expected for a circular orbit (this accounts for variations in eccentricity), and distances between the binary system and the target star. For the models in which the binary system was physically associated with the target star (i.e., hierarchical triples), all three stars were required to have the same age (11.9 Gyr) and metallicity ([Fe/H]=-0.15). In the case of background or foreground eclipsing binaries, the age of the binary system was set to 3 Gyr and the stars were assigned solar metallicity.

In addition to the shape of the light curve, the photometric color of the system both during and outside of transit is an important constraint. For a transiting planet around a single star, the color of the system will remain constant because the decrease in flux is due to the planet blocking some of the light from the star. Since the blocked light has the same spectrum as the rest of the star, the transit is achromatic. However, in the case of binary star systems, both stars contribute to the flux received from the system. Unless the stars have nearly identical spectral types, the color of the light will change during eclipses. Accordingly, astronomers can differentiate between transiting planets and eclipsing binaries by determining whether a transit has the same depth in multiple wavelength bands. For Kepler-10c, Fressin et al. obtained observations of two transits at 4.5 microns using IRAC (InfraRed Array Camera) on the Spitzer Space Telescope. They observed a depth of 344 +/- 85 ppm, which agrees with their expectations from the visible Kepler passband transit depth and indicates that Kepler-10c cannot be explained by an eclipsing binary unless the two stars have similar colors. 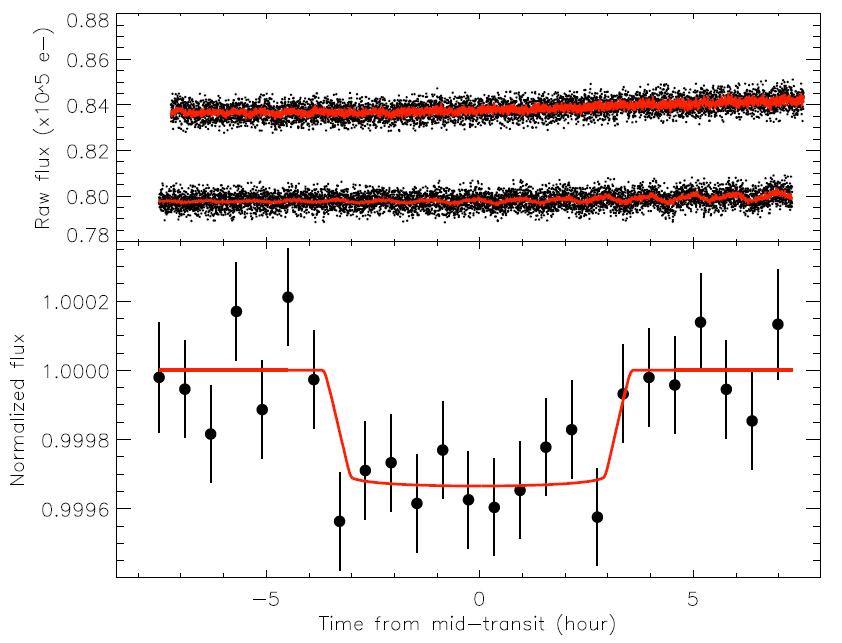 Spitzer observations of the transit of Kepler-10c. The top panel shows the raw data in black and the binned version of the raw data in red. The bottom panel displays the reduced data in 36 minute bins. The red line indicates the best-fit model. The transit depth agrees with the transit depth observed by Kepler, so the transit is achromatic. This means that Kepler-10c cannot be explained by two eclipsing binary stars with different colors. Figure 1 from Fressin et al. 2011.

During the confirmation of Kepler-10b, Batalha et al. conducted high resolution observations of Kepler-10 using the 3.5m WIYN telescope on Kitt Peak in Arizona and the 5m Palomar telescope. They did not find any companions between 0.”05 and 12.”5 of Kepler-10, which restricts the magnitudes and positions of any possible background stars that could be mimicking the presence of a planet.

Batalha et al. also conducted spectroscopic observations of Kepler-10 using HIRES (HIgh Resolution Echelle Spectrometer) on the 10m Keck telescope. They would have been sensitive to unassociated stars roughly two magnitudes fainter than Kepler-10, but they did not detect any stars in the slit.

By tracking the motion of the image centroid (the center of light), Fressin et al. exclude the possibility of background stars at distances greater than 2” from Kepler-10. If the dip in the light curve were due to an eclipsing foreground/background star, then the distribution of light on the detector would shift during and out of transit. Since the centroid does not move, the source of the dip must lie within 2” of Kepler-10.

Combining the results from BLENDER, the original Kepler data, and the subsequent follow-up observations, Fressin et al. find that only a small number of blends could possibly explain the 45-day signal. Given the low false alarm rate (1.6×10^{-5}), they feel confident about validating Kepler-10c as a 2.2 Earth radius transiting planet in a 45-day orbit. The only downside of this remarkable work is that the mass of Kepler-10c is still unknown. The radial velocity measurements from Batalha et al. yield an upper limit of 20 Earth masses, but we will have to wait for improved radial velocity techniques or evidence from transit timing variations in order to learn the mass (and density) of Kepler-10c.