Big things grow in a bottom-up way from little things.  This is the basic story of structure formation in the canonical

model; massive structures are built up via hierarchical clustering and mergers of smaller structures.  A natural question is: what are the smallest building blocks of this bottom-up process?

In order to answer this question, we must first make some assumptions about what dark matter actually is.  One popular candidate particle is the neutralino.  For the neutralino, dark matter decoupling from baryons occurs at a natural mass cutoff scale

is the decoupling temperature (see Loeb and Zaldarriaga 2005 for a detailed derivation).  Hence the smallest important dark matter structures we expect to find are on the order of

, which is just tens of Earth masses!  Furthermore, these “micro-haloes” would have a size scale of about

, making them very dense (roughly 10 particles per cubic centimeter, as compared to roughly

particles per cubic centimeter from the galactic dark matter halo).

As micro-haloes orbit the Galactic Center, they are affected by two main tidal effects: gravitational interactions with single stars, and interaction with the gravitational potential of the galaxy itself.  The authors explore both of these effects separately using N-body simulations (which can be run using a code such as GADGET which Nathan talked about in a previous astrobite). 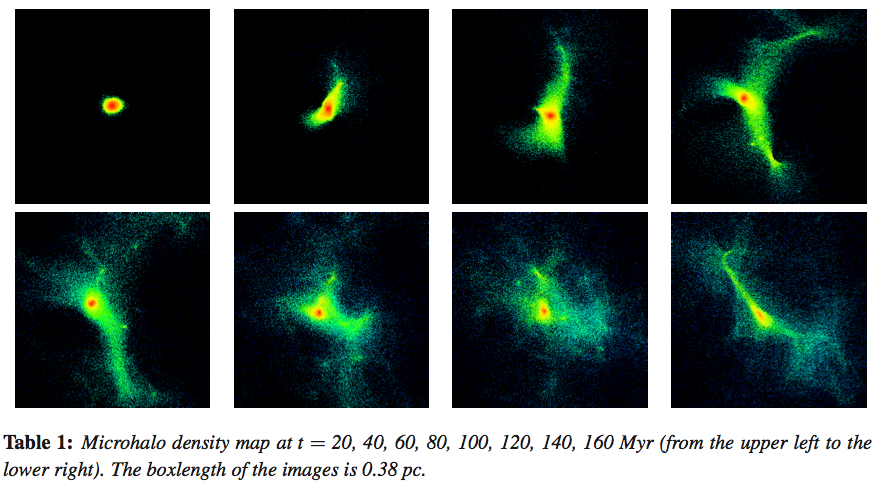 The effect of successive single-star interactions with a mini-halo

Single star interactions: When an individual star has a close encounter with a micro-halo, the gravitational interaction “heats up” the halo by increasing its velocity dispersion, and hence causing the halo to expand (and become less tightly bound).  The authors let their simulated micro-halo traverse a periodic box of “stars” moving with typical Milky Way speeds and dispersion.  See figure 1 (taken from the paper), which illustrates the effect of stellar disruptions.  They find that in 80 Myr (40 perpendicular passages through the disk), about half of the micro-halo mass has become unbound.  After about 160 Myr (80 disk passages), 90% of the micro-halo is unbound and the central core begins to loosen.  Finally, after 200 Myr (100 disk passages), no bound structure remains.

Tidal Disruption by Galactic potential: Depending on the shape of the potential of the host galaxy, as well as the shape of the micro-halo’s orbit, the edges of the halo can be pulled into long tidal streams.  However, this mechanism of mass loss becomes less efficient as the halo gets smaller and smaller, such that a dense core always remains.

The authors first check these effects separately, then take a stellar-interaction “pre-heated” micro-halo and let it orbit in a galactic potential to get a sense of how the two effects combine (see fig 2). 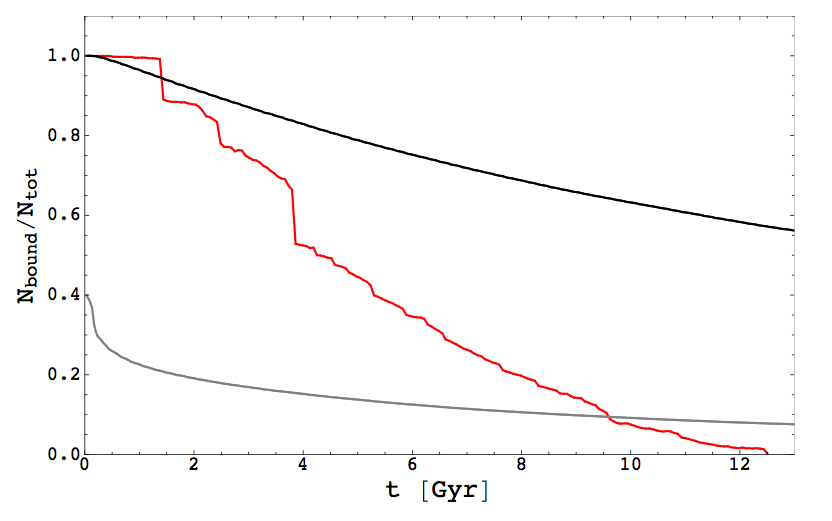 The authors note that if the following two criteria were met by micro-haloes in our galaxy, then they could significantly affect our efforts to detect dark matter, simply by us being in or near a micro-halo or its tidal tail:

The simulations discussed above suggest that disruptions (especially stellar interactions) destroy these halos so efficiently that neither of these criteria are met by mini-haloes in the Milky Way.  In fact, by the current time, only a fraction of the cores of the mini-halos will be bound, and even these will only have a few percent of their original mass left.  The only way, then, for our dark matter detection experiments to be strongly affected by a mini-halo is if such a halo were very close to Earth, but the authors place the probability of such a scenario at about 0.0001% (see the longer version of their paper for more details).