As Nathan mentioned a couple weeks ago in this astrobite, the recent discovery of a z ~ 7 quasar has added some serious new constraints to theories about the growth of supermassive black holes in the early universe. A quasar that bright at that redshift implies that theorists need to figure out how to grow billion solar mass black holes in a relatively short span of time – just 750 million years after the big bang. Not surprisingly, cosmological simulations of the early universe are one of the largest areas of theoretical research in astronomy at present, and the authors of today’s paper claim that they have built a simulation which can easily reproduce these hulking black holes in just a few hundred million years.

The simulation, called MassiveBlack, covers a giant region of space at very high resolution, with 65 billion particles in a cube that is 0.75 Gpc on each side. This allows the authors to investigate a cosmological region containing many dark matter halos large enough to contain supermassive black holes, while at the same time probing the much smaller scale galactic physics within each halo, such as star formation, black hole accretion, and quasar feedback processes. The simulation is run from a time shortly after the big bang to redshift 5, probing the cosmological timescale over which supermassive black holes need to form to be consistent with observations. A two-dimentional “unwrapped” view of the simulation volume at z = 5 is shown in the figure below. As expected, the region looks fairly homogenous over large scales, but as one zooms in, individual halos containing massive black holes can be seen.

This figure shows the entire 3D volume of the simulation, "unwrapped" into 2D. Insets show successively smaller regions, centered on one of the largest black holes in the simulation.

The results of the simulation center on an important fact – in order for the seed black holes to grow to several billion solar masses by z ~ 6, they need to be fed by filaments of cold, dense gas streaming into each halo. The idea that galaxies and black holes are fed by these filaments of cold gas is called “cold flow accretion”, and though some astronomers claim to have seen observational evidence for it at low redshift (see this astrobite), it remains primarily a theoretical claim. Using MassiveBlack, the authors zoom in on several of the growing supermassive black holes in a series of redshift snapshots, and they analyze not only the mass of the black holes, but also the gas density and temperature around them (see the figure below). Sure enough, each quasar is fed by two or three streams of cold, dense gas. Importantly, feedback from the quasar does not begin to heat the surrounding gas enough to disrupt the streams until after a redshift of about 7, by which time the black holes are already large enough to satisfy observational constraints. Once the feedback does kick in, the black hole growth stops being exponential, and begins to self-regulate. 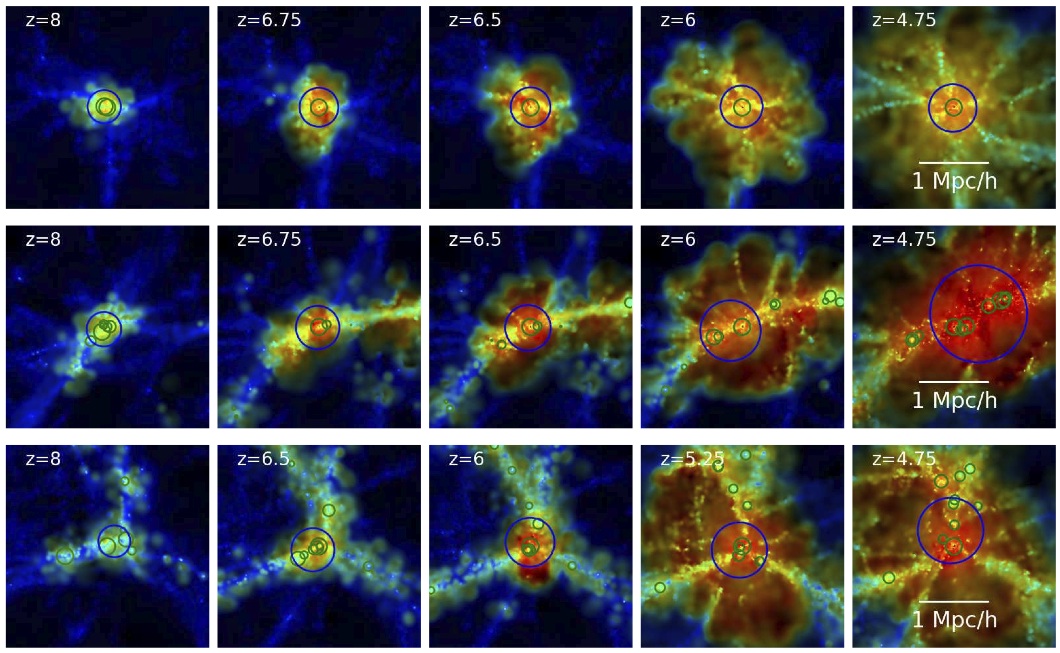 Shown here are three examples of the supermassive black holes typical in the simulation, with redshift evolution from left to right. Green circles indicate black holes, while blue circles highlight the virial radius of each halo. The gas temperature is indicated by the color scale, with the coldest gas in blue, and the hottest in red.

The authors make another important point in their analysis. Mergers, a competing theory for early supermassive black hole growth, play a relatively small role in the early redshifts probed by this simulation. They become more important later, for galaxy growth, but the black holes are growing so quickly that they do not have time to undergo very many significant merging events. This leads the authors to a testable hypothesis. The black holes attain their giant, several billion solar mass sizes within a few hundred million years, while the growth of their host galaxies is expected to proceed much more slowly, on scales of a few billion years. This means that these early quasars should represent significant deviations from the MBH-σ relation (discussed in this astrobite), since the black hole growth is far outstripping the host galaxy growth.