The Optimum Way to Board a Plane

Today’s astrobite doesn’t have much to do with astronomy. In fact, at yesterday’s morning coffee discussion here at UCSC, there was a bit of surprise that this particular paper was cross-listed to the astrophysics section of arxiv.org at all. I guess the authors know that astronomers tend to spend an unusually large fraction of their lives in airplane cabins, so it would be worthwhile to notify us of the latest developments in the science of air travel.

The question this paper would like to answer is a deceptively simple one: what is the optimal way to board an airplane? As the answer to this particular question can save airlines money, a significant amount of effort has already been expended on computational models of airplane boarding. In 2008, the lead author of this study published a candidate for the holy grail of the field: the optimum boarding strategy. Here, the authors experimentally verify whether the boarding procedure worked out by Steffen in 2008 is truly the optimum boarding strategy.

Using a mock 757 cabin, complete with standard airline seats and overheard bins, the authors asked a group of volunteers to board the cabin according to several different boarding algorithms. The group of passengers included children and seniors, but mostly consisted of employment-age adults. Most passengers had a piece or two of luggage, enough so that the overhead bins were completely full when the plane finished boarding. 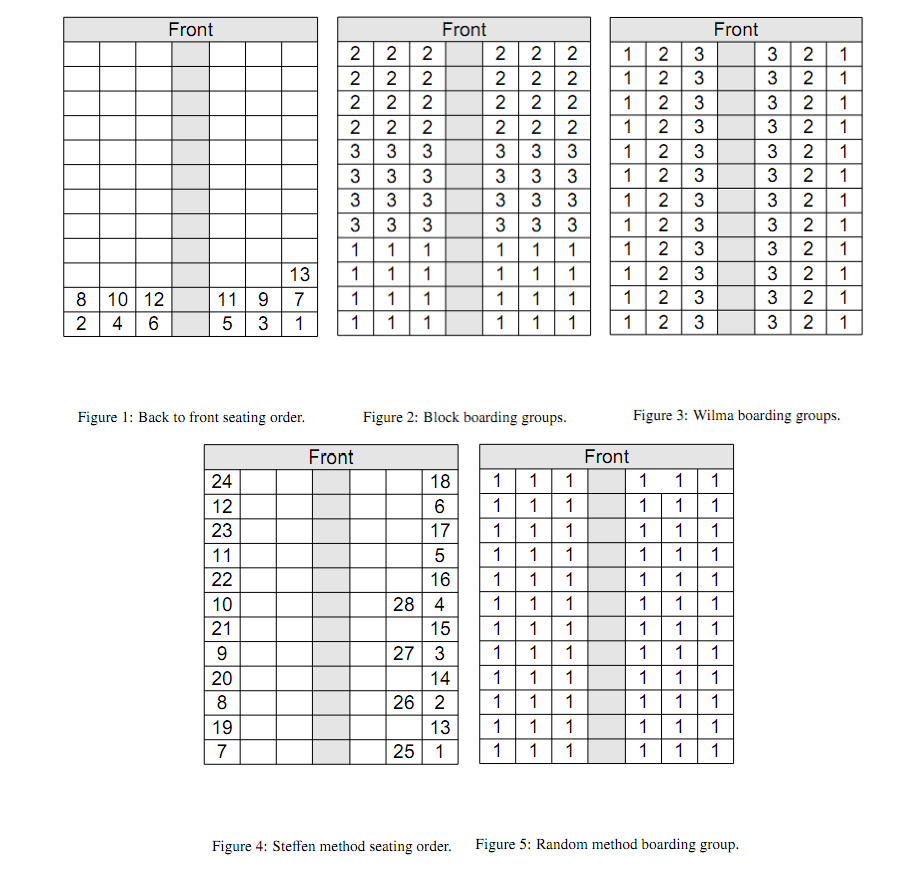 A graphical illustration of the boarding methods tested by the authors.

The authors test five different boarding methods. The first method had the passengers line up by seat assignment, from the back to the front. This maximizes the number of aisle interferences. The second method, employed by the majority of airlines today, was block boarding, where passengers board in groups based on the position of their seat in the plane. The third method, the so-called Wilma boarding method, had all of the passengers in window seats board first, then passengers in center seats, then aisle seats. This method eliminates seat interferences by construction. Next, the Steffen method, like the Wilma method, has passengers in window seats board first, followed by center seats, then aisle seats. However, it does so in a staggered fashion in an effort to avoid aisle interferences. The last method had the passengers line up in a completely random order, board, and find assigned seats. This is distinct from the free-for-all method employed by Southwest Airlines, since passengers must find their assigned seats rather than picking a seat while boarding.

In the end, the authors find that the most efficient boarding method is indeed the Steffen method, allowing the passengers to board in about three and a half minutes. The Wilma method comes in as a close second, allowing boarding in about 4 minutes and 15 seconds. Random boarding does just a little bit worse than Wilma, allowing boarding to finish in 4 minutes, 45 seconds. Block boarding and back-to-front do the worst by far, both finish boarding after more than 6 minutes has elapsed.

While the most efficient boarding schemes do reduce boarding time significantly, they probably can’t work in practice due to sociological factors. A Steffen boarding scheme entails breaking up families during the boarding process – a prospect parents with young children would surely object to. The fact that random boarding does so much better than block boarding suggests that there might be a way to easily increase the efficiency of airplane boarding – simply go with random boarding instead of block boarding!