Distant objects race away from us at ever-faster speeds, a cosmological expansion of space itself driven by dark energy (DE). The speed of this expansion depends on w, the ratio of pressure to energy density in the DE: the more negative it is, the faster the expansion. Measuring how far away distant objects were and are tells us the expansion rate — and that constrains w, which is, so far, the best grasp we have on DE’s elusive essence. 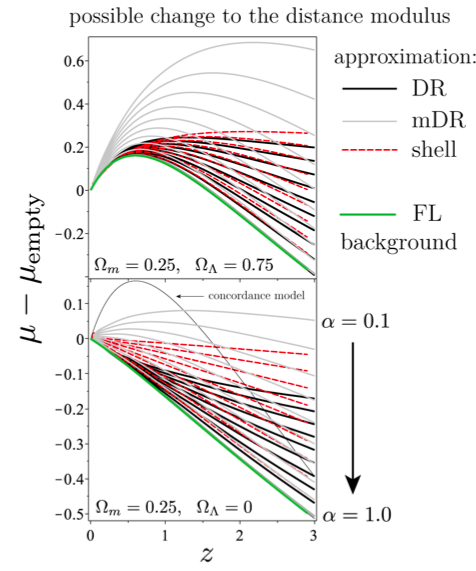 Change to the distance modulus 4 different approximations for dealing with inhomogeneities along bundle path would yield. DR is Dyer-Roeder, mDR modified Dyer-Roeder. Significance: 1) effects are big. 2) they are different for each approximation. All are discussed in text. Fig. 1 in the paper.

So if you care about dark energy, structure formation (which DE strongly affects), or the future of the Universe (flat, de Sitter vacuum or violent death in a “big rip”?), you must care deeply about precision measurements of large-scale distances. Although “precision cosmological distance measurements” may not sound like the most exciting thing in astrophysics, for those who enjoy the more violently explosive side of our discipline, not to fear — observing supernovae is a primary technique to measure cosmological distance, since they are roughly “standard candles.” We know how bright they ought to be at a given distance (luminosity), so how bright they are here (flux) tells us their distance.

That is where today’s paper, Clarkson et al.’s “Interpreting supernovae observations in a lumpy universe,” begins. Clarkson et al. point out that the bundle of light beams from SNe (specifically, SNIa’s) captured by a telescope is extremely narrow — less than 1 AU for a source at z ~ 1. On the other hand, the cosmological simulations and perturbation theory we use to model and correct these measurements are coarse — smoothed far above scales ~ 1 pc. In particular, since 1 AU is less than the mean distance between massive objects (stars, small DM halos, galaxies), bundles with width on the corresponding angular scale almost never encounter an object. Interestingly for history buffs, the basics of this problem were first pointed out by Zel’dovich (of later fame for the SZ effect) and independently by Feynman (“Surely You’re Joking?”).

So are models of the effects of inhomogeneities on beam-bundles from SNIa adequate? Clarkson et al. seek to answer this question.  They compare four approaches using a numerical simulation of looking through a large void and large overdensity — see Figure 2.  Here, I’ll explain the four approaches they model.

As background to these approaches, we should know that because the bundles are very narrow, the lensing (relative magnification or demagnification) they experience comes mostly from traveling through gravitational potential gradients created by objects outside the bundle. This is called Weyl focusing, in contrast to Ricci focusing (focusing due to mass inside the bundle). 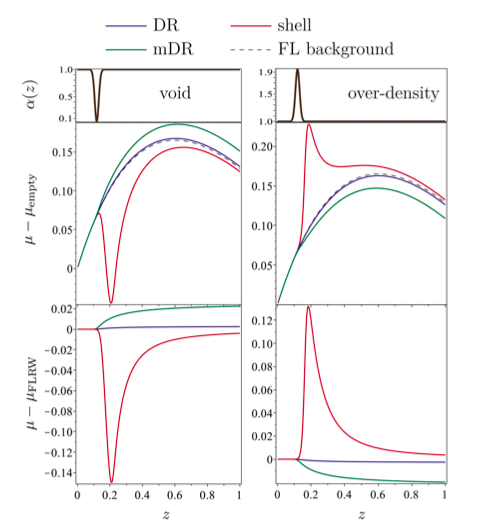 Simulation of how bundle's passing through void (left) and overdensity (right) affects distance modulus in each approximation. DR is Dyer-Roeder, mDR modified Dyer-Roeder, FL background follows the approach of Weinberg as discussed in the text. Fig. 2 in the paper.

So what is the upshot? Clarkson et al.’s results for distance modulus are highly dependent on which approach is used, as Figure 1 also shows! Indeed, the differences between the models are large enough to be significant for the type of cosmological questions SNIa are used to ask. So Clarkson et al. conclude that “the old problem of modeling narrow [bundles of light] beams remains unsolved. . . [but must soon be] to ensure precision cosmology delivers correct answers as well as precise ones.”