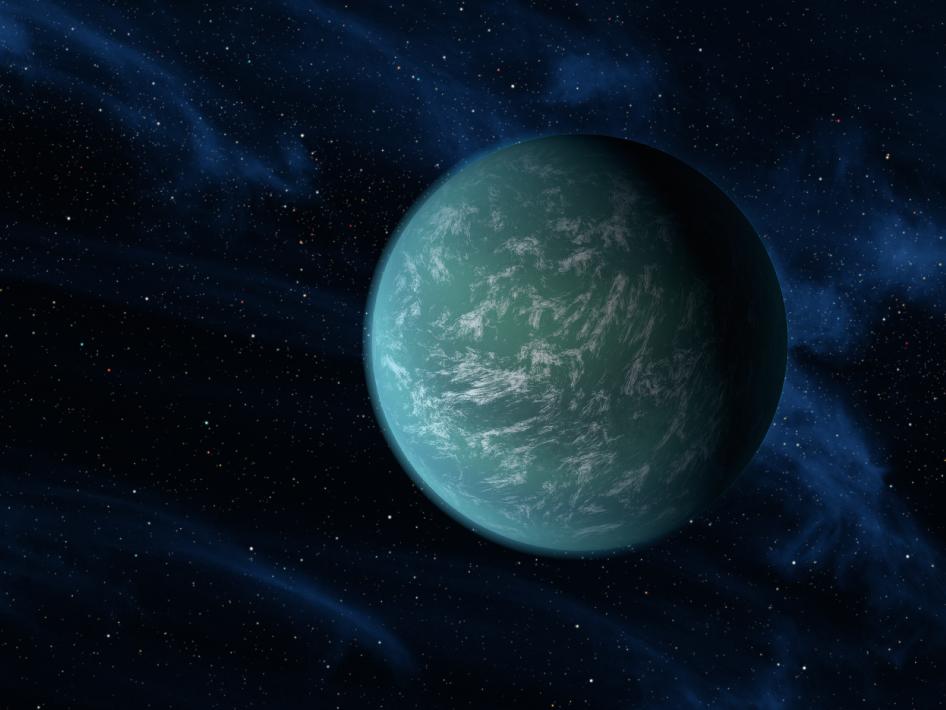 An artist's depiction of the transiting planet Kepler-22b. From NASA/Kepler.

Yesterday, NASA confirmed another new exoplanet from the Kepler mission, Kepler-22b. From some of the headlines, you’d think it was time to pack your bags: “Newly discovered planet ‘Kepler-22b’ is eerily similar to Earth” (NY Daily News, 12/5), “Kepler 22b – the ‘new Earth’ – could have oceans and continents, scientists claim” (The Telegraph, 12/6), “NASA Finds Planet in ‘Habitable Zone’ That Could Sustain Life” (Time.com, 12/5). Then of course, there were also these two: “The sad self-obsession surrounding NASA’s Kepler-22b discovery” (CNET, 12/5) the title of which is intriguing enough for a look, and “Exoplanet Kepler 22b: why do these planets get such dull names?” (The Telegraph, 12/6), a sentiment probably shared by all.

Kepler-22b is a “super-Earth” planet orbiting in something that astronomers like to call the “habitable zone” of its Sun-like star. That means it’s a planet larger than Earth, but smaller than other planets in our Solar System (which is to say, Neptune or Jupiter, the two other Solar System planets that have become the prototypes by which exoplanets are categorized). Kepler-22b has a radius 2.4 times Earth’s. If it were to have a composition similar to Earth’s, it would have a mass 13.8 times Earth’s. It’s orbiting a star that is only a bit cooler and smaller than the Sun. The distance at which the planet orbits is such that if the planet has an atmosphere similar to Earth’s, its surface temperature would be a balmy 72 deg F (22 deg C). At this temperature, liquid water could exist on Kepler-22b and life as we know it could survive there.

The discovery of Kepler-22b is undeniably exciting. It’s the first planet located solidly within the habitable zone, it’s one of only a small number of super-Earths known, and compared to other transiting exoplanet discoveries, it orbits on a very long period (290 days). The planet has been validated by observations with the Spitzer space telescope and by analysis with the BLENDER program, which showed that false positives are very unlikely (other detections of planets in this regime have not held up, so these tests are very important).

What it’s not is a twin to our Earth. Beyond its radius and orbital period, Kepler-22b is a big unknown.

After the initial sensation, most articles do go on to at least mention the uncertainty. The biggest is that we don’t know what it’s made of: a planet the size of Kepler-22b could conceivably be a rocky planet, but it could also be more like Neptune or have a water-dominated composition. If Kepler-22b is actually a “mini-Neptune” it certainly wouldn’t be habitable to life as we know it. If it’s a “water world” then we could at least appeal to certain science fiction movies. (There has been similar discussion surrounding the planet GJ1214b, which we’ve written about here, here and here.) The second unknown is that even if it is a rocky planet, what is its atmosphere like? How much heat the atmosphere traps on the surface is an important determinant of what the surface temperature really is.

There is the possibility of being able to answer these questions of atmospheric and bulk composition in the future (and rest assured people will try). However, current technology can’t take us very far: due its small mass, radial velocity follow-up will likely only provide an upper limit on the mass while atmospheric characterization (using spectroscopy) is not feasible for a star so far away with a planet so small. So today, all we know is that Kepler-22b is a smallish planet that could be made of rock and could have a surface temperature that would allow liquid water. Although no one should pack their bags, the confirmation of Kepler-22b is an important milestone towards the discovery of a true Earth twin, an indication of the success and hard work of the Kepler science team and a very exciting discovery in its own right.