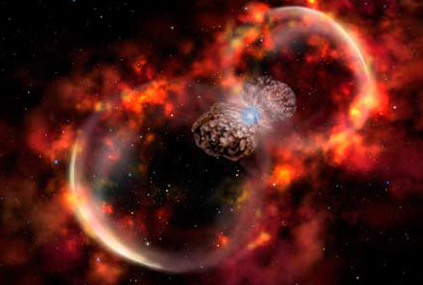 Supernova imposters
What looks like a supernova but isn’t one?  Not a rhetorical question! Giant eruptions of Luminous Blue Variable stars (LBVs) have luminosities just less than those of faint core-collapse supernovae (SNes) , and so have occasionally been mistaken for them.  In particular, in our galaxy there have been two in the last four hundred years: the giant eruption of P Cygni in the 17th century, and the Great Eruption of Eta Carinae in the 19th.  The paper we look at today focuses on the second, using light echoes (like sound echoes, they can arrive long after the event that produced them) to make new observations of the Great Eruption.

An exemplary imposter?
Eta Carinae’s Great Eruption was observed for twenty years, from 1838 to 1858, and for ten of those it exceeded the Eddington luminosity limit, emitting 10% of the energy of a typical core-collapse supernova (that is a ton of energy!) and yet somehow managing not to destroy itself!  During this period, Eta Carinae was the second-brightest star in the sky.

Traditionally, the Great Eruption is considered a prototypical example of the so-called “supernova imposters” (in addition to the two in our galaxy, there have also been about two dozen in other galaxies). The mechanism thought to underly the imposters is an opaque stellar wind driven by a sudden increase in the star’s luminosity.  This wind would in turn produce a minimum effective temperature of 7000 K and a spectrum similar to that for an A or F-type supergiant.  However, this paper questions that status by arguing that the mechanism behind the Great Eruption must actually be different from that thought to underly the “supernova imposters.”

The authors find that the Great Eruption is much more consistent with a supergiant spectrum between G2 and G5 (remember OBAFGKMLT?)  This corresponds to a lower temperature of around 5000 K (for comparison, our Sun is a G2 star with effective temperature 5777 K).  Indeed, their analysis rules out spectral types of F7 or earlier (earlier means higher temperature because the spectral order is also, more or less, an evolutionary track; stars cool and go from left to right on it, as, perversely, temperature decreases left to right).  The authors also point out that the opaque stellar wind idea fails to explain the high kinetic energy and fast blast wave at large radii inferred from observations (mainly in the optical and infrared (IR), with blast wave speed found using blueshift of features in IR spectrum).  Further, the opaque stellar wind model would imply strong emission lines, a feature the authors do not find in the observations.

So in short, the authors conclude Eta Carinae’s Great Eruption is unlikely to have been driven by an opaque stellar wind.  Instead, they suggest it might have been caused by a hydrodynamic explosion of unknown origin, a second model usually proposed for LBV explosions.  The absorption lines and temperature they observe are consistent with the opaque, cooling photosphere likely to follow such an explosion. What could have caused such an explosion?  That is a matter for radiative transfer simulations of the star, which now have new observational constraints to match in seeking to explain the Great Eruption.