The quest for identifying the dark matter particle is well underway. Many experiments are relying on different detection methods to look for this elusive particle. In this paper, we discuss the work of the ANTARES (Astronomy with a Neutrino Telescope and Abyss environmental RESearch project) collaboration, which is using a neutrino telescope to search for signals of dark matter annihilation in the Sun.

Most of the matter in the Universe is not visible, it does not interact light. Think about it: casting light on something and seeing what we get back is the main physical mechanism we have of knowing it is there. In astronomy, we observe the light emitted by the object or the inverse, we notice light being absorbed by an object.  However, most of the matter in the Universe will not allow us to perform that experiment. We know of its existence because of its gravitational influence on the evolution of the Universe, the dynamics of galaxies or its lensing signatures. The leading theory for “dark” matter is that it is made of WIMPs, weakly interacting massive particles that naturally arise in supersymmetry (SUSY), which is an extension of the Standard Model of particle physics.

If dark matter is indeed a supersymmetric particle, when two dark matter particles collide, they annihilate into other particles (including photons, neutrinos and antimatter). Indirect dark matter experiments search for those products by looking at regions where we expect the dark matter density to be high. WIMPs can become gravitationally trapped in the center of the Sun, annihilate and produce neutrinos that can escape and reach the Earth. Neutrino telescopes, such as ANTARES, can be used to search for this signal.

How does ANTARES work?

Neutrino telescopes do not resemble optical telescopes at all. When neutrinos interact with the Earth or the atmosphere, they produce charged particles (muons). If the particles have very high energies (10 GeV-100TeV), they emit Cherenkov light as they traverse water.

The  ANTARES telescope is located at ~2500 m underwater in the Mediterranean Sea. Its array of photomultipliers collects the Cherenkov light with the aim of reconstructing the direction of the original incoming muon. The figure below shows a diagram of the experiment underwater. 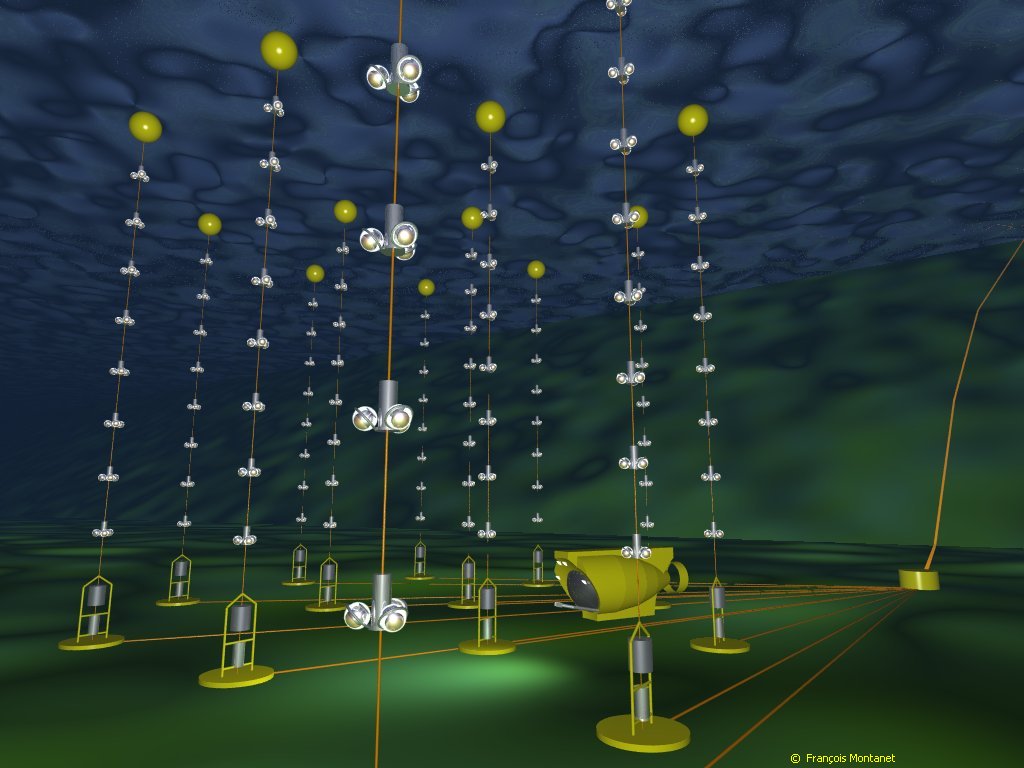 The experimental setup of the ANTARES neutrino telescope: a dozen of detection lines of 450 m in length and separated by approximately 70 m from one another, with 75 photomultipliers each. Credit: F.Montanet, CNRS/IN2P3 and UJF for Antares. Produced with POV-ray.

As usual in this business, one needs to be careful in distinguishing signal from background. In this particular case, cosmic rays entering the Earth atmosphere can produce downgoing muons and both downgoing and upgoing neutrinos that could mimic the muons from dark matter annihilation. The most significant contribution to the background comes from the downgoing atmospheric muons. To avoid them, the best strategy is to only take into account measurements that were triggered at night, when the muons from dark matter annihilation come from the opposite direction to the background, from below the detector.

Moreover, to increase the signal-to-background ratio, one can place a cut on the inferred direction of the muons (not the original neutrino!) with respect to that of the Sun. This cut depends on the energy of the muon: at high energies, the direction of the muon and the neutrino are more similar than for low energy muons. The trade-off is that a more stringent cut on the direction gives a cleaner signal, but at the same time it removes information from the low energy muons. Nevertheless, there is always a remaining background signal that you need to model to see if the data are in excess of (which would be a detection of dark matter annihilation) or consistent with the background.

From January 2007 to December 2008, the experiment took an effective total of 294.6 days of data. We reproduce here Figure 4 in the paper, where the main results are presented. This figure shows the distribution of separations between the inferred direction of the muon and the Sun. The number of muons coming from the direction of the Sun is consistent with the background expectation. There is no detection of dark matter annihilation in the Sun by ANTARES. In the next section, we explore what constraints can be placed on the properties and models of dark matter particles using these results. If you are brave enough, carry on reading! 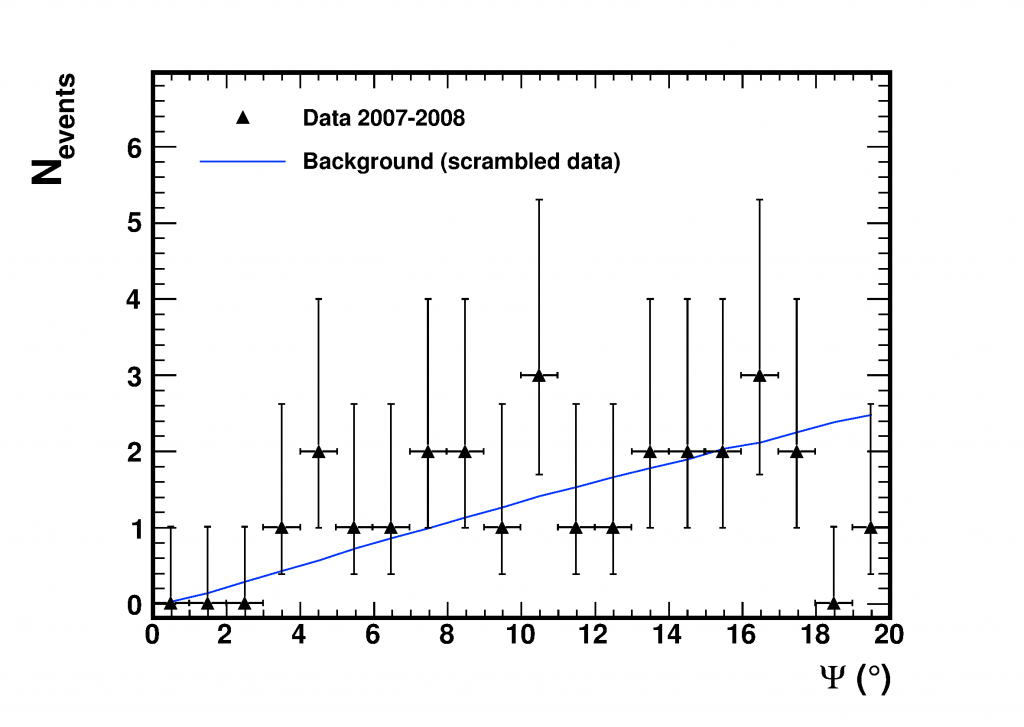 Distribution of incidence angles of inferred muon tracks with respect to the direction of the Sun. The solid blue line is the expected background and the black triangles are the data, with 1-sigma Poissonian error bars. Figure 4 from Adrián-Martinez et al. (2013).

For the brave at heart: Constraints on SUSY parameter space

This information comes in handy. In the interior of the Sun, the rate of dark matter annihilation depends on the rate of capture of dark matter: you need to be capturing dark matter to have anything to annihilate. This is just an equilibrium argument, but a very useful one, since it allows us to set constraints on the cross-section of the interaction dark matter with nucleons in the Sun, most abundantly, protons. The cross-section has a spin-dependent (SD) and a spin-independent (SI) contribution, based on whether the interaction depends or not on the spin of the nucleon. We already have very stringent limits on the SI cross-section of the interactions by means of direct detection experiments. Neutrino telescopes are thus ideal for constraining SD WIMP-proton cross-sections. For a more technical explanation, see this paper.

In the left panels of Figure 6 (reproduced below), the ANTARES collaboration presents their bounds on the parameter space defined by the SD cross-section of the interaction and the WIMP mass. Overall, even if we have not had a detection of annihilating dark matter in the Sun, the constraints on the parameter space of SUSY models are getting tighter day by day.

90% confidence limits on the spin-dependent WIMP-proton cross section as a function of WIMP mass. The two panels correspond to different SUSY models. The grey areas are the parameter spaced allowed by the theory. The results from ANTARES are shown in solid red, blue and green for the different annihilation channels. The other lines shown correspond to results from other experiments. Figure 6, left panels, from Adrián-Martinez et al. (2013).