Paper: A preliminary reconstruction of the orbit of the Chelyabinsk Meteoroid

Russia has it rough when it comes to cosmic hazards. In 1908, a massive meteoroid exploded over the Tunguska River in Siberia with the force of many nuclear bombs, leveling millions of trees and painting a frightening picture of a similar calamity in a populated region. And last week, it happened again. You’ve probably seen the amazing video of a meteoroid streaking across the sky over Chelyabinsk on February 15, 2013, damaging thousands of buildings and injuring hundreds of people. While the arrival of the Chelyabinsk meteoroid (known as Chelby, as of now) surprised everyone, NASA scientists had been tracking the (much larger) near-Earth asteroid 2012 DA14, which, coincidentally, passed between Earth and our network of geosynchronous satellites on the same day. These simultaneous events reminded everyone that we face danger from space.

Does the universe hate us? I don’t know. But I can tell you that a pair of Colombian scientists has made the first attempt to figure out Chelby’s orbit. How did they do that? What are we doing to make sure that none of Chelby’s cousins wipe us out?

Most astrophysics research is based on observations from telescopes. Analysis of Chelby’s orbit, however, relies on an eclectic mix of data. Dashboard cameras are ubiquitous in Russia for a variety of (hilarious) reasons. Images from these cameras are breathtaking, but, unfortunately, they have limited scientific utility, since it’s nearly impossible to know the exact position and orientation of these vehicles. These scientists used footage from a stationary security camera in Chelyabinsk’s Revolution Square. Because Chelby was brighter than the Sun (!), it cast obvious shadows from traffic signs, light poles, and the occasional train. Using distance-measuring tools on Google Earth and a whole bunch of trigonometry, they calculated the azimuth and elevation of Chelby at two significant times. First, they recorded where Chelby’s light overpowered that of the Sun (the brightening point), creating new shadows in the video. Second, they noted Chelby’s demise—the dimming of light associated with fragmentation. 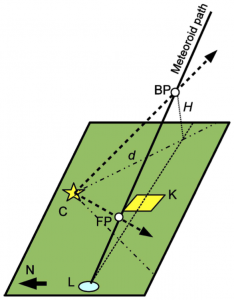 Cartoon of observations used to constrain Chelby’s trajectory. We have images and eyewitness testimony from Chelyabinsk (C) and Korkino (K) and we think a piece of Chelby hit Lake Chebarkul (L). We use C and K to pinpoint the height (H) and distance from Chelyabinsk (d) of the brightness point (BP). With L and the fragmentation point (FP), we have Chelby’s path through Earth’s atmosphere.

The authors needed at least two more observations to pin down Chelby’s orbit. Fortunately, videos from the city of Korkino (~35 kilometers south of Chelyabinsk) show Chelby passing through local zenith (straight up) when it exploded. Also, people found a hole in an ice-covered lake ~85 kilometers southwest of Chelyabinsk that wasn’t there before Chelby arrived. No other fragments of Chelby had been recovered and verified, so the authors assumed that this hole represents the intersection of Chelby’s trajectory with Earth’s surface. This is not certain! While Chelby’s center of mass should have maintained its trajectory after fragmentation, individual pieces of Chelby could have been quite dispersed.

In this study, the authors used these three observations to constrain the location (height, latitude, and longitude) of Chelby at the brightening and fragmentation points. Using the timestamp on the security camera footage, they calculated Chelby’s average velocity, which they assumed is equal to its orbital velocity near Earth. They assumed that atmospheric friction is negligible because Chelby was moving so fast, although that’s just a naive approximation. With the position and velocity of Chelby at Earth fixed, the authors switched to numerical computations involving widely used software routines. Taking into account the gravity from Earth, Moon, and the other seven planets, they integrated Chelby’s orbit backwards for four years. Because each of the measurements used to reconstruct Chelby’s trajectory had some uncertainty, the authors computed a range of possible orbits. Specifically, they performed a suite of Monte Carlo simulations, in which they started their numerical integration of Chelby’s orbit from many different initial conditions, sampled randomly from the distribution of possible values.

Scientists categorize near-Earth objects into many different groups. For example, the Atiras asteroids have orbital semi-major axes <1.0 astronomical units (AU), placing them entirely within Earth’s orbit. (Earth orbits the Sun at a distance of roughly 1 AU. We talk about semi-major axes because planetary orbits are elliptical.) The Amors group of asteroids, in contrast, orbit entirely between Earth and Mars. Two groups of asteroids regularly cross Earth’s orbit: the Atens and the Apollos. Asteroids in the Atens group have shorter semi-major axes than Earth, but they have eccentric orbits and hence pose a threat. 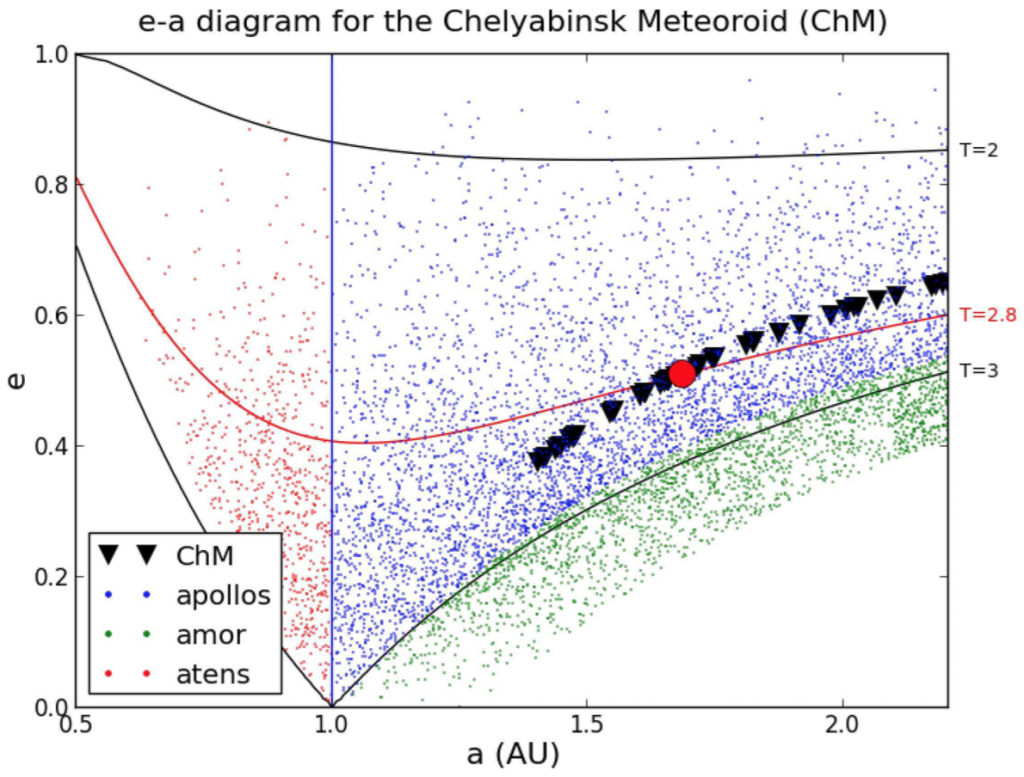 Plot of orbital eccentricity (e) and semi-major axis (a) for asteroids in the Apollos, Amors, and Atens groups. Earth has a = 1.0 AU and e = 0.02. Possible orbits for Chelby are shown as black triangles. Plausible values of a range from ~1.25-2.25 AU for Chelby, meaning it almost certainly came from the Apollos. The three solid lines represent objects with constant values of the Tisserand parameter, a dynamical quantity that remains approximately the same even as a and e change as asteroids encounter solar system objects.

Chelby’s parent body, according to this study, was part of the Apollos—Earth-crossing asteroids with longer semi-major axes than Earth. Asteroids don’t necessarily stay in the same groups forever. For example, the near-Earth asteroid 2012 DA14, which passed by Earth as Chelby impacted, is currently part of the Apollo group, but gravitational interactions with other solar system objects will shift its orbit over the next decade or two, eventually pushing it into the Atens. 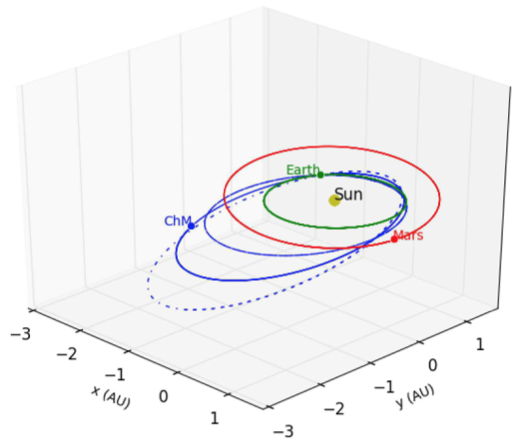 Schematic of Chelby’s reconstructed orbit, which crosses the orbits of Earth and Mars. The median result is the central blue line and the two other blue lines represent ±1 standard deviation in the simulation results.

The semi-major axis of Chelby’s parent body is highly unconstrained because of the uncertainty in Chelby’s velocity. Incorporating data from more observations, along with detailed modeling of the effects of Earth’s atmosphere on Chelby’s trajectory, may allow a more precise determination of these orbital parameters. However, there is little doubt that Chelby was an Apollo, at least until recently.

What About Next Time?

Reconstructing Chelby’s orbit is a great detective story. Who doesn’t love using real science to interpret amateur video of giant explosions? But all of this is less than satisfying. After all, we’d like to know about giant killer rocks from space before they impact Earth. When the Big One comes, à la Armageddon, we won’t be able to rely on footage from security cameras and paranoid drivers, because said cameras and drivers will have perished in a conflagration. Fortunately, many people are very concerned about this problem and working to find realistic solutions. But that, dear readers, is a topic for a different post.