Although the South Pole has been continuously inhabited since 1957, the physical station has gone through several incarnations in the last 50 years. The first station was built by the Navy and lasted for about 20 years. Eventually it was buried by drifting snow, and a more permanent (and photogenic) station was built in 1975: a geodesic dome surrounded by auxiliary buildings. Apart from the winterovers who lived inside the dome, most of the summer staff lived outside in “summer camp,” consisting of Korean War-era tents known as Jamesways. 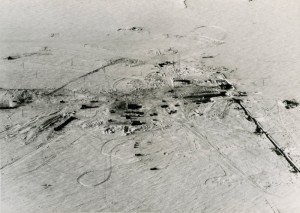 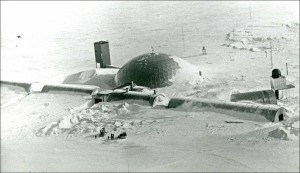 Finally, an elevated station that would not be buried was built, and the dome was dismantled in 2010. It has the capacity for about 150 people, although some still stay out in tents during the summer season. Let’s take a quick tour!

After stepping off the LC-130 Hercules, we get our first look at the new station. It’s modular and built on stilts, meaning it can be raised when enough snow accumulates. Walking closer, we are officially welcomed by the US Antarctic Program. The main entrance is known as DA, or Destination Alpha. DZ — Destination Zulu — is another entrance on the other side. 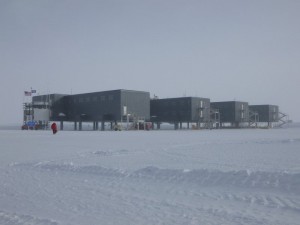 The station viewed from the runway 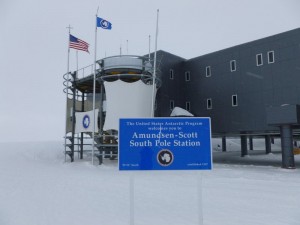 The two-story station is composed of two long hallways with four modules jutting out from the sides. It’s somewhat of a cross between a space station and a high school.  We enter DA through insulated double doors, and are greeted by display cases of Pole memorabilia. Many of the old Pole markers are displayed here. 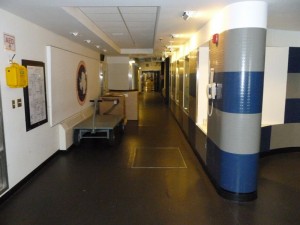 Looking in from DA 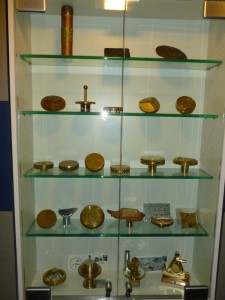 To our right is the recreation area: a gym and a band room. We keep walking down the hallway and encounter the generator room, followed by a library, an arts and crafts room, and a greenhouse. During the winter, this is the only source of fresh food available!  There’s also a post office where we can send postcards back home and receive care packages. 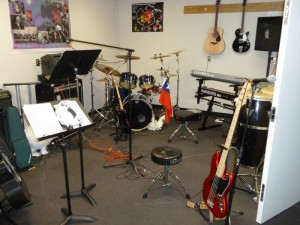 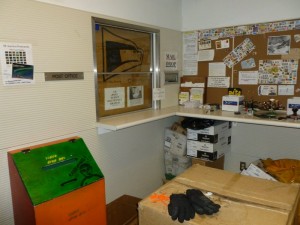 Climbing upstairs, we arrive at the heart of the station: the galley! The food is surprisingly good, and we have several full-time cooks. The only caveat, of course, is that most of the food has been frozen, and may have been in that state for a long time. Just outside the galley is an impressive array of recycling bins.  Since all trash must be flown out, we are very recycling-conscious at Pole, and adhere strictly to a “trash matrix” which tells us exactly which bin any waste belongs in. 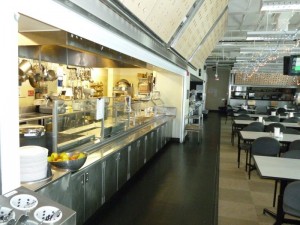 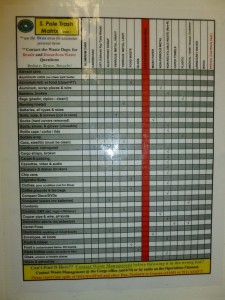 The South Pole trash matrix, telling you exactly where you can throw things away

Walking further down the second level, we find the infirmary and computer lab. Most of our time in station, however, is spent in the next room down.  The science lab hosts workspace for many of the experiments at Pole. If we just have some computer or analysis work to get done, it’s much more convenient to do it here as opposed to trekking outside to the observatory. Across from the science lab is a lounge, hosting a pool table and a movie room stocked with every VHS tape you could possibly want to watch (yes, DVDs exist too). 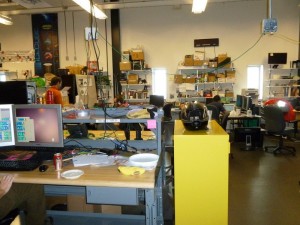 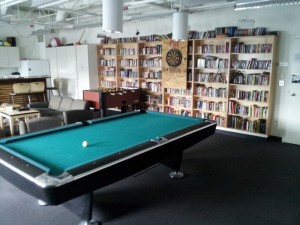 Not as much science happens here

Finally, we can walk over to one of the residential modules and take a look at a typical dorm room in the station. If you’re lucky, you’ll get a nice big room inside the station itself.  However, there’s always the chance that you’ll end up in a hypertat (an ironically-named High Performance Habitat) — a temporary housing unit 5 minutes from the station. 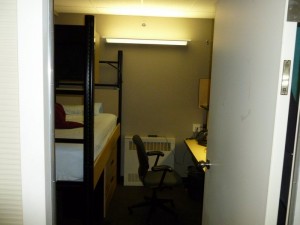 My dorm room in the elevated station 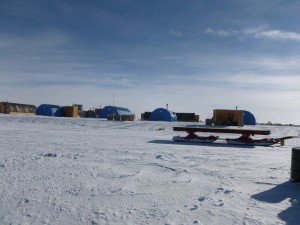 Walking out from the station 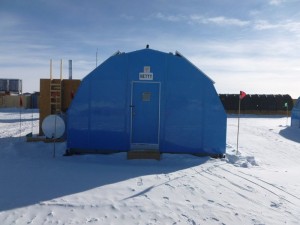 One of the hypertats (named Fred, Barney, Wilma, and Betty) 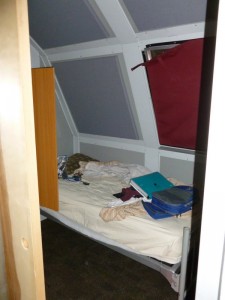 My (much less comfortable) room in the hypertat

Even though being at Pole is a lot of hard work, we still find time to relax. There are quite a few traditions; one that happens every year near Christmas is the Race Around the World. It’s a normal footrace with one twist: you can take any mode of transportation you want. So in addition to regular runners, people will ski or snowmobile around the course. I, along with another grad student on my experiment, decided to try a new way to get around. 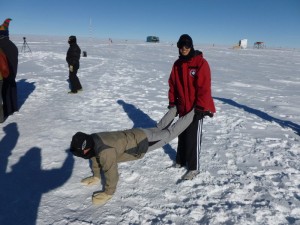 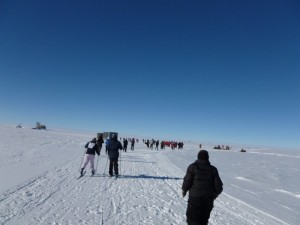 In the middle of the race, after abandoning the wheelbarrow formation (note the skiers in front)

There is also the traditional Pole moving ceremony. Since the ice moves about 30 feet each year, the geographic pole marker is moved every January 1st. The entire station gathers around the new location and a flag is passed around before the marker is unveiled. 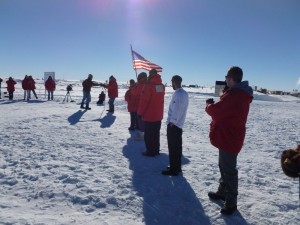 Passing the flag during the pole moving ceremony 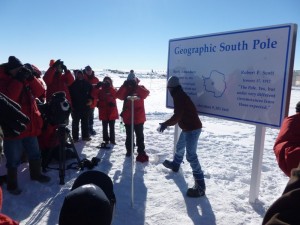 As much fun as Pole is, after a month it’s time to head back home — our data isn’t going to analyze itself! The trip back is much the same as on the way down, featuring several days of waiting for a flight out of McMurdo and the option of vacationing in New Zealand before heading stateside. Once we get back, however, it’s time to start preparing for next season!

Being at the South Pole has been an incredible experience. It’s a testament to human ingenuity that we can not only survive, but thrive in one of the world’s harshest environments, all while gathering data that answers the most fundamental questions about the universe. I can’t wait to go back! 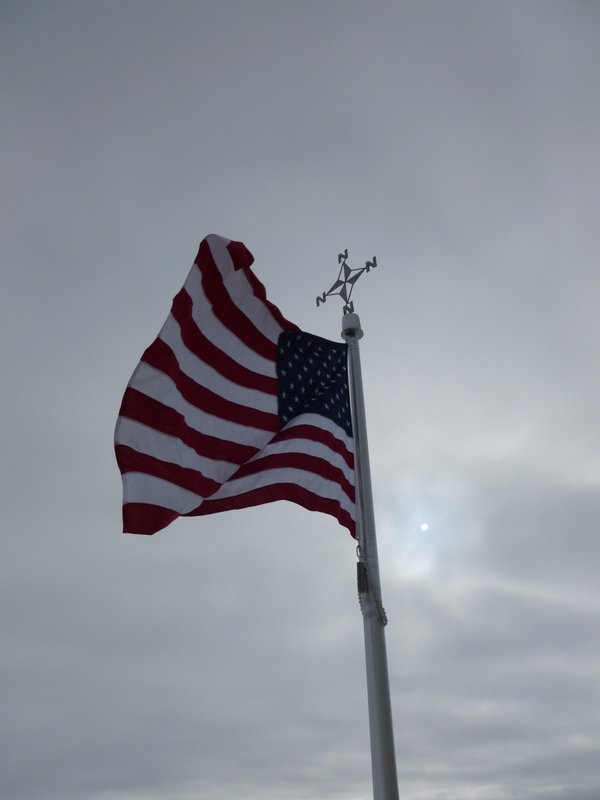 Leave a Reply to George A. Heubach Cancel reply