In today’s paper, Rennan Barkana discusses how an until-recently unknown effect in early Universe cosmology should make it possible to see back farther into stars’ and galaxies’ histories than ever before. To understand how, we need to know a bit about the early Universe.  What follows is a lightning introduction.

First, one piece of terminology: reionization.  Reionization refers to the time when the Universe became ionized (electrons separated from protons, so no more neutral atoms, only free electrons and protons whizzing around) for the second time.  Why second time?  Well, the key fact here is that the Universe has been, since its beginning ~13.7 billion years ago, expanding.  So, as you look backwards in time, the Universe was smaller, hotter, and denser than it is now.  Hotter means more energy was available to allow the electrons in atoms to whiz fast enough to escape their protons.  So, as you go back early enough in time, the Universe was all ionized.  This was the case between 0 and 300,000 years after the Big Bang.

After that, the Universe became sufficiently cool that the protons and electrons could recombine, so it was no longer ionized.  This remained so until enough stars and galaxies had formed to radiate energy sufficient to heat patches of the Universe and reionize them.  This era is the epoch of reionization, and occurred about 500 million years after the Big Bang. It is still not completely understood: there are many complicated ways stars can affect the surrounding gas, and many different assumptions that go into modeling both this and even the formation of the stars themselves. 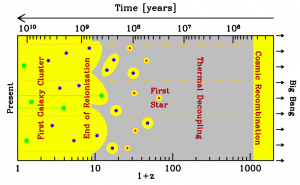 This shows the history I describe in the first few paragraphs. Present day is at left, Big Bang at right. Gray means the Universe (specifically, hydrogen gas) is neutral, yellow means ionized. The dotted orange lines represent light coming to us from the cosmic microwave background, a source of light formed all at once 300,000 years after the Big Bang, for reasons I won’t go into here. 1+z on the bottom of the figure is basically a measure of how much smaller the Universe was in the past: higher z implies smaller radius for the Universe. Figure reproduced from Barkana 2013.

One major probe of reionization is the 21 cm line.  This just refers to the energy of photons produced by a particular change in hydrogen atoms.   (Remember, energy is proportional to 1/wavelength, so a statement of wavelength can be translated to a statement of energy).  Protons and electrons have spin, and they can be spinning in the same direction or in opposite directions.  When the direction goes from anti-aligned to aligned, a photon is emitted.  Because this can only happen if the hydrogen is neutral, how many photons we see with wavelength 21 cm coming to us from a particular time in the Universe’s history probes how much hydrogen was neutral at that time. (Remember, looking out is looking back in time because light travels at a finite speed, so seeing photons coming to us from far away is seeing photons from a long time ago!)  Because the line is from neutral hydrogen, it can also, in principle, probe the time before reionization, around 200 million years after the Big Bang.

However, the 21 cm signal from this earlier era, which is when the first galaxies formed, has been thought to be far beyond the sensitivity of current and even intermediate-future instruments. This is where Barkana’s paper, an invited review for a recent cosmology conference in Marseille, fits in.

Basically, in the rightmost (earliest in time) yellow region on the graphic at left, when the Universe was ionized and had not yet ever been neutral, regular matter (known as baryons), stuff such as composes you and me, was not able to fall under the influence of gravity because it was actually supported by the pressure of light itself (“radiation pressure”).  Today, because the Universe is much larger than it was then, radiation pressure cannot do this, but when the Universe was a factor of 1000 smaller, and ionized, it could.  The light providing the pressure was primoridal: not produced by any stars, it just was an initial component of the Universe, just as were matter and dark matter.  The fact that the Universe was ionized is also key here: light interacts very strongly with free electrons (and the protons follow the electrons because opposite charges attract), but much less so with neutral atoms.  So it was only in the first yellow region that light could support baryons against gravity: once the Universe cooled enough that it became neutral, the baryons began to fall under gravity.  This epoch is called “cosmic recombination”, even though it is really the first time protons and electrons combine into neutral atoms. 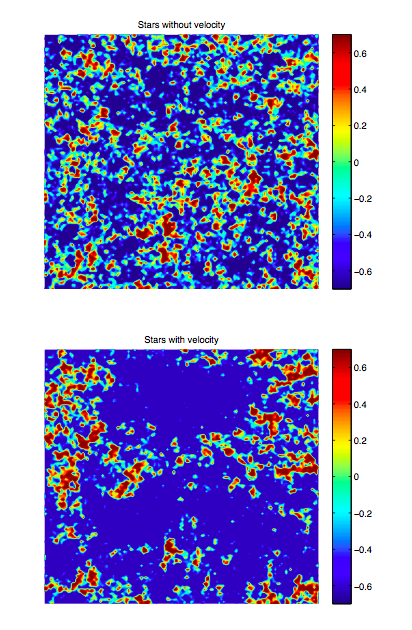