You have probably heard that the Kepler Space Telescope, which has discovered various surprising planetary systems as well as small planets in the habitable zones of their stars, suffered a major technical failure last week.  According to the Kepler Mission Manager Update, engineers determined that reaction wheel #4 failed to restart after the spacecraft entered a self-preserving “safe mode.”  In this post, I will discuss what happened to the spacecraft and how this will affect our ability to find Earth-sized planets.  The short story is that the space telescope probably won’t detect any new Earth-sized planets, but we can continue discovering such planets in the wealth of existing data.

What are the reaction wheels anyway, and why does Kepler need them? 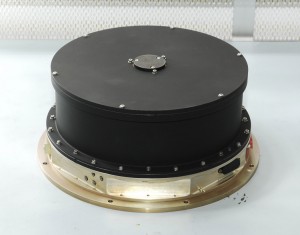 The reaction wheels, capable of spinning at 4,000 rpm, generate the angular momentum necessary to control and stabilize the telescope pointing.  They are a mechanical type of gyroscope manufactured by Goodrich Corporation and contracted for the Kepler Space Telescope by Ball Aerospace.

The detection of Earth-sized planets requires extremely precise pointing of the telescope.  This is because the transit of an Earth-sized planet across a sun-sized star results in a change in the star’s brightness of 1/10,000 (or 100 parts per million).  Kepler was designed to detect changes in brightness of 20 parts per million, which meant it was capable of finding Earth-sized planets and smaller.  To save on bandwidth, Kepler only downlinks data from the pixels associated with 156,000 target stars out of the millions of stars in the Kepler field.  Data from an “aperture” of pixels around each target star are downlinked to Earth, and computer programs on Earth measure the brightness of the star based on the light that hit the pixels in the aperture.  If the telescope pointing is not good enough to keep the target stars in their respective apertures on the pixels, it is impossible to measure the brightness of those stars with a precision of 20 parts per million.

Can the pointing of the spacecraft be restored?

Not to the precision required to detect changes in brightness of 20 parts per million.  The Mission Manager Update offers the possibility of using the thrusters to help the telescope maintain its pointing, but it seems unrealistic to expect a crude thruster to achieve the precision of a gyroscope.  Although it might be possible to point Kepler well enough to do some new science, it seems unlikely that Kepler will be able to continue discovering Earth-sized planets. 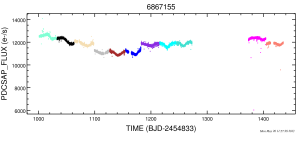 Light curve of several “quarters” of data of the Kepler target star KID 6867155. A planet candidate has been identified from transits in the light curve, but more follow-up is needed to confirm the planet. Data from the NexSci Exoplanet Archive.

Can we still find Earth-sized planets (in the habitable zone and elsewhere)?

Yes!  Kepler has already given us a plethora of data that will feed hungry scientists for years to come.  Buried within the 156,000 light curves of stars spanning four years are many of the tell-tale “dips” indicating the transits of planets–including small ones.  The current challenge is to process the data in a manner that teases these tiny signals out of the noise and unwanted signals of stellar variability and spacecraft systematics, much like finding a needle in a haystack.  The game of detecting Earth-sized planets has moved from the telescope to the computer, and I invite all of you enthusiastic data processors to take up the challenge!  You can find and download the light curves of the Kepler stars from the NexSci Exoplanet Archive.

Other types of observational follow-up present major opportunities for confirming and characterizing Earth-sized planets given the existing Kepler data.  Radial velocity measurements of host stars, stellar spectra, adaptive optics imaging, and speckle interferometry help rule out false positive scenarios and better characterize the planets and their stars.  Additionally, transit timing variations in the Kepler data can help characterize the architectures multi-planet systems.  Describing each of these follow-up methods is outside the scope of this article, but I encourage you to leave a comment if you are curious about them.

What are the major repercussions of having only four years of data instead of eight?

The “extended” Kepler Mission was supposed to run for eight years.  (The original mission design was for 3.5 years, and Kepler exceeded this!)  Eight years would have yielded twice as much data on Earth-sized planets, resulting in a square-root-of-two improvement in our ability to extract their transit signals from the noise.