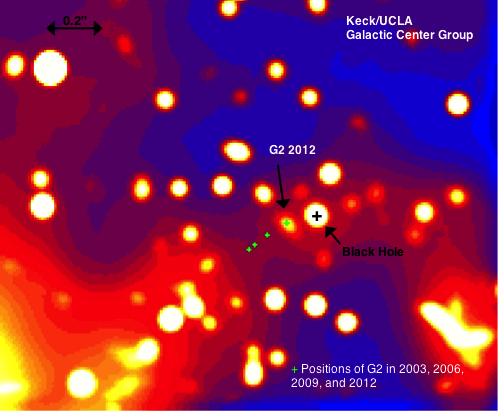 Gas cloud G2 as observed by the UCLA Galactic Center Group with the Keck Telescope in 2012. Stellar black holes or neutron stars are too faint to be observed directly, but many probably orbit the black hole.

In the center of our galaxy, a small object has created quite a storm. An object believed to be a gas cloud and affectionately termed G2 was discovered late in 2011. In the following year, the gas cloud hypothesis was questioned, with other authors suggesting the object may be a low-mass star with a strong stellar wind or a young star surrounded by a protoplanetary disk. Recent observations with the Keck telescopes suggest the object will reach a distance of 130 AU from the galaxy’s central black hole in the spring of 2014. In addition to the supermassive black hole, Sgr A*, at the center of our galaxy, there are also believed to be many stellar-mass black holes and neutron stars, old remnants of massive stars that once orbited Sgr A*. If G2 is truly a gas cloud, then during a close encounter with one of these objects we would expect the gas to be heated to extreme temperatures and be detectable both by X-ray and radio telescopes.

The authors of this paper attempt to determine when these disruptive events might occur. The authors begin by assuming the G2 cloud will follow the orbit determined by Kim Phifer et al, and that it has a diameter of 100 AU (not too different from the diameter of the Kuiper belt). They then estimate the cloud would be disrupted if a perturbing object came within 300 AU of G2, as this is the distance at which tidal effects would become important. The authors then simulate a collection of stellar remnants orbiting the supermassive black hole, and determine how many will come within 300 AU of the gas cloud.

The authors cannot estimate the exact number of disruption events as G2 passes through this cloud of stellar remnants, as the number of remnants near Sgr A* is unknown. However, they determine the relative probability of observing a disruption event as a function of time, as shown below. They find the Phifer et al. best-fit orbit produces an abundance of events in the spring of 2014. Therefore, an observer looking continuously at Sgr A* over this timespan would observe more tidal disruption events in early 2014 than at any other time if this orbit is correct. However, the time of the peak number of disruption events depends strongly on the exact parameters of the gas cloud’s orbit. Phifer et al. report a large uncertainty on G2’s periapse, or closest approach to Sgr A*. If the true orbit is on the outer edge of their allowed range, then the peak in disruption events will occur in September 2013, six months earlier than the best-fitting orbit. Thus, by observing these events, the orbit of G2 can be constrained! Of course, the authors only discuss the relative probability of disruption events, because they do not know the true number of stellar remnants near the central black hole. If this number is low, the absolute probability of an event will be low and it is possible that no tidal disruption events will occur. 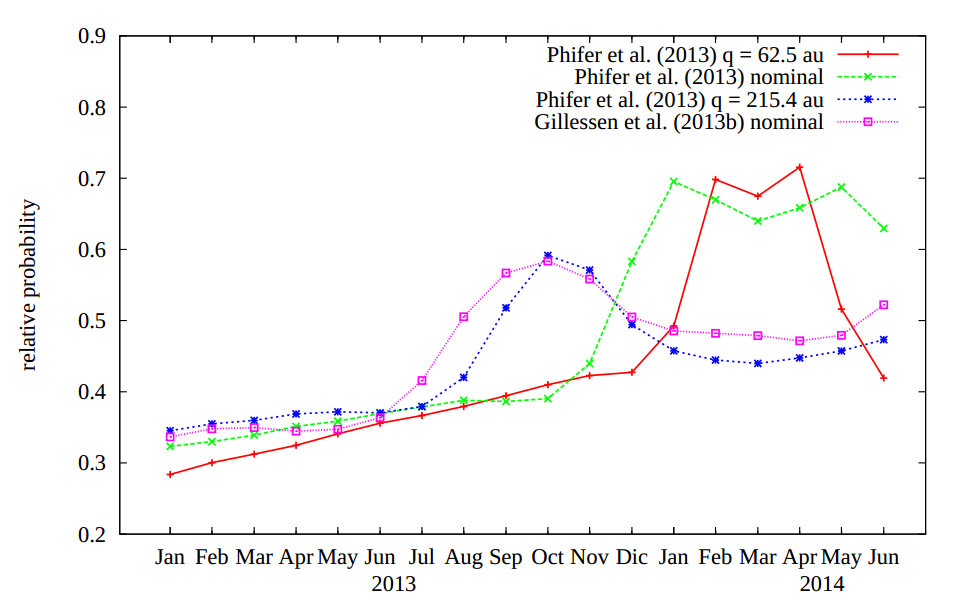 Relative probability of a disruption event between G2 and a stellar remnant as a function of time. The peak time of disruption events depends strongly on the orbital parameters of the gas cloud, meaning these events can be used to constrain the orbit.

Unfortunately, the authors note that winter is a very difficult time to observe the galactic center, as it lies behind the Sun. Some of these events may be invisible to us from the ground between October and February. This can be mitigated by observing from space, as telescopes such as Chandra are blocked by the Sun for a smaller amount of time. If G2 is truly a gas cloud, then by observing potential collisions between it and stellar remnants near the central black hole with Chandra and NuSTAR, we will gain significant insight into the orbit of G2, which can then help us determine its origins. Stay tuned!