A classic paper: how did the largest scale structure in the Universe form?

Note: this is a summary of a paper, but the scope is a bit broader than our usual!  A revised version with more definition and background will show up in our Topic Overview section soon!

Today we’ll look at a classic paper in cosmology published in 1996 that offers an analytical picture of how the largest scale structures in the Universe formed.  By large, I mean very, very large—much larger than the size of a typical galaxy (~100 kpc = 300,000 lightyears).  Galaxies are subject to complicated dynamics: supernovae can explode and eject gas, suppressing star formation, or compress gas into clumps, accelerating it; stars themselves can heat and ionize gas, slowing down subsequent star formation,  . . . the list goes on.  But on the scales this paper deals with, ~100 Mpc = 300 million lightyears = 1/30th of the observable Universe, the actors and the play are both much simpler.

To start the story, we have to remember one key fact: the Universe is expanding now, as Hubble’s 1927 measurements of Cepheid variables showed, and as many groups’ supernovae observations now confirm.  That means that, in the past, the Universe was smaller.  Now, there are four different important components in the standard cosmological model, Lambda-CDM.  1) Dark matter 2) baryonic matter 3) radiation and 4) dark energy.  Dark matter is just stuff that has mass but doesn’t interact with light (hence the “dark”); baryonic matter is stuff that has mass, and interacts with light and in all the other standard ways you can think of (it’s what you and I are made of), and dark energy is more or less a mysterious, roughly constant in space and time, amount of energy that permeates the entire Universe.  Each component’s density evolves differently with the size of the Universe.  Baryonic matter and dark matter go up or down in density as 1 over the 3rd power of the radius of the Universe, so into the past, as the radius gets smaller, their density rises.  Radiation’s density changes with 1 over the 4th power of the radius of the Universe, so into the past, radiation also rises in density, and faster than matter does.  Dark energy’s density remains roughly constant in time, so as we go back into the past, the density of matter and radiation completely overwhelm that of the dark energy.  So dark energy won’t be important at all for today’s paper (and indeed, that’s fortunate, because it was discovered only 2 years after the paper was written!)

The essential point, then, to take from the above is this: as you go early enough back into the Universe’s history (let’s say, about 10,000 years after the Big Bang, so 13.7 or so billion years ago), only the radiation density is important (recall it grows into the past faster than the matter density).  We call this “the radiation-dominated epoch.”  At this time, the Universe was so much hotter that all of the regular (baryonic) matter was ionized (electrons separated from their protons).  Electrons interact very strongly with light in a process called Thomson scattering, and so the radiation can exert pressure on the electrons.  The electrons in turn pull on the protons via Coulomb’s law (opposite charges attract), so in short, the photons and baryonic matter are tightly coupled.  Now, the baryonic matter contributes negligibly to the density (remember why!) and since for an ideal gas, pressure scales with density, we can neglect the baryons’ pressure.  The radiation, on the other hand, exerts a lot of pressure on the baryons. Both the baryons and the light feel the gravity of 1) the other baryons and 2) the dark matter.  This, at least, is true inside the causal horizon, defined as a sphere within which all points are in causal contact, i.e. light has had time to cross the sphere.  The radiation inside this causally-connected sphere has thus had time to flatten out any density inhomogeneities and so the radiation will not contribute any additional gravitational force—we need only consider the baryons and the dark matter.  What happens?

Well, the gravity of the baryons and dark matter compresses the baryon-photon fluid (remember, the light and baryons are tightly coupled by Thomson scattering), so we now have a loaded spring, waiting to spring outwards.  It does just that, with the pressure of the radiation serving to unload it, launching a baryon-photon pulse outwards.  This pulse is just like a sound wave propagating in air—sound reaches your ear when an over-density in the air (and corresponding region of higher pressure) has propagated to your eardrum and set its membrane in motion.  Sound waves are also called “acoustic oscillations”, and since the baryon-photon wave is really just a sound wave, it is called “the baryon acoustic oscillation,” or BAO.  This much is not new to Hu & Sugiyama—the advance of their work was to provide exact analytical formulae for putting the effects of the BAO into the cosmic microwave background (CMB) and the growth of density perturbations in the matter and dark matter, as well as including other effects such as potential decay and photon diffusion damping, which I’ll turn to now.  But first, let’s connect up with observation.  It’s well and good to understand the physics of the BAO, but how do we actually measure it in the Universe?

First of all, in the CMB.  The CMB is just radiation that is coming to us from recombination, 300,000 years after the Big Bang when the Universe became neutral for the first time and most photons were scattered for the LAST time (by the electrons at that time).  So, whatever the density fluctuations in the electrons (or the baryons, because the protons follow the electrons) were at that time, they get imprinted on the CMB.  Since the BAO are just sound waves moving baryonic matter around, they influence what the density fluctuations are.  Second, we can measure the distribution of galaxies today, and at different epochs in the (more recent) past.  Where the galaxies form is a complicated process in which the BAO are one factor; another is the dark matter, which I’ll turn to after providing a bit more detail on how the CMB and baryons evolve.

Let’s return to the CMB.  The basic picture has already been set: BAO move electrons around, imprinting a signature on photons last scattered 13.4 billion years ago.  Hu & Sugiyama put in several additional effects.  First, there is potential decay.  While the baryon-photon fluid is compressed by gravity, the potential decays because the Universe is expanding.  The expansion spreads out the density of dark matter and baryons providing the gravitational compression, so the spring is held more and more weakly in place.  This helps out the radiation pressure in de-compressing the spring.  Ultimately, potential decay leads to a factor of 3 increase in the amplitude of peaks due to the BAO in the CMB power spectrum (which just measures how correlated two different points in a map of the CMB are).  In contrast, this same potential decay effect DECREASES the amplitude of peaks in the matter power spectrum, probed, as I mentioned, by the distribution of galaxies in more recent epochs.

Second, there is photon diffusion damping and baryon diffusion damping.  During radiation-domination, photons collide with baryons a lot, and on small scales this can be considered a random process, so on small scales the photons smear out any inhomegeneity in density in the baryons.  The photons also collide with each other, smearing out small-scale temperature inhomogeneities between photons in different regions.  Furthermore, even without collision, just the movement of photons conducts heat from one region to another and tends to reduce inhomogeneities.  All of these combine to reduce the amplitude of peaks in the CMB power spectrum from the BAO on small scales.

Finally, after radiation-domination has ended and matter becomes the highest-density component, baryonic and dark matter’s gravity pulls photons from the CMB into its potential wells.  This is called “baryon drag”, and it creates an offset in the zero point of the BAO we measure.  Intuitively, it creates an offset to the zero point because, unlike the BAO, it is not an oscillatory process—all the photons only move radially inward in the matter potential wells.

So these are the most salient effects Hu & Sugiyama provide quantitative expressions for in the CMB.  Now, let’s turn to the matter.  Here, there are two important factors.  The first is called “velocity overshoot”, and it is just that fact that those bits of the density field with highest VELOCITY (and lowest density) when the baryons decouple from the photons are the bits that end up with highest DENSITY now.  The reasons why are technical, but this effect means that the peaks in the baryon power spectrum will be out of phase with those in the CMB (which just trace the density at the time of recombination, near enough to when the baryons decouple).  The second big player in the matter power spectrum is the dark matter, which is about 6 times as important by density as the baryonic matter.  Indeed, in model Universes where the baryon to DM ratio is even smaller, the velocity overshoot effect becomes unimportant relative to the DM’s effects.

To understant the DM’s effects, we need to understand how it evolves.  During radiation-domination, density inhomogeneities grow with log(t), t=time, fundamentally because of the interplay between gravity (which helps them grow) and an expanding Universe driven by radiation (which slows growth down).  However, after matter becomes the dominant density, but before the baryons decouple from the radiation, the baryons exert drag on the dark matter, because they are held in place by the photons.  So during matter domination, while the DM density inhomogeneities would normally grow as a power law (growth as t^p, p=1), again due to the interplay of gravity and the expansion of the Universe, this is slowed a bit by baryon drag, so p becomes 1-3/5 (b/m), b/m the baryon to total matter ratio.  After the baryons decouple, dark matter and baryons grow as one, and there is no longer any baryon drag so the growth of inhomogeneities returns to a power law t^1. 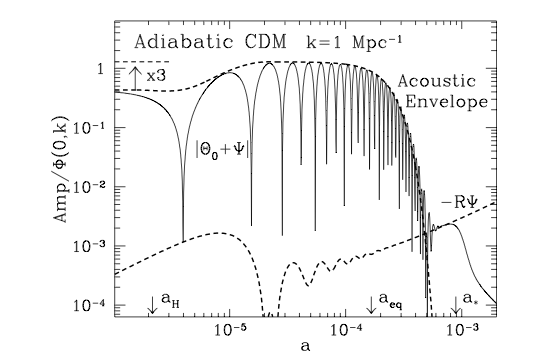 This shows how the photon perturbations evolve with scale factor a (the size of the Universe normalized to be 1 today). The oscillations are the BAO and the x3 at left is the boost due to potential decay as discussed above. The dashed curve at bottom is the zero point offset due to the photons falling into the matter potential wells after the recombination (when the photons are last scattered by electrons). The top dashed curve is the “acoustic envelope”, which is determined by the sum of all of the effects on the CMB I describe in the main text.

Ultimately, Hu & Sugiyama conclude thus.  The visibility of acoustic oscillations depends on the ratio of baryons to DM, and is most prominent at small scales (but greater than the photon diffusion scale).  The velocity overshoot effect makes the oscillations more prominent the smaller the scale, but go too small, and photon diffusion damping irons any inhomogeneities out.