In November 2012, a group of astronomers announced the discovery of a companion to the star κ Andromedae. From their analysis of the brightness of the companion, they estimated it had a mass near 13 times the mass of Jupiter. This mass is approximately where objects can burn deuterium, the defining characteristic of a brown dwarf. Unsure if the object was a planet (less than 13 Jupiter masses) or a brown dwarf (above 13 Jupiter masses), the authors called it a “Super-Jupiter.”

As we have discussed previously, planets are born very hot and cool in time, becoming fainter with age. A young, less massive planet is thus the same brightness as an older, more massive planet, as the more massive object has had more time to cool and become fainter. Therefore, the mass determined previously from the brightness of the Super-Jupiter depends on the system’s age; in this case, the age was estimated as approximately 30 million years because the star is located near the Columba association of giant stars, all approximately that age. Since the star is a B-type star, it has a very short lifetime, so it would not be surprising for the star to be very young and near where it formed, as it would not have very much time during its life to move around the galaxy.

Stars in a stellar association form out of the same giant molecular cloud, so they would be expected to have similar relative elemental abundances. Hinkley et al. note that stars in the Columba association have iron content nearly equal to that of the Sun. κ And, however, has only 40% of the iron content of the Sun. Moreover, the authors look at the motion of the star, and find that while it is only 80 parsec from the center of the Columba cluster, 30 million years ago it was still 74 parsec away, further than might be expected from a star forming out of the same molecular cloud. Therefore, it is likely that the star is an “interloper” that formed much earlier and just happened to be passing by the Columba association as it was forming. 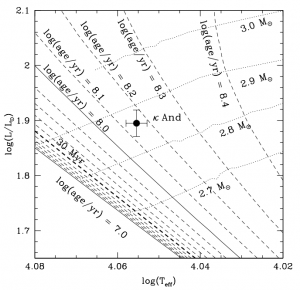 Position of κ And on the HR Diagram. Dashed and dotted lines show the age and mass (respectively) for one specific stellar model. This model predicts an age of 140 million years.

So What’s the Age?

If the star is not a member of the Columba association, then we can’t assume it’s the same age as the cluster stars, and its age must be determined by other methods. As we’ve mentioned previously, measuring the ages of individual stars on the main sequence is a difficult task. In this case, Hinkley et al. find the star has a higher luminosity and a lower surface gravity than would be expected for a main sequence star at a temperature of 11,400 K, as is measured for this star. Both of these measurements suggest the star has begun to evolve off the main sequence, on its path to becoming a red giant. Therefore, its age can be estimated.

We must rely on stellar models to determine the age of such stars, and these models are poorly constrained for stars significantly different from our Sun. One example is shown in the figure to the right. The data point shows the temperature and luminosity of the star (both of which are observed directly), while the dotted and dashed lines correspond to theoretical stellar masses and ages. By determining which theoretical model matches the observed quantities, the star’s fundamental parameters can be estimated: this model suggests an age near 2.85 solar masses and an age of 140 million years. By testing many different stellar evolutionary models, the authors use the distribution of estimated ages to determine an measurement and the uncertainty of the age (and mass) of this star. By combining several models, they find the star has an age of 220±100 million years and a mass of 2.8+0.1-0.2 solar masses. 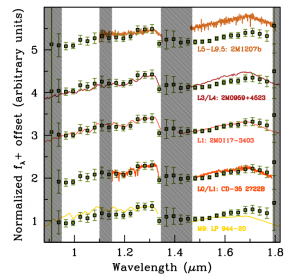 What about the Companion?

Since the estimate of the age of the primary star increases, the “Super-Jupiter” companion mass must be higher than previously estimated, as it has had more time to cool. By using the same evolutionary models as the discovery paper, Hinkley et al. determine the object to have a mass of 50+16-13 times the mass of Jupiter. This mass places the object firmly in the brown dwarf, not planetary, regime.

The authors also obtained a low-resolution spectrum using the “Project 1640” integral field spectrograph, which can be combined with an adaptive optics system to collect spectra of objects that might not be resolved with a traditional optics system. Their data is shown in the figure to the left. They find the brown dwarf is spectral type L1±1, consistent with what would be expected for a brown dwarf of this mass and age.

With all of this information together, it is very likely the companion is a brown dwarf of ~50 Jupiter masses, orbiting a star with an age of ~220 million years and a mass of ~2.8 solar masses. The best way to definitively determine this in the future without of the use of stellar models will be by measuring the position of the companion in time as it orbits its host star to measure a dynamical mass. Since the separation between the two objects is small, this is feasible in the next few years. Stay tuned!