Observations of the Cosmic Microwave Background (CMB) have already revolutionized modern cosmology, providing evidence that the nature of our Universe can be beautifully described by six fundamental parameters. And yet, the authors of this work say that the CMB has even more insight to offer, this time into how gravity behaves on microscopic scales. It is believed that the gravitational force is transmitted by a hypothetical, fundamental particle called the graviton, similar to how the photon carries the electromagnetic force. Unfortunately, the gravitational force is much weaker than the electromagnetic force1, and while scientists can easily measure a single photon, the prospects of detecting a single quantum of gravity are much graver. However, the authors argue that precise measurements of the CMB can do just that, proving the existence of the graviton and the quantized nature of gravity. Such a detection would provide evidence for the unification of general relativity and quantum mechanics, one of the most profound problems in current theoretical physics.

The effect of a gravitational wave on a ring of particles, as space-time is compressed and stretched.

The prevailing description of the early universe involves a period of exponential expansion, known as inflation, beginning about 10-36 seconds after the Big Bang. During this expansion, which lasted just a tiny fraction of a second, the volume of the Universe increased by at least a factor of 1078, making microscopic density fluctuations astronomically large. This rapid expansion solves several problems with the standard cosmological picture, including the near-perfect uniformity of the CMB temperature and the Universe’s nearly flat spatial geometry. Astronomers have strong evidence for the occurrence of inflation; all relevant observations are consistent with the predictions of inflation, but they do not yet provide direct, conclusive evidence for inflation.

The “smoking gun” for inflation would  come from a measurement of the gravitational waves that are believed to be generated during the inflationary expansion. These waves are ripples in space-time and are a standard prediction of the theory of general relativity. They are believed to be composed of gravitons, just as electromagnetic waves are composed of photons. Gravitational waves are also produced during the merging of extremely massive objects (like black holes or neutron stars), and the prospects for measuring the waves from a merging event in the coming decade are promising. However, it is believed that such a gravitational wave detector would be unable to detect a single graviton, as the sensitivity required is well beyond practical limits. This is where the CMB comes in handy. 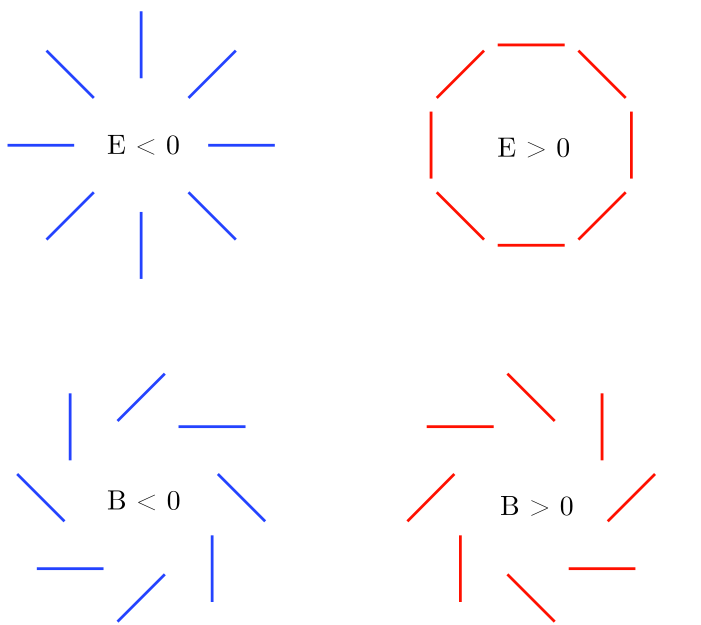 Inflationary gravitational waves leave a distinct imprint on the photons of the CMB by changing the polarization of the radiation. CMB light waves do not oscillate in a random direction (known as unpolarized), but rather with specific patterns, known as E-modes and B-modes (see the figure to the left). The E-mode pattern arises from the Thomson scattering between the CMB photons and electrons in the early universe, while B-modes can arise from two effects: either inflationary gravitational waves or the gravitational lensing of the CMB. Recently, the B-mode polarization of the CMB caused by lensing was detected for the first time (see this astrobite for a quick summary). Several experiments are currently hunting for the inflationary B-mode signal, and it is one of the most exciting experimental areas in astronomy today. Such a detection would not only provide the smoking gun for inflation but also for the quantization of gravity.

To be clear, the authors emphasize that their analysis presents no new results, but rather raises a key point that had been overlooked in previous discussions of inflation and gravitational waves. Their fundamental thesis is that because inflationary gravitational waves are inherently a quantum-mechanical phenomenon, any detection of these waves proves the quantization of gravity. Major efforts are underway to measure these waves, but the predicted amplitude of the signal is relatively uncertain and could be below current experimental sensitivity limits. Nevertheless, astronomers are optimistic that a detection will come in time, proving the existence of inflation, and as a bonus, the quantization of gravity.