Stuck in neutral: how did the Universe become reionized?

Often, the most profound questions in physics are those you wouldn’t think to ask.  A perfect example is that leading to the discovery of the Higgs boson: why do particles have mass?  Today’s paper is on a question in this category in astronomy: why is the Universe ionized and not neutral?  After all, the background temperature today, 2.73 K, is far lower than the ~10,000 K needed to ionize hydrogen.  Well, what keeps us, and the Universe, warm?  Stars.  In particular, the Universe became ionized (for the 2nd time) because of starlight heating up the neutral hydrogen and popping electrons off their nuclei.

When this occurred, and how quickly, is a tremendous open question in astrophysics.  If you know the answer, please write us and we will be glad to co-author the paper and share your Nobel prize.  Nonetheless, we do have some constraints, which Robertson et al, assemble. They particularly focus on what new things we learned from the latest Ultra-Deep-Field Hubble Space Telescope observations, which go to z~8 and limiting magnitude -17.  Redshift z is a proxy for distance, while magnitude is a proxy for how faint the minimally detecting objects are. Ultra-Deep-Field just means it goes to high-z (very deep out into space). 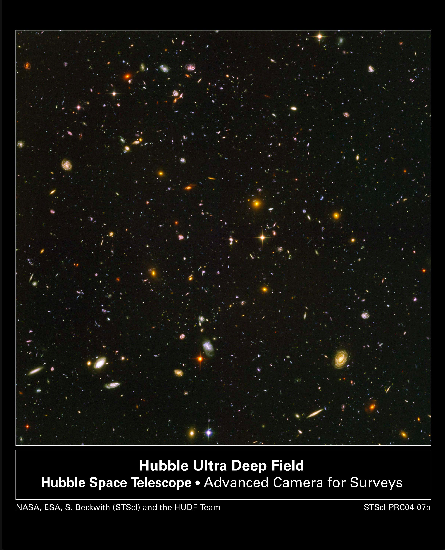 Image of Hubble Ultra-Deep-Field—deep because it goes out super-far into the past, to redshift 8 (and remember, farther into the past is also farther away!) From http://atomictoasters.com/2011/08/the-hubble-ultra-deep-field-2/ 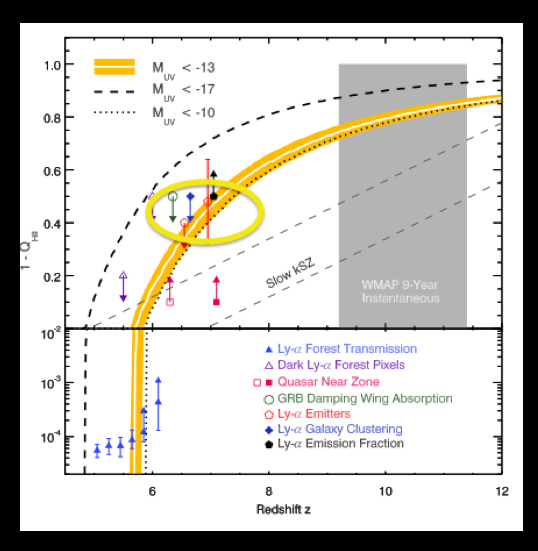 Constraints on reionization. Horizontal axis is a proxy for time while vertical axis is fraction of ionized hydrogen (1-neutral hydrogen fraction). The yellow oval highlights the pentagons, which are constraints from the Lyman alpha absorption. The straight dashed lines are constraints from the kSZ effect: this effect only gives a constraint on the total time for reionization, so the start and endpoint of the lines are arbitrary and just chosen by the authors. From the Robertson paper.

Robertson et al. also include a few other constraints omitted for brevity here. Overall they conclude that the galaxy population measured in the Hubble UDF program is not enough to reionize the Universe by the time we know it is (z~6) and simultaneously get the right Thomson optical depth (see 2) above).  So they do the simplest thing they know how to: extrapolate from the known properties of galaxies in the sample and assume that galaxies continue to exist with the same properties out to z~12-15 and limiting magnitude -13.  In other words, that there are more galaxies out there, basically the same as those we see, but too far away and too faint to show up in Hubble’s UDF. 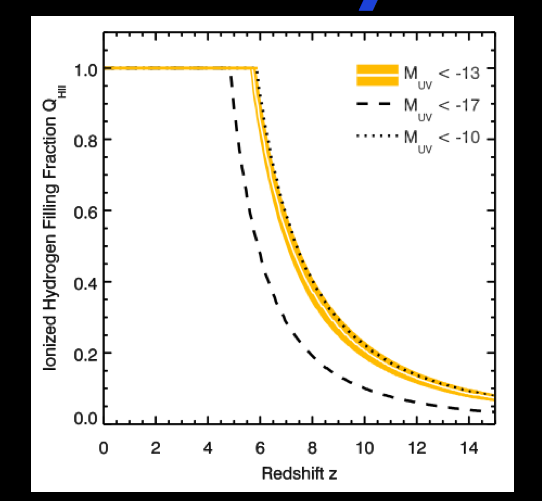 Ionized hydrogen in the Universe versus redshift (a proxy for time—farther back into past is farther to right on plot.) The black dashed curve is the real results, the mustard curve those with extrapolation fainter and farther as explained in text. The dashed line is too low to satisfy all the constrains in Figure 2, but the mustard line just makes it.  From the Robertson paper.

Reionization is an incredibly complex area of research that is only just being attacked with both observations and numerical simulations, so we should expect many more exciting constraints in the near future. After all, how many papers do you read a day that have a plot showing the history of the element hydrogen over the last 10 billion years?