The biggest mysteries about the origin of life – whether on Earth or distant exoplanets – aren’t limited to the actual origin, the line crossed to alive from not. There’s a whole host of chemical steps leading up to that transition that are, frustratingly, equally mysterious. Life uses chemistry to reproduce, pass on information, and drive chemical reactions, but it takes many complex and seemingly unlikely steps to get to systems complex enough to do so. “Prebiotic” compounds are the building blocks of the buildings blocks of life – amino acids and other organic components that seem to need to exist before life can arise. It’s possible that once life – or its components – arises on one planet or moon, it can seed a solar system. But the path from simple molecules to the building blocks of life is shrouded in mystery.

The problem is the considerable energy – or special conditions – required to catalyze the reactions to form these molecules. The small, simple molecules that populate the galaxy – and exoplanet environments – are relatively stable; without a dramatic input of energy, they won’t form new bonds. Previous studies have looked at lightning strikes and volcanic eruptions; the authors of this paper have set their sights higher. Literally higher, above the horizon, to consider the synthesis of organic molecules in exoplanets’ (dusty) skies. 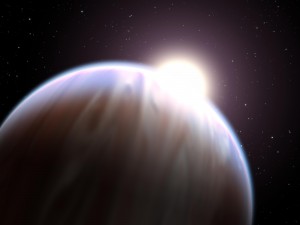 An artist’s conception of star-rise over a cloudy exoplanet. Credit: NASA JPL

Dust is everywhere. It’s in the interstellar medium, it’s in protoplanetary disks, and it’s in atmospheres, too. Looking at the atmospheres of sub-stellar objects – exoplanets and other bodies not massive enough to sustain fusion, like brown dwarfs – the authors propose that the electrostatic interactions of dust particles with plasma could provide the energy necessary to surmount the catalytic thresholds necessary for the formation of prebiotic compounds.

The authors cite X-ray and radio emissions from the atmospheres of substellar objects as evidence of plasma in exoplanets’ atmospheres, and they also discuss several processes through which ionized gas can become a plasma, supporting ionization from the theoretical angle as well. Then, once the dusty atmosphere has become sufficiently ionized, the dust grains become negatively charged – since electrons are lighter and faster than positive ions, they collide with dust particles more frequently – and the area around them becomes a positively charged “plasma sheath.” Plasma ions are then attracted to and accelerated toward the dust particle, imparting more energy that they would have in a neutral environment. The question, then, is if that is enough energy to make otherwise impossible chemical reactions happen.

To test this out, the authors used an atmosphere model called DRIFT-PHOENIX and a chemical makeup that includes multi-species plasmas including Fe, H2, NH3, CH4, CO, H2O, and other simple compounds. The model allowed them to evaluate plasma-dust interactions in different regions of the atmosphere, determining if temperature and ionization allowed energetic enough reactions, more than kinetic energy alone ever could.

They focused on the formation of glycene, the simplest amino acid, and thus a reasonable place to start. Using a sequence of reactions that use formaldehyde, ammonia, and hydrogen cyanide as components and stepping stones, the authors found that at “modest” plasma electron temperatures (104 K), which without ionization is not energetic enough to support these processes, the activation energy was made attainable by the addition of electrostatic interactions. They propose that, although in some cases the ionic flux on the dust grain surface may heat the grain to evaporation, higher temperatures may also enable even more elusive reactions.

The mystery of life’s origin on Earth will probably never be definitively solved. We know it arose; without a time machine to take us back 4.5 billion years, we’ll probably never know how. And the question of life elsewhere can’t be answered with speculation. But in this paper, the authors have demonstrated a viable pathway for the formation of prebiotic chemistry in feasibly common conditions. The mystery gets a little less murky, one feasible chemical reaction at a time.