You might have seen the press releases lately: “Every red dwarf star has at least one planet.” That’s quite a bold claim. But wait a second! This idea might sound a little familiar to you. Perhaps you remember this headline from two years ago. A planet for every star, with 100 billion stars in our galaxy, means 100 billion planets. And that number may ring a bell, if you happen to remember this news story from January, 2013, or this one from April, 2013.

With the premiere of the Cosmos reboot Sunday night, it seems an appropriate time to remember Carl Sagan’s lesson that we should always approach new results with a certain about of scientific skepticism. In an era of “clickbait” and pageview-based advertising revenue, it’s important to remain skeptical about press releases as well. Don’t get me wrong, I think Tuomi et al. wrote a very interesting paper, and yes, I think their science is sound. However, from reading the press releases one might think that the main point from the paper was a measurement of the planet occurrence rate. If that truly was the only result of the paper, well, they’re two years late to that party. In fact, that title is already taken! One planet per star is a sexy-sounding result that surely drives traffic to various news sites with this headline, but it’s old news. That number is simply not what’s most exciting about this paper!

Let’s look at what is exciting here. The four press releases I referred to above, while all appearing nearly identical, refer to papers that are fundamentally different. All do estimate planet occurrence rates. Most of the attention is focused on M dwarfs, since 70% of all stars in the galaxies are these diminutive objects, but all results rely on different techniques. One, which we’ve discussed before, looks at planetary microlensing data, while another studies results from the Kepler Space Telescope.

The authors of last week’s planet-per-star paper, meanwhile, use radial velocity data from HARPS (La Silla, Chile) and UVES (Paranal, Chile), two surveys run by the European Southern Observatory. The authors of this paper analyze the data collected by these instruments on 41 nearby M dwarfs. In this data, they find evidence for 10 planets around 8 stars. That’s a pretty good haul of new planets, but if you’re going to estimate a total occurrence rate, you must know both how many planets you detected and how many you missed.

The authors estimate how many planets they missed by going back through their data set and, over a grid of hypothetical planet masses and orbital periods, determining what fraction of stars were observed at just the correct times and with the correct sensitivities to pull these hypothetical planet signals out of the stellar noise. Thus, for each detected planet, the authors can determine the likelihood it would be detected if it were in a randomly-oriented orbit around a random star in their sample. They can then use these numbers to “correct” their sample to the intrinsic planet population: if they detected a planet that they determine they have a 25% chance of detecting, then there are likely 3 other planets just like it hidden in their data (see Figure below). By repeating this for each of the 41 stars in their collection, and determining the likelihood of detecting each planet they discover in their sample, they find that, to find the 10 planets they do find, the most likely occurrence rate is 1.36 planets per M dwarf star. 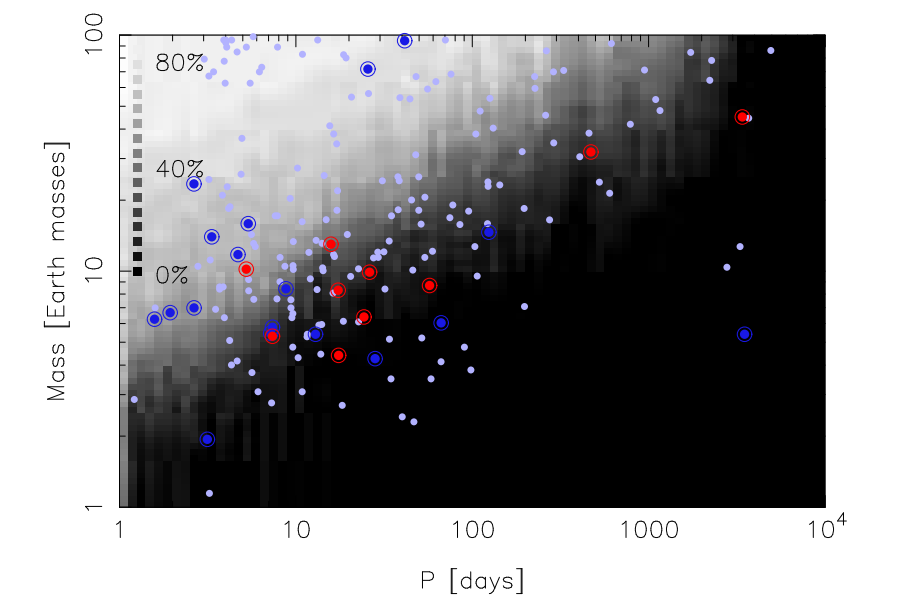 It astounds me that in 20 years we’ve gone from knowing of zero extrasolar planets to determining that planets are at least as common as stars. But what astounds me even more, and what is buried in the myriad of repetitive press releases, is that we’ve measured the occurrence rate of extrasolar planets three times now, with three different methods, and they all give exactly the same answer! By reading the different press releases, a reader might get the impression that each of these groups are toiling away in relative isolation, and are the first groups to consider planet occurrence. That impression couldn’t be farther from the truth; each paper stands on the shoulders of the previous papers, providing incremental progress. The 2012 result combined microlensing results published previously into an occurrence rate, while the 2013 papers looked at the same problem with a different tool (Kepler), and found the same answer! Now, this group uses another different tool (radial velocities), and confirms the result again! That’s a scientific method I can believe in, and one the major media outlets are remiss in not mentioning.