The number of confirmed planets existing outside our Solar System just doubled.

The new planets were announced in Rowe’s paper and were confirmed using a technique outlined in Lissauer’s accompanying paper. This new result raises the number of confirmed exoplanets from 942 to 1710.

Since the first exoplanet discovery in the 1990s (or 80’s, depending on who you talk to), planet hunters continue to find more and more: the current number of planet candidates stands at around 4000. That’s mostly thanks to the Kepler spacecraft – a (literal) planet finding machine which detects planets via the transit method. I say ‘candidates’ because we can’t know for certain that all of these objects are planets. Some of them could be false positives – stars masquerading as planets, for example. 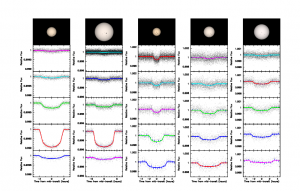 Transits of all planets in the newly confirmed 5-planet systems. The axes are flux vs time. Time and depth scales are consistent within each system, but differ from system to system.

Traditionally an object could only be confirmed as a planet if its mass, measured via the radial velocity (RV) or the transit timing variation (TTV) technique, was around 13 times the mass of Jupiter or less. Unfortunately, the RV method requires high signal-to-noise spectroscopic observations and can only be applied to relatively bright stars with relatively massive planets. The majority of the stars in the Kepler field of view are too faint to do RV follow-up. The TTV method can only be applied to a subset of multiple planet systems in favourable, dynamically interacting configurations. For many of those 4000 planet candidates, confirmation looked like a pipe-dream… until now.

The authors of these papers take a different approach to planet confirmation – they show that making things that look like multiple planet systems with some kind of finely-tuned false positive scenario is extremely difficult.

A ‘false-positive’ (FP) in the context of planet confirmation is where a transit signal is mimicked by a star, or combination of stars.  For example, If one of the objects in the system was not a planet but rather a small star the size of a large planet, it could reproduce a planet transit exactly. Because Kepler pixels are large, multiple stars can fall on individual pixels. A background eclipsing binary, or star with a giant planet, lying in the same aperture as the target star can produce a convincing FP. The flux variations observed by Kepler will be some combination of flux variations from the target star, and the background (or foreground) contaminating star(s). Contaminating eclipsing binaries can be very convincing planet-transit mimics. 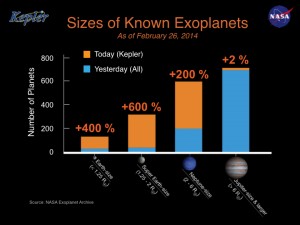 This paper exploits the fact that we see multiple planet systems in the Kepler data; many stars have more than one planet. In fact, more than 40% of the Kepler planet candidates are in multiple systems.

The first FP scenario given above can be ruled out since these multiple systems would be dynamically unstable if one or more of their members were a star. So the only feasible cause of a FP is a background eclipsing binary, or star with a giant planet, falling on the same pixel as the target star.

During their analysis the authors make two assumptions: 1) FPs are randomly distributed amongst Kepler targets and 2) the fact that a star hosts detectable planets has no bearing on how likely it is to display FPs. This second assumption means that they can treat the probability of a star hosting both a planet and a FP as the product of the individual probabilities of those two scenarios.

Lissauer et al exploit the following logic: if you detect a planet, there is some probability (about 0.1) that it is a FP. If you detect two planets, you could either have two planets (the likeliest explanation), a planet and a FP (much less likely) or two FPs (very unlikely). Note that no Kepler stars have yet been found to host more than two FPs. Extending the logic to 3+ transiting systems allows them to confirm the multiple planet candidates to > 99% confidence. 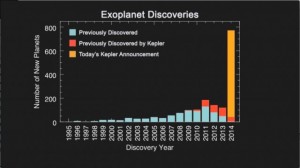 This figure shows the number of newly discovered exoplanets announced each year since the 1990s. Image credit: NASA

When the field of exoplanets was young, each new planet discovery was thrilling. As the number of confirmed exoplanets has increased, individual discoveries have become less sensational. Now it seems you have to discover hundreds of new planets at once to cause a splash. That’s not to say that discovery is no longer important, however. The more planets we add to our sample the more easily we can study populations and the closer we get to finding an Earth-like planet.