BICEP2 I: DETECTION OF B-mode POLARIZATION AT DEGREE ANGULAR SCALES

It’s not every day that you go into work and hear how the Universe began.  Today I was in the audience as the BICEP2 team presented observations of gravitational waves coming to us from the first

seconds of the Universe’s history.   In the time it took the text of this sentence to go from your eye to your brain, more than a billion billion billion intervals this long have elapsed.  To say this signal is from the first blinks of the nascent cosmos is to vastly understate how primordial it is. (Note: a few seats away from me in the audience was friend and fellow grad student Kirit Karkare, a former astrobiter who is one of the authors of the paper—read a series about his time working on BICEP2 at the South Pole here through here!)

BICEP2 observed a pattern imprinted on the cosmic microwave background (CMB) due to the passage of gravitational waves most likely produced by inflation (see this astrobite for more, and this one). Gravitational waves are propagating ripples in the fabric of space-time itself, and the best way to imagine them is to consider a cross of four spherical masses, initially symmetrically placed away from a common center.  A gravitational wave passing through them would cause them to move in and out from this center, distorting the cross.

As the waves passed through the early Universe, they set charged particles in motion, just like these spheres of mass. The periodic, regular motion of these particles imprints a characteristic pattern on the light of the CMB by polarizing it: making the electromagnetic waves (i.e. light) oscillate in particular directions.  If you could see the CMB to high, high precision, this pattern would look like tiny vortexes of hot and cold, much like a weather map of wind circulation.  But it’s not a wind: rather, these vortices are due to electromagnetic waves oscillating in different directions on the sky.  These directions are known as polarizations, and inflation’s signature is to polarize the CMB. 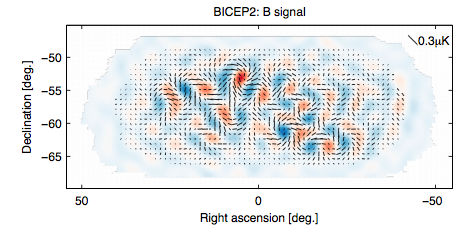 1.  This shows the tensor modes in one particular patch of sky, also called B modes because they are like a magnetic field (which has curl only). Note the swirling of the vectors, like little vortics. It is particularly impressive that one can see this signal directly without needing to add up many regions of the sky, as an experiment like Planck will do. BICEP2 paper.

Inflation was first proposed in the early 1980s by Alan Guth, Andrei Linde, Alexei Starobinsky, Andreas Albrecht, and Paul Steinhardt, among others. Guth’s paper couched inflation as a response to two problems.  First, the Universe must have been highly homogeneous at the beginning, since it is still relatively so now, but different regions of it could not have been in the causal contact necessary for this level of homogeneity.  Second, the expansion rate at the beginning must have had a very particular, perhaps unlikely value (out to 59 decimal places!) for the Universe to be geometrically flat today.  Inflation resolved both of these problems. If you expand a tiny, causally connected (and hence relatively homogeneous) initial region exponentially fast, it can become the whole Universe we see today.  And more, take a small enough patch on any curved surface (like the Earth), blow it up, and it will seem flat.

Since 1980, inflation has fit in well with many subsequent observations, such as the result that the CMB is uniform on scales that could not have been in causal contact without some new mechanism (first observed by the COBE satellite in 1991).  However, there has been no smoking gun: an observation of a unique prediction of inflation. The tensor mode imprint now observed is a relatively unique prediction of inflation that is unlikely to come from any other scenario for the Universe’s beginning. 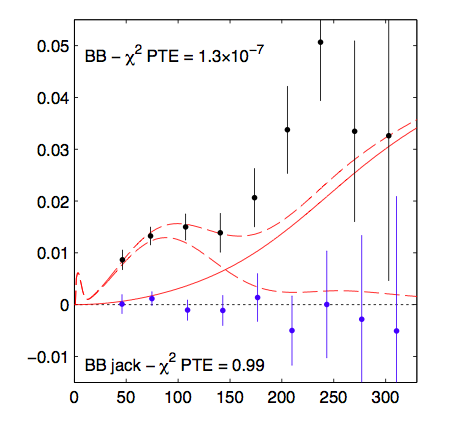 2.  The key plot. The vertical axis measures the strength of the signal while the horizontal is the multipole moment l, which describes the physical length scale on which the maps of the polarization are correlated with themselves (higher l means smaller scales, and a typical scale is ~a degree on the sky).  The black points are BICEP2 data. The solid red curve is the polarization expected from lensing of the CMB by intervening mass on the light’s path to us. The red dashed curves are an r = 0.2 model (lower) and r = 0.2 plus lensing of the CMB (upper) (i.e. adding the dashed and solid red curves). The number $1.3 \times 10^{-7}$ is the Probability To Exceed by chance: how likely is it to get these results by chance, as a statistical fluke, if the real Universe does not have inflationary tensor modes? BICEP2 paper.

The tensor-to-scalar ratio is the ratio of gravitational waves to density fluctuations in the Universe.  Confusingly, the gravitational waves are also called tensor modes because they have directions as well as magnitudes*, while the density fluctuations are also called scalar perturbations because they are just numbers (scalars). That’s why r is the tensor-to-scalar ratio.  BICEP2’s major result is a 5.3 sigma detection of tensor modes. The best fit model is one with r=0.2, and fitting this model permits the team to rule out r=0 at 7 sigma. See the Figure above, from the paper, which clearly shows that an r = 0.2 model (the two dashed red curves) fits the data well.

Inflation takes many forms, but the most plain vanilla version is to have a  field or fields (just some amount of energy at every point in space), which might describe particles, losing potential energy and driving exponential expansion.  A good analogy is a ball rolling down a hill: as the ball rolls down, it loses height but gains speed.  To generate exponential expansion, the ball has to be rolling on a very shallow hill. Otherwise, it would end up at the bottom too quickly and the Universe would fail to inflate enough to solve the problems inflation was proposed to address.  Inflationary models where the ball is rolling down a shallow hill are called “slow-roll” inflation.

In slow roll inflation, r has a simple physical interpretation: it measures the slope of the hill the ball is rolling down.** The hill is shallow, so the slope is small.  That’s why r was expected to be small, and consequently hard to detect.

And it was.  The BICEP2 team’s telescope, about 30 cm across, stared at the same patch of sky for approximately 3 years, more or less continuously, to get the noise down sufficiently.  They also sliced their data in many different ways to try to eliminate any other sources for the signal.  In particular, they divided the data into smaller sub-samples and subtracted them from each other in a strategy called “jackknifing”.  If the signal was roughly the same in all sub-samples, these subtractions should result in random noise.  And they did, compared across stretches of time, across different detectors (the telescope has 512 separate ones), and many other categories. 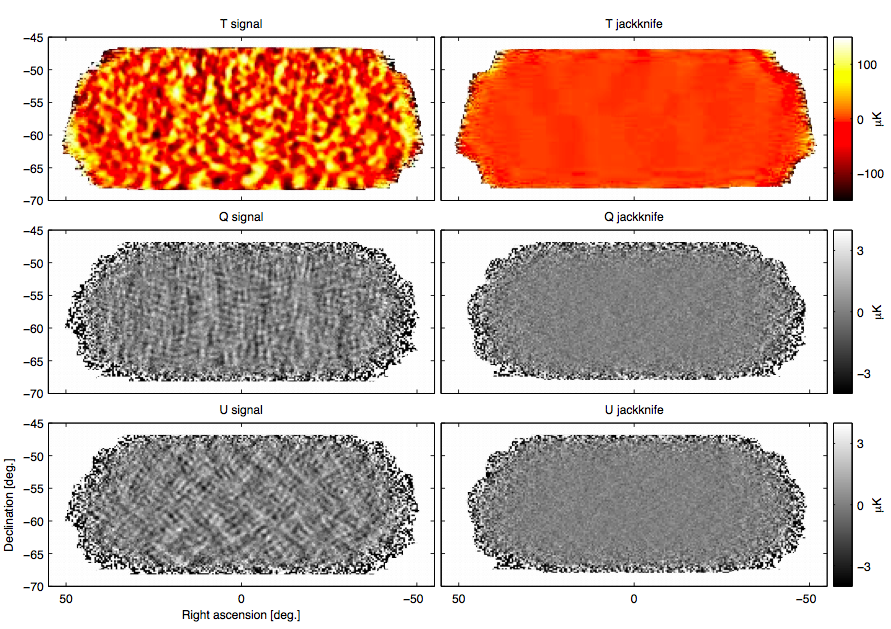 3.  The left hand column is the temperature map and then, moving down, two different directions of polarization, called Q and U. The units are all in microKelvin.  The jackknifing here has been to subtract the maps from one temporal half of the observation cycle from the other. As should be the case if there are no systematic errors, the jackknifed results look like noise. (Technical point: Light has two polarizations, so Q and U completely describe it). BICEP2 paper.

The team also estimated whether contamination from other astrophysics could create tensor modes, such as dust in our own galaxy, which can conceivably mimic a signal.  Using the latest publicly-available data from the Planck mission, the team found dust cannot come close to explaining the signal.  Another possible contaminant is lensing of light coming from the CMB to us by galaxies in between (detected by South Pole Telescope in 2013 and by Polarbear in 2014; see also this astrobite and this one for more discussion).  Light experiences gravity, and mass can therefore bend it so as to create a tensor-mode like signal.  But this signal is not large enough to be confused with the BICEP2 detection, and moreover has a quite different shape from the inflationary tensor modes. Lensing tensor modes are dominant at higher multipoles than those from inflation, and in fact BICEP2 detects these lensing modes separately at 2.7 sigma. (They are in solid red in 2. above). 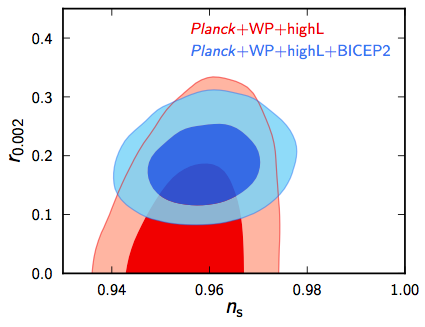 A surprising aspect of the result is that the value of r BICEP2 found is actually above current constraints from other experiments.  The Planck mission found that r < 0.11 at 95% confidence, about two BICEP2 error bars below the BICEP2 result.  More certainly remains to be done to understand this tension, but the BICEP2 team notes that one possibility for resolving this tension is if running of the scalar spectral tilt is allowed. The scalar spectral tilt measures whether there was a preferred lengthscale at which structures correlated with each other at the beginning of the Universe.  Inflation predicts some correlation, which has been observed (e.g. by WMAP). Running of the scalar spectral tilt incorporates a dependence of the slope on physical scale: it says that the Universe’s density perturbations are correlated, but different physical scales are more or less strongly correlated.  The BICEP results in combination with the Planck results suggest that this may be so, but there are many other possibilities for new physics that could also be responsible.

What’s certain is that these results open a new era of precision early Universe cosmology.  Humans have been telling themselves stories about their origins at least since Hesiod’s Theogony in the 8th century BC.  Hesiod began that work with  a hopeful question: “These things declare to me from the beginning, ye Muses who dwell in the house of Olympus, and tell me which of them first came to be.”  Stretching back through the unfathomable vastness of cosmic time and distant space, the BICEP2 results bring us nearer a final answer.

*Note I am not being fully detailed here: there is actually a matrix (really, a tensor, but just think “table of numbers, with two rows and two columns” that describes the stretching and squeezing of space-time itself, that is the tensor perturbation.  This is an important subtlety since vectors also have magnitudes and directions, but we are not interested here in vector perturbations! Hartle’s “Gravity: An Introduction to Einstein’s General Relativity”, chapter 23, provides a first-timer-suitable discussion of this.

**More precisely, the initial value of the logarithmic derivative of the potential,

, scales as the square root of r; see a superb review by Lesgourgues (2006), equations (61) and (148), with notation defined above equation (143). Note Lesgourgues is taking the Hubble parameter and the velocity of the field

to be constant in this calculation.