There is a famous line by 18th century wit Alexander Pope: “Nature and nature’s laws lay hid in night/God said, Let Newton be! and all was light.”  Yet 300 years on, that’s far from true. 24% or so of our Universe lies hid in night, in a mysterious component known as dark matter. Thus far, dark matter seems to interact with itself and with other particles through gravity alone.  If this continues to be so, we now know about all we’ll ever know about dark matter.  On the other hand, if it is discovered that dark matter interacts through other forces, such as strong, weak, or electromagnetic, we may thereby find new insight into its essence.

Therefore, there has been great interest in addressing this question, and the paper I discuss today uses cosmology to do so.  It begins with a simple assumption: dark matter scatters regular matter (also known as baryons) when it hits it with some speed.  In these scatterings, the dark matter can lose or acquire momentum, so its spatial distribution is eventually modified by scatterings.  This in turn changes how structure forms in the Universe, which impacts many observables we see today, such as the Cosmic Microwave Background (CMB) and the Lyman-alpha forest (dense clouds of cool, neutral hydrogen gas that we can trace by the light they absorb in a “forest” of absorption lines).

There are three important new aspects to the Dvorkin, Blum, and Kamionkowski work.  First, their analysis doesn’t need to make assumptions about how the dark matter and baryons scatter each other.  The dark matter could scatter baryons because it has a tiny electric charge; it could scatter them for some other reason.  Dvorkin, Blum, and Kamionkowski simply parametrize the scattering rate as some power of the collision velocity; different mechanisms correspond to different powers, and leaving the power unspecified allows them to treat a variety of mechanisms.

Second, there is a conceptual advance in the paper.  The authors work out from first principles how the dark matter scatterings can be incorporated into linear perturbation theory.  This latter is a framework for describing the growth of small deviations from uniformity in the early Universe, before the first stars had formed.  At these early times, regions with a bit of extra matter agglomerated more via gravity, seeding stars and galaxies today.  Scattering of baryons and dark matter, were it present, would change this process, and incorporating it into linear perturbation theory is an elegant way to predict how.

In detail, the story is slightly more complex.  There are two velocities at play: one is the average thermal velocity (in random directions) the dark matter particles have because they have some temperature, and temperature is just random motion of particles.  The second is the coherent velocity between the baryons, taken as a whole, and the dark matter, taken as a whole, which changes if the baryons and dark matter scatter each other.  As long as this second is much smaller than the first, it is straightforward to apply linear perturbation theory, and previous work had done this.  But when the Universe cools enough that the dark matter is moving in bulk comparably to its random (thermal) motions, then it is not straightforward.  Dvorkin, Blum, and Kamionkowski approximately incorporate this too into linear perturbation theory by adjusting their model of how scatterings change the particle velocities.

Now, at early times in the Universe, this adjustment is unneeded: the Universe is so hot that thermal motions beat coherent ones.  These early times set up large-scale structure, such as the Lyman-alpha forest. Hence, all that is needed to accurately predict the effects of scattering on large scale structure is straightforward linear perturbation theory. 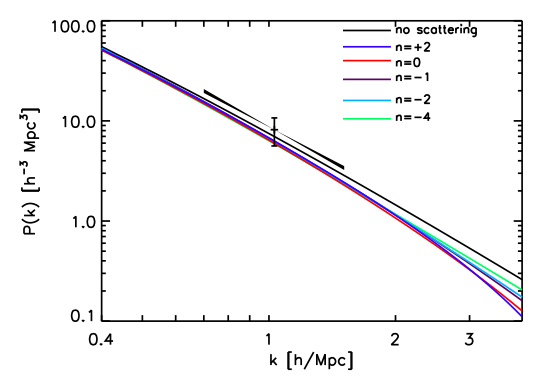 The colored curves describe different velocity dependences of the scattering strength; it is scaling as v to the nth power. The horizontal axis, k, is a measure of how separated two points in space might be; larger k corresponds to smaller physical separation. The vertical axis (technically known as a “power spectrum”) describes how correlated two points separated by a scale 1/k are; higher number mean more correlation. The one point with error bars shows that most of the models the authors consider are not very favored by the data. The black dots around the error-barred point show the slope of the power spectrum the data allows; it also is not very compatible with the models considered. Note this data is taken from correlating clouds of neutral gas we infer by the light they absorb; as described above as well.  These clouds, also known as the Lyman-alpha forest, are considered large-scale structure (in contrast to the CMB).

However, the CMB is sensitive to smaller scales that develop at later times, requiring the adjustment Dvorkin, Blum, and Kamionkowski have developed. 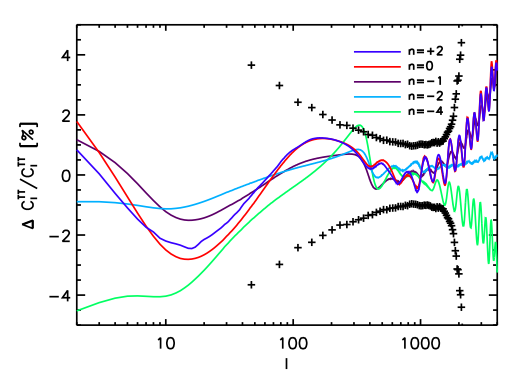 The colored curves are again models with different dependence of the scattering on velocity; scattering strength scales with velocity to the nth power. Here, the horizontal axis is again describing spatial scales, and similar to k, the larger l, the smaller the scale. The vertical axis again describes correlations, but here it is tracing the difference between those predicted by models the authors consider and the best-fit, non-scattering case. The important point is that any scattering would cause differences from the standard, no scattering model of dark matter at a few percent level in the CMB—meaning we would probably have noticed them. Note that the CMB is sensitive to evolution on smaller scales, and hence at later times, than the Lyman-alpha forest, so, as described below, it is where the authors’ advances are particularly important.

Overall, the authors place stringent new upper limits on how strongly baryons and dark matter can scatter: a typical baryon in our galaxy will not have been scattered by a single dark matter particle in the lifetime of the galaxy. Some of the specific models of the interaction they consider have constraints improved by a factor of 100 or so due to their analysis; some constraints improve by a factor of 2, and some constraints are entirely new.  In particular, if the scattering does not depend on the velocity between the dark matter and baryons, the bound in this work is a factor of 100 improvement.  If the scattering is due to very slightly electrically charged dark matter, the bound in the work is a factor of 2 improvement over previous work.  There is also a factor of 2 improvement on the electric dipole moment of the dark matter, and an entirely new bound on the magnetic dipole moment.

To my mind, the more important takeaway than specific numerical improvements on bounds is that this work offers a simple, fairly model independent way to use any cosmological observable generated by the growth of structure (and characterizable using perturbation theory) to constrain dark matter-baryon interactions.  As more and more precision and volume becomes available with upcoming cosmological surveys, this will be a useful complement to direct detection experiments and searches for astrophysical dark matter annihilation.

A classic paper: how did the largest scale structure in the Universe form?