The Pleiades is one of multiple nearby open clusters of stars that can be seen with the naked eye from most places on Earth. The Pleiades have a long and rich history with mythology, marketing, and pop songs. For such a famous, bright cluster, you would think astronomers know how far away it is, yes?

Determining distances in astronomy is difficult. For other nearby planets such as Venus or Mars, astronomers can use radar to determine their distance. For relatively nearby stars, astronomers can measure parallaxes. Parallax is the apparent motion of other stars as the Earth orbits the Sun, changing our viewpoint. Variable stars such as RR Lyrae and Cepheids can be used for even the nearest galaxies. At the furthest distances, Type 1a supernovae are the only clue astronomers have to determine distance. Astronomers are still working on other options for determining distances. A few more are detailed in Figure 1.

The Pleiades is close enough that parallaxes can be measured for the individual stars in the cluster. Most studies have placed the Pleiades just over 130 parsecs (pc) from us. However, the Hipparcos satellite, which measured parallaxes for over 118,000 stars gave a distance around 120 pc. Many of these results have sufficiently small error bars that these two distances are discrepant, as can be seen in Figure 1. Since those results came out in the mid 1990’s, there has been much debate in the astronomical community over the actual distance to the Pleiades. If the Hipparcos result is incorrect there would be concern over the other parallaxes it measured. If Hipparcos is correct there would be much consternation over what caused all the other results to be so wrong. This paper presents new results indicating the Pleiades is indeed just over 130 pc away.

The authors used the Very Long Baseline Interferometer to measure the parallax of four different star systems in the Pleiades, each containing a few stars. An Active Galactic Nucleus (AGN) happened to lie close enough that it could serve as a reference point. This AGN is so far away that is has no observable parallax, allowing the authors to use it to determine how far the stars appeared to move over the course of 1.5 years. 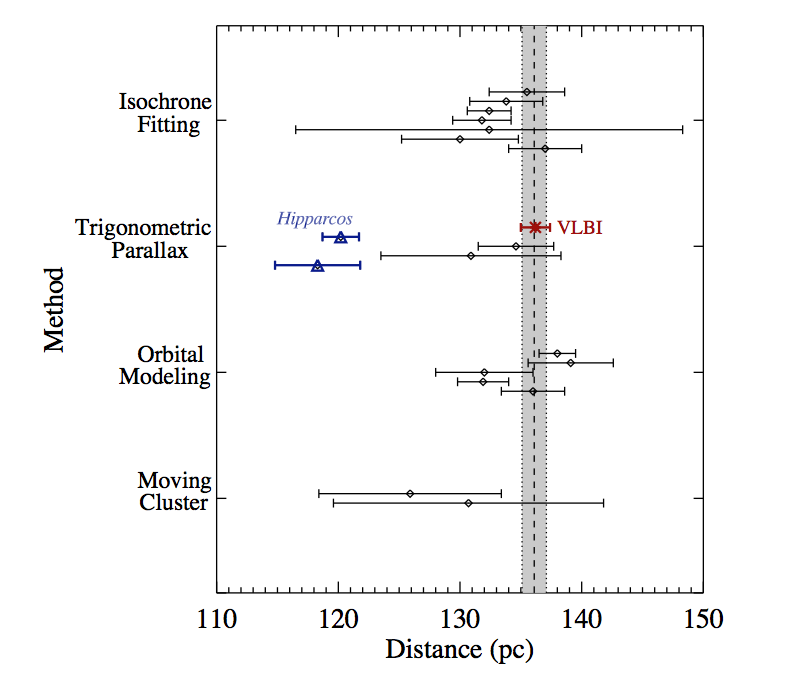 Figure 1: Distance to the Pleiades as measured in many different methods. The new result presented in this paper is in red labelled VLBI. The Hipparcos results are labelled in blue. Isochrone fitting matches the observed colors of many stars to that predicted by modeling the evolution of stars born at the same time. Trigonometric parallax is the apparent movement of stars as the Earth revolves around the Sun. Orbital modelling compares the effective temperature and surface brightness of two main sequence stars that orbit each other in the cluster. The moving cluster method relies of measurements of the proper motion and radial velocity of many stars in the cluster.

The authors determined the Pleiades cluster distance to be 136.2 +/- 1.2 pc. As can be seen in Figure 1, this results aligns with many of the previous results, with the primary obvious outlier the Hipparcos data. This result is especially comforting to those astronomers who model stars. As Figure 1 explains, many of the previous distance measurements have heavily relied upon stellar models. If these models were incorrect, leading to incorrect distances, it would have large ramifications in all areas of astronomy.

Hipparcos is still the most precise astrometric mission to date. The recently launched Gaia mission will surpass the precision of Hipparcos. Gaia operates in a very similar mode to Hipparcos, but will survey nearly one billion objects during its five year mission. But these results do urge some caution with regards the Hipparcos data. It is not immediately clear why Hipparcos came up with a much closer distance to the Pleiades than other approaches, though the data analysis is the first suspicion. This is most concerning when it comes to discussing Gaia. If there is an error with Hipparcos, the same error could manifest itself in the Gaia results. Many teams are now working to resolve this controversy, especially since Gaia has just recently started taking data. There will certainly be more to come on this issue.