When it comes to questions of extraterrestrial life, we spend a lot of time here (and in astronomy/astrobiology in general) concerned about planets’ habitability. The exoplanet boom feeds this curiosity—we’ve got a glut of data, so we’re asking questions in that realm. How many Earth-like planets might be out there? What does “Earth-like” really mean? Are other kinds of planets habitable, too? And on and on. All of these questions seem to rest on an assumption, or the excitement behind them does: that abundant habitability does (or could) necessarily mean abundant life, too.

But many factors determine the abundance or lack of life in the universe, especially intelligent, technologically adept life we could communicate with, or at least notice. The Drake Equation reminds us of this, seeming to cover all the bases: star, planet, habitability, origin of life, intelligent life, technological life, and civilization’s longevity. But even still, there’s more. That gap between origin of life and origin of intelligence is a big one. Space is a dangerous place for a little planet, and lots of things can happen to cripple or eradicate its fledgling life. On Earth alone we’ve had five major extinction events, wherein up to 96% of species were wiped out. Some argue that, thanks to humanity, we’re currently in the midst of our sixth. Asteroids and volcanoes are familiar harbingers of global doom. But what about Gamma Ray Bursts? Is another doomsday lurking? 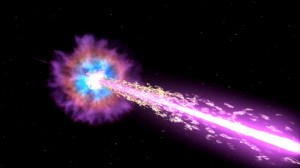 Artist’s image of a gamma ray burst. And it’s coming straight for you. (NASA/Swift/Cruz deWilde)

The idea that Gamma Ray Bursts (GRBs) could sterilize a planet isn’t new. These very high-energy blasts of radiation and particles are the brightest explosions known in the universe. We don’t know exactly what they are—their varying lengths suggest they may have a range of origins, perhaps the deaths of massive stars and the merging of binary neutron stars. But we do know that their main threat to life on Earth would be the potential ruin of the Ozone layer. Without the Ozone layer, UVB rays would reach Earth’s surface unfiltered, killing land-dwellers and life in the top layer of the oceans. This would include plankton, which is the base of pretty much the entire ocean food chain. You don’t want bad things for plankton.

The causes of some of Earth’s past extinction events are mysterious, and scientists have been wondering for decades if GRBs could be the culprits. We’d also like to know, if I can speak for all of Earth, if GRBs pose a threat to life here in the future at all. The authors of today’s paper use new findings about the rate of GRBs to estimate the probability of a GRB hitting Earth. They also expand their findings out to the rest of the galaxy and the universe. We’re used to thinking of the habitable zone as an orbital area around a star, but there are also zones of the galaxy (and universe) that are more habitable than others.

The authors look at three types of GRBs, but it’s really just long GRBs (LGRBs) that could pose a threat. The others are more frequent, but they’re just not strong enough to do serious damage.

But LGRBs. These GRBs could be trouble. In order to calculate just how much trouble (probabilistically), the authors estimate the fluence (flux integrated over time) of GRB radiation that it would take to seriously harm or wipe out all life on Earth. They then use the density of stars in the galaxy (assuming GRBs are randomly distributed) to see how likely we are to be hit by a GRB in a given timeframe.

Before we get to being pelted with GRBs, we’ve got a lucky constraint on their frequency. LGRBs are associated with the deaths of massive stars, and previous research has shown that they tend to come from dwarf galaxies with low metal content. (Be glad you don’t live in one of those!) This suggests that the threat of LGRBs from within the Milky Way would mainly be from stars with similarly low metallicity. The authors compare the metallicity of LGRB-hosting galaxies with the metallicity of Milky Way stars, and find that only about 10% of Milky Way stars are in the right range for generating LGRBs.

Taking metallicity into account, it seems that Earth’s likelihood of being hit by a life-threatening LGRB in any half-billion years is about 50%. Within five billion years that goes up to 90%. Life has been on Earth for about 4 billion years—have we been hit with a GRB in that time? There’s no way to know, but these numbers make it seem plausible. We may be lucky that life survived at all. But the Milky Way is not a particularly GRB-generative place and our spot in it isn’t too susceptible. Other galaxies, and other locations in the Milky Way, are subject to much more frequent hits.

Where stars are denser, LGRBs are more likely—the authors find that the innermost 25% of Milky Way stars are likely to see lethal LGRB events at least once per billion years. A billion years into life on Earth, we had just barely mastered photosynthesis and were still a billion years away from cell nuclei. Imagine if every time we got there, the slate was wiped clean by a GRB. We wouldn’t manage to get very far.

In addition to looking at the GRB hostility in other areas of the Milky Way, the authors look at other locations in the universe. The Milky Way is isolated enough that we’re not prone to GRBs from nearby galactic neighbors, but in other spots the universe is much more densely packed. The authors posit that those dense regions are less friendly to life because of LGRBs, and that galaxies are only habitable in “in voids and filaments of the cosmic web,” which is a lovely way to put “low-density.”

The more we learn about habitability, the more complex it seems. Earth-like is not so simple, nor is the habitable, or “Goldilocks” zone. And now we see that the habitable zone is not just a a planet’s orbit around its star but a star system’s place in its galaxy and the universe. Is life unique, rare, or common? A deepening understanding of the factors doesn’t change the ubiquity of life; it helps us understand it. Or at least estimate its probability.