Last year, I went to a colloquium at the Harvard-Smithsonian Center for Astrophysics given by Bruce Draine, an expert on interstellar dust.  I left the lecture amazed by two things. One: how much Bruce knows about dust (enough to write a textbook, which he did!) and two: that he was able to make dust seem interesting.  Well, today I’m summarizing a paper that makes dust about as interesting as dust can get.  Dust in our galaxy, that is.  So first, a little backstory.

Those of you who follow cosmology (or read the newspaper!) will remember that last March was quite an exciting month, with the BICEP2 collaboration reporting a detection of B-mode polarization (think little arrows following each other in a May-Day-like dance around a central point) at 150 GHz and on scales of about one degree on the sky; see this astrobite for a refresher!  This detection possibly was due to such modes in the Cosmic Microwave Background (CMB), radiation coming from the moment the Universe became neutral 300,000 years after the Big Bang.  If the modes are truly in the CMB, they are most likely due to gravitational waves generated by inflation, an exponential expansion of space-time itself theorized to have occured in the first

However, another explanation for some or even all of the signal BICEP2 saw could be dust in our own galaxy emitting polarized light.  How does this work?  Well, in the absence of Bruce Draine (his text is an excellent reference for those needing more detail!), I’ll do what I can.  Most dust grains are not symmetrical, but have one dimension that’s longer than the others.  This longest dimension tends to align with the magnetic field in our galaxy (there is one, and within our galaxy it has about the same energy content as the CMB).  Thus, one ends up with a fleet of dust grains, all pointing along the magnetic field.  Insofar as the field is coherent (i.e. doesn’t change direction too much), this means that there will be large swathes of our galaxy where dust grains are all pointing in the same direction.  Each of these grains, because it has one long axis, preferentially emits light that oscillates in one direction.  Light oscillates? Well, more precisely, light is just oscillations in the electromagnetic field (imagine a vibrating string), and the oscillations can in general be in whatever plane they like.  Polarization refers to the plane the oscillations are in (i.e., what direction is the string vibrating—up/down or left/right?)  Now, since all of the grains are aligned, the light from all the grains is oscillating in the same plane, so it all adds up and we see net polarization.  A fun, less scary interjection: sunglasses often block one polarization of light (it has two), because there is a similar phenomenon as light is reflected from water: this reflection produces a single polarization that can be effectively blocked so sailors’ evade glare.

Ok, so what does dust polarization have to do with inflation? Well, as I said, the dust can produce a signal that mimics the signature of inflation in the CMB.  Today’s paper attempts to assess whether this is actually happening.

Unfortunately, it gets complicated pretty fast!  BICEP2 measured polarized light at 150 GHz, but the Planck paper today focuses on polarized light at 353 GHz.  Why? Because we know that inflation doesn’t produce much signal there, but dust does.  Therefore, a signal seen at 353 GHz is pretty unambiguous: we know it’s dust.  (The Planck paper does consider other explanations, such as synchrotron emission, polarized point sources, and carbon monoxide emission, but there are ways to rule these out). The Planck paper then extrapolates from the 353 GHz dust emission down to predict what the polarized dust emission should be at 150 GHz, where the BICEP2 measurement is.

How do they do this? Well, the Planck mission actually has polarization data at 100, 143, 217, and 353 GHz.  The authors use this range of measurements to create a model for the dust’s spectrum (how much polarization there is at a given frequency). They find a modified blackbody to give a good fit: this is just a blackbody multiplied by frequency

is the blackbody and

. You might wonder, as did I, how they know that at lower frequencies (e.g. 143 GHz), their “dust” signal is not actually including some of the inflation-generated polarization as well: the answer is that they study the dust’s frequency dependence in a variety of regions of the sky, many of which have so much dust that it would wash anything else out.

Using this extrapolation, they do several things.  First, they look at many different patches of sky of about the size the BICEP2 team used, and they calculate how well each patch could fake the amplitude of an inflationary signal at the scales where the latter would be strongest (about a degree on the sky). Note that this is only using amplitude information at one scale: in reality the inflationary signal varies in a particular way as one changes the scale on the sky one is looking at.  So for the dust to just fake the value at one scale, by itself, would not be compelling evidence that the BICEP2 signal is all dust. However, already for this analysis they do have a beautiful and interesting figure (below): it shows how much dust could “fake” an inflationary signal (at the one scale) in lots of regions of sky.  Not only is it pretty, but it shows that there actually may be cleaner regions of the sky (though not by much) than that BICEP2 used: an opportunity, perhaps, for future telescope pointings? 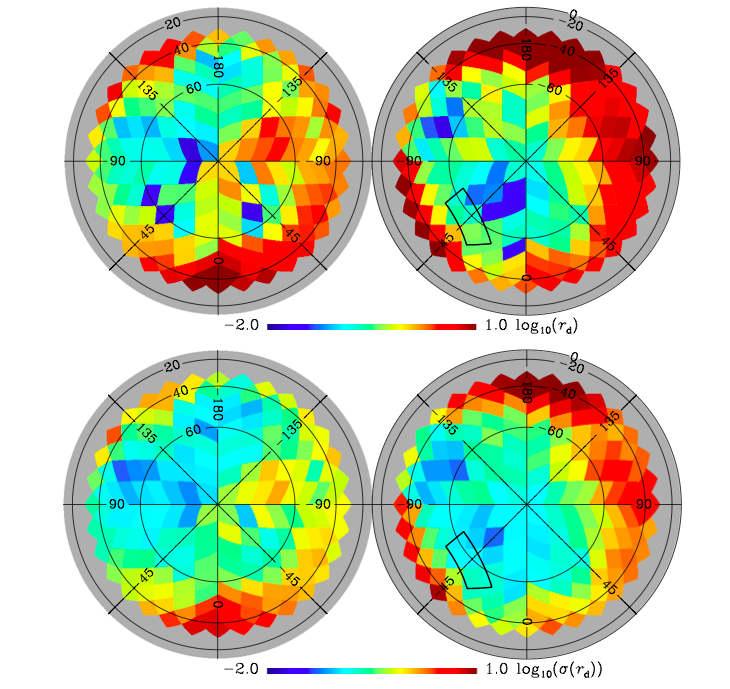 Upper map shows the amplitude of inflationary signal (at one particular scale) one would infer if one wrongly thought the dust signal was from inflation. The black box is the BICEP2 region; notice there are slightly cleaner regions in both upper panels (darker blue). The left hand column is the Northern sky, the right the Southern sky.
The bottom panels show the errors on the top panels: taking a given region in the top row and then matching to the same region on the bottom row tells one how accurate Planck’s inference is in the chosen region on the top row; cooler colors mean more accurate. Figure 8 from the paper.

The Planck paper goes on to put in some information on how the dust signal varies with scale.  They focus in on the actual region BICEP2 used (more or less: they have a complicated procedure for trying to approximately reproduce this region, with some smoothing of its boundaries for technical reasons).  In this region, the authors compute the 353 GHZ polarization signal’s  “angular power spectrum” (basically, as you look at different scales on the sky, how periodic is the variation on that scale?)—sort of.  They basically just do so in three large bins that are flat (look at the Figure, below).  Why do they not give a more beautiful, more finely sliced curve? Presumably to enhance signal to noise: dividing all the data into just three different bins means each bin has a lot of data!  Even with the blocky-looking bins, though, this plot can make one a little queasy: the authors overplot a single, black curve showing what inflation would predict if it had the same signal BICEP2 ascribes to it.  This curve is bang-on within the three dust bins.  One hopes it is not thereby consigning the inflationary signal detection to the dust bin!  But certainly, it is suggesting (keeping in mind that extrapolations, though reasonably justified, are involved) that polarized dust could produce the entire signal BICEP2 saw. 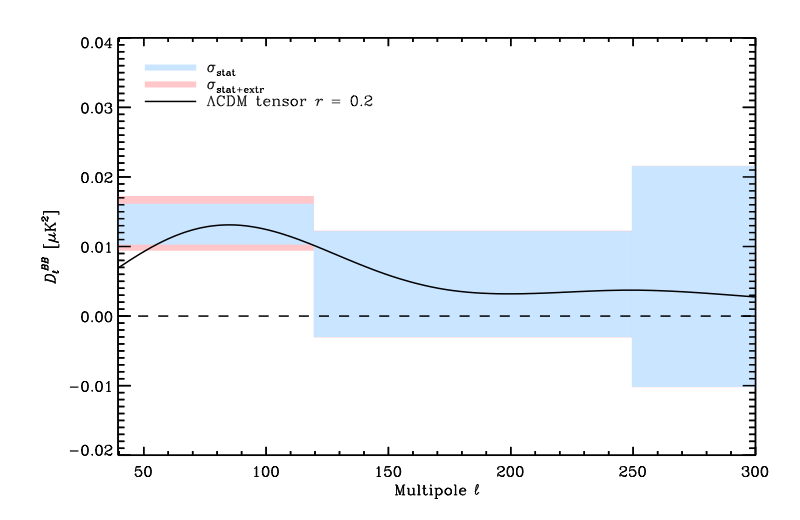 The three light blue bins represent how much polarized light dust could be producing in the BICEP2 region at the BICEP2 frequency. The amount is plotted versus scale on the sky; higher “multipole” actually corresponds to smaller scales on the sky; these scales are all around one degree on the sky. The black solid curve is the predicted signal from inflation if all of the BICEP2 signal is from inflation: unfortunately, it is right in the middle of the dust, meaning that the dust emission could (though there is extrapolation) be responsible for all of it. Figure 9 from the paper.

This has been a hot topic for a few months now. Flauger, Hill, and Spergel and Mortonson and Seljak both had recent papers pointing out the potential contamination by dust emission. Meanwhile, Colley and Gott have a completely novel analysis that ignores the amount of dust emission at 150 GHz in the BICEP2 region (which is uncertain). Instead, their analysis focuses on the clustering of the dust emission, comparing it to that of the possible inflationary signal to see if they are similar. Quite soon, there should be an ur-paper coming out as a collaboration between the BICEP2 and Planck teams: whether it will be the final word on an inflationary signal or just the beginning remains as yet unknown.