Title:  The frequency of planetary debris around young white dwarfs

Figure 1: Example Hubble Space Telescope spectrum of a metal polluted white dwarf (a) with zoomed in sections showing the absorption lines from silicon (b, c ) and carbon (d, e). The red line shows the model atmosphere fit to the spectrum, used to calculate how much of each metal was present. Image Credit: Koester et al 2014

Over the past decade the study of planetary debris in orbit around white dwarfs has become an increasingly exciting area. Observations of this debris have allowed us to make unique discoveries about the chemical composition of extrasolar rocky planets, as well as revealing the endpoints of the evolution of planetary systems very similar to our own.

A key missing piece of information in these studies has been just how many, or more accurately what proportion of, white dwarfs have debris. Although many debris-polluted white dwarfs have been found, most of them were given away by other features such as orbiting dusty or gaseous debris discs. This leaves key questions unanswered.

For example, how many of the stars that formed the white dwarfs had planets? Does it depend on the kind of star? How do these evolved planetary systems change over time? In order to answer these questions, the authors have tried to gain an unbiased measurement of the frequency of planetary systems of white dwarfs.

The easiest way to spot the planetary debris in a white dwarf’s atmosphere is to look for light absorption by calcium, which creates a distinctive line in the blue end of a white dwarf’s spectrum. Unfortunately this calcium line tends to diminish at temperatures above around 15000K, severely limiting the range over which any results from the survey would be relevant. More importantly however, calcium only makes up a small fraction of the material in the planets of the Solar System, so might only show up in the spectra of more heavily polluted white dwarfs- not exactly an unbiased sample!

To get around this problem the authors decided to instead look for silicon, which makes up around a third of the Earth. If the composition of the planetary systems at white dwarfs are similar,  the silicon should therefore be easy to spot even in mildly polluted white dwarfs.  Unfortunately, all of the convenient silicon lines in the spectrum of a white dwarf are found in the ultraviolet. Earth’s atmosphere blocks out UV light, so this survey would need to use the Hubble Space Telescope.

The authors used a snapshot survey, providing a list of over a hundred white dwarfs that could be quickly observed in any order in the gaps between other, longer observations. Within a certain temperature range (17000—27000K), these white dwarfs were chosen at random. Over three years, eighty-five white dwarfs from their list were successfully observed, enough to get a good grip on the statistics of debris pollution. 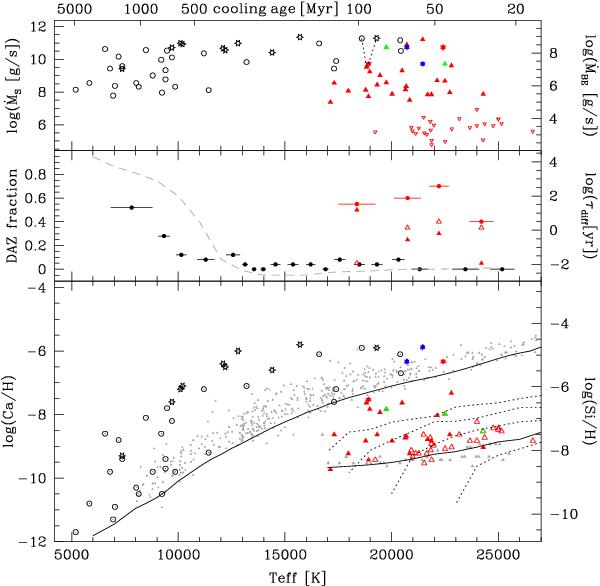 Figure 2: The key findings of the paper. The horizontal axis shows the temperature of each white dwarf (bottom), which is analogous to the time since the star turned into a white dwarf (top). Red symbols show the results from the paper, with other white dwarfs shown in black and grey. Image Credit: Koester et al. 2014

The results of the survey are surmised in Figure 2. The key observation is the middle panel, showing the fraction of polluted white dwarfs. Out of the 85 white dwarfs, the authors found pollution from planetary debris in an astounding 48 (56%). This means that at least half of white dwarfs are orbited by the remains of planetary systems. Put another way, that means that at least half of the stars that turned into the white dwarfs once had orbiting planets. This result agrees nicely with the latest estimates from direct studies of exoplanets.

Out of those white dwarfs with debris pollution, analysis of their atmosphere shows that at half of them must be currently accreting rocky objects, whilst the other half will have been accreting recently. Far from being a few scattered objects, this paper has shown that active evolved planetary systems are abundan, and offer an intriguing opportunity to study the death-throes of planetary systems- including, eventually, the Solar System itself.