As a scientific field driven by observation, astronomy has a knack for grouping objects together that kinda-sorta look alike, regardless of their underlying physics. Take, for example, our supernova classification scheme. While all supernovae mark the explosive death of a star, they have a wide range of properties. Historically, supernovae are broadly grouped into two categories based on their spectra: Type I’s (which lack signs of hydrogen in their spectra) and Type II’s (which have hydrogen lines). As it turns out, these categories are largely unrelated to the actual physical process driving these explosions. Confusing, right? In today’s paper, the supernova community faces another case of bad taxonomy: objects collectively known as “supernova impostors.”

In theory, supernova impostors are extremely bright explosions of stars which look a lot like supernovae. Unlike supernovae, they leave behind most of the progenitor star surrounded by a shell of newly formed dust. The most famous example of such an object is Eta Carinae’s larger star which has undergone multiple explosions throughout the 1700 and 1800s. While the exact mechanisms of these blasts are uncertain, they appear commonplace in massive Luminous Blue Variable stars (LBVs) like Eta Carinae. Figure 1 shows Eta Carinae as seen by Hubble, surrounded by its homunculus nebula. 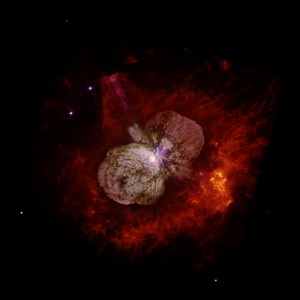 Fig. 1: Eta Carinae as seen by Hubble. Eta Carinae is a supernova impostor that has undergone several eruption events.

As the name suggests, SN1997bs was first discovered in April of 1997 and was classified as a type IIn supernova. The supposed-supernova then faded to be even dimmer than its pre-explosion progenitor star, and appeared to hold steady in the early 2000s. Originally, the flattening of the light curve was interpreted as the steady flux of the explosion’s survivor – making SN1997bs a supernova impostor.

Today’s paper relies on recent photometry to answer the basic question: is the star really still there? The authors monitored SN1997bs with Hubble, Spitzer and the Large Binocular Telescope (LBT) until 2014 — nearly two decades after the initial transient! They find that the object has continued to dim far below the progenitor’s initial brightness, as seen in Figure 1. In fact, there is no highly significant detection of the star in any of the images dated between 2013 and 2014. If the star is no longer detectable, what does that mean about SN1997bs? The authors discuss a few theories: 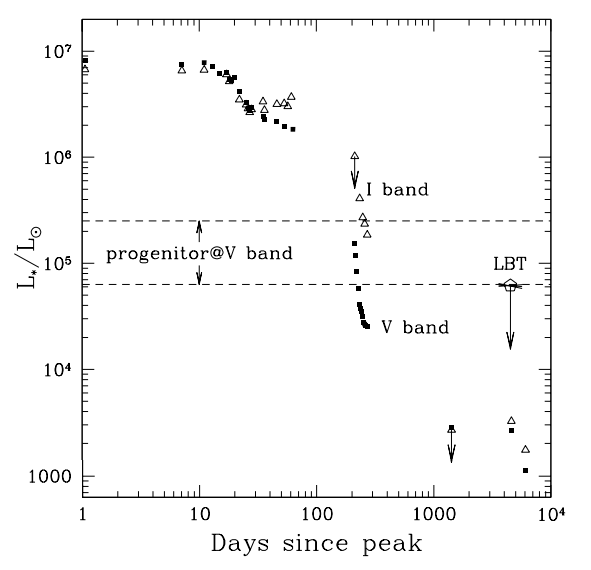 Fig. 1: Optical light curve of SN 1997bs. SN1997bs appears to dim past its progenitor’s original brightness (shown in dotted lines). Here the V (squares) and I (triangles) optical bands are shown, including a V-band upper limit from LBT.  All of the points past 1000 days are all upper limits on SN1997bs’s brightness.

In order to be sure that SN1997bs was an authentic supernova, we need better observations to confirm that the star has vanished. Although a compact remnant, like a neutron star, might exist after this explosion, it would be far dimmer than the original star. The uncertainty in SN1997bs’s real identity highlights a fundamental flaw in how we label and study impostors: What if SN1997bs, an archetype of supernova impostors, isn’t an impostor after all? As our knowledge in this field grows, we need to be careful about classifying these eclectic “impostors.”