Our day-to-day experiences with gravity are fairly tame. It keeps our GPS satellites close and ready for last-minute changes to an evening outing, brings us the weekend snow and rain that beg for a cozy afternoon curled up warm and dry under covers with a book and a steaming mug, anchors our morning cereal to its rightful place in our bowls (or in our tummies, for that matter), and keeps the Sun in view day after day for millennia on end, nourishing the plants that feed us and radiating upon us its cheering light.  In concert with a patch of slippery ice, gravity may produce a few lingering bruises, and occasionally we’ll hear about the brave adventurers who, in search of higher vistas, slip tragically off an icy slope or an unforgiving cliff.  But all in all, gravity in our everyday lives is a largely unnoticed, unheralded hero that works continually behind the scenes to maintain life as we know it.

Park yourself outside a relatively small but massive object such as the supermassive black hole lurking at the center of our galaxy, and you’ll discover sly gravity’s more feral side. Gravity’s inverse square law dependence on your distance from your massive object of choice dictates that as you get closer and closer to said object, the strength of gravity will increase drastically: if you halve your distance to the massive object, the object will pull four times as hard at you, and if you quarter your distance towards the object, it’ll pull sixteen times as hard at you, and well, hang on tight to your shoes because you may start to feel them tugging away from your feet. At this point though, you should be high-tailing it as fast as you can away from the massive object rather than attending to your footwear, for if you’re sufficiently close, the difference in the gravitational pull between your head and your feet can be large enough that you’ll stretch and deform into a long string—or “spaghettify” as astronomers have officially termed this painful and gruesome path of no return. 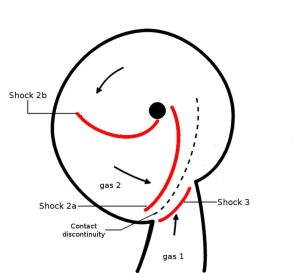 Figure 1. A schematic of the accretion disk created when a star passes too close to a supermassive black hole. The star is ripped up by the black hole, and its remnants form the disk. Shocks (red) generated as stellar material falls onto the disk produce the light we observe. [Figure taken from today’s paper.]

While it doesn’t look like there’ll be a chance for the daredevils among us to visit such an object and test these ideas any time soon, there are other things that have the unfortunate privilege of doing so: stars. If a star passes closely enough to a supermassive black hole so that the star’s self-gravity—which holds it together in one piece—is dwarfed by the difference in the gravitational pull of the black hole on one side of the star to the other, the black hole raises tides on the star (much like the oceanic tides produced by the Moon and the Sun on Earth) that can become so large that the star deforms until it rips apart.  The star spaghettifies in what astronomers call a tidal disruption event, or TDE, for short. The star-black hole separation below which the star succumbs to such a fate is called its tidal radius (see Nathan’s post for more details on the importance of the tidal radius in TDEs). A star that passes within this distance sprays out large quantities of its hot gas as it spirals to its eventual death in the black hole. But the star doesn’t die silently.  The stream of hot gas it sheds can produce a spectacular light show that can lasts for months. The gas, too, is eventually swallowed by the black hole, but first forms an accretion disk around the black hole that extends up to the tidal radius. The gas violently releases its kinetic energy in shocks that form near what would have been the original star’s point of closest approach (its periapsis) and where the gas wraps around the black hole then collides with the stream of newly infalling stellar gas at the edge of the disk (see Figure 1). It is the energy radiated by these shocks that eventually escape and make their way to our telescopes, where we can observe them—a distant flare at the heart of a neighboring galaxy.

Or so we thought.

TDEs, once just a theorist’s whimsy, have catapulted in standing to an observational reality as TDE-esque flares have been observed near our neighborly supermassive black holes. An increasing number of these have been discovered through UV/optical observations (the alternate method being X-rays), which have yielded some disturbing trends that contradict the predictions of the classic TDE picture. These UV/optical TDEs aren’t as luminous as we expect. They aren’t as hot as we thought they would be and many of them stay the same temperature rather than decrease with time. The light we do see seems to come from a region much larger than we expected, and the gas producing the light is moving more slowly than our classic picture suggested. Haven’t thrown in the towel already?

But hang on to your terrycloth—and cue in the authors of today’s paper. Inspired by new detailed simulations of TDEs, they suggested that what we’re seeing in the optical is not the light from shocks in an accretion disk that extends up to the tidal radius, but from a disk that extends about 100 times that distance. Again, shocks from interacting streams of gas—but this time extending up to and at the larger radius—produce the light we observe. The larger disk automatically solves the size problem, and also conveniently solves the velocity problem with it, since Kepler’s laws predict that material would be moving more slowly at the larger radius. This in turn reduces the luminosity of the TDE, which is powered by the loss of kinetic energy (which, of course, scales with the velocity) at the edge of the disk. A larger radius and lower luminosity work to reduce the blackbody temperature of the gas. The authors predicted the change that each of the observations inconsistent with the classic TDE model would undergo under the new model, and found that they agreed well with the measured peak luminosity, temperature, line width (a proxy for the speed of the gas), and estimated size of the emitting region for seven TDEs that had been discovered in the UV/optical, and found good agreement.

But as most theories are wont to do, while this model solves many observational puzzles, it opens another one: these lower luminosity TDEs radiate only 1% of the energy the stellar remains should lose as they are accreted onto the black hole.  So where does the rest of the energy go?  The authors suggest a few different means (photon trapping? outflows? winds? emission at other wavelengths?), but all of them appear unsatisfying for various reasons.  It appears that these stellar corpses will live on in astronomers’ deciphering minds.