Astronomers, creative as they are, came up with three mechanisms by which this might happen. The first and simplest scenario is gas accretion onto high mass (10-100 M☉) black holes left behind by the first generation of stars. There is an upper limit to this accretion rate which is set by the balance between the gravitational force of the infalling materials and the repulsive radiative force from the black hole accretion disks. This limit is known as the Eddington limit. In order to grow 109 M☉ black holes within the first Gyr after the Big Bang, baby black holes have to accrete at the Eddington limit since birth for their entire lifetime, which is unlikely due to some form of radiative feedback from the accreting black holes.

A second way to form SMBH is via major mergers. This is not a promising route as mergers could expel gas during the merging process, thus halting rather than encouraging accretion. Gases are ejected due to the large kick velocity from the merger.

The third method to form a SMBH is by first forming a supermassive star (SMS) with mass >~ 105 M☉ very early on in the history of the Universe . The supermassive star will form a SMBH when it collapses and dies. SMBH that forms from the direct collapse of a SMS is also known as a direct-collapse black hole or DCBH (because we astronomers love to name things and are obsessed with acronyms). This is favorable as the larger mass of the initial black hole seed reduces the accretion time needed to reach ~109 M☉. The third formation scenario will be the focus of today’s astrobite. The topic of supermassive stars as progenitors of SMBHs has been explored in the past in various astrobites, such as this one.

Recipe of the Day: A Dash of Supermassive Stars and A Pinch of Colliding Protogalaxies

How do we form supermassive stars? Almost the same way we form normal-sized stars, through the collapse of gas clouds. In normal star formation, the gas clouds comprise primarily of molecular hydrogen, which helps keep the clouds very cool and consequently promote fragmentation into smaller clumps. These small clumps are the birth places of the stars we see today.

To create a SMS, we do not want the cloud to fragment; instead, the gas cloud should collapse as one giant blob into one massive protostar. To do this, we need to prevent cooling in the gas cloud, which can be done with low-metallicity (as metals are major cooling agents) and no H2. The whole problem of SMS formation thus amounts to how well we can suppress H2 cooling in the parent gas cloud. One pathway to achieve this is by breaking up H2 through collision: H2 + H → 3H. This can happen at high enough density and temperature typical of collisions in gas clouds.

The authors of today’s paper collide two protogalaxies  (gas clouds en route to forming galaxies) and their dark matter halos at high velocities as a way to form SMS that also circumvents the problem of H2 cooling. High-velocity — we will define what “high-velocity” mean soon — collision of protogalaxies will create a hot and dense enough region to destroy H2 via collisions. In order for this to happen, the collision has to happen within a certain velocity range: too low and the gas will not be shocked to the required density and temperature; too high and the gas will not be able to cool and collapse. Figure 1 shows the collision-velocity window which depends on redshift. For a SMS to form at z >~ 10 (~400 Myr after the Big Bang), protogalaxies have to collide with a relative velocity of >~ 200 km/s. 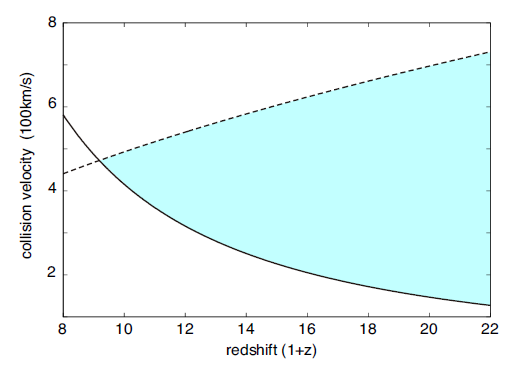 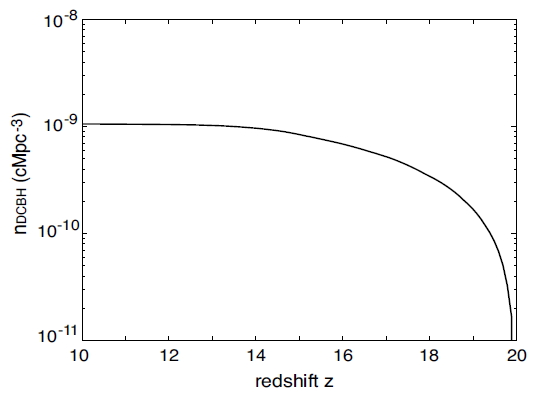 Are there any observable signatures from protogalaxy collisions? Possibly. Since the gas in the colliding system are mostly neutral, there will be cooling radiation from regions that undergo such collisions. This radiation could be detected by the James Webb Space Telescope (JWST).

So is the mystery of SMBHs solved? Can we now declare victory, pack up, and go home? Not quite…The authors adopted several assumptions in their paper, some of which are more valid than the others. For instance, the thermodynamics of the colliding gas is treated one-dimensionally. However, protogalaxy collisions are actually three-dimensional, so we need 3D simulations to fully capture this formation scenario. Additionally, there are also uncertainties involved in estimating the frequency of protogalaxy collisions.

The formation of supermassive stars via collisions of protogalaxies is intriguing. To first order, it is able to produce roughly the same number density of SMBHs as suggested by high-redshift quasars. However, there are still rough edges that need to be smoothed out before we can say for sure that we’ve nailed down the solution to the problem of SMBH formation.