Why easy when you can make it complicated?

The historic picture of star formation (SF), that interstellar gas directly collapses due to its own gravity, bears problems of oversimplicity. Incorporating this view into simulations of the process results in a crazy high star formation efficiency, which means that much too much gas is turned into stars. A long time, it was thought that magnetic effects like ambipolar diffusion, in which charged particles coupled to the magnetic field slow down uncharged ones by collisions, hinder the efficiency of the star formation process and reduce the star formation rate to levels observed. However, this picture requires the centers of molecular cloud cores, where stars are created, to be extremely dense and their envelopes to feature high magnetic fluxes, which is unfortunately not observed. Thus, there must be other mechanisms helping to suppress that all gas gets turned into stars quickly.

Turbulence and other stuff…

In the simulations performed one physical mechanism is added each time, starting from a relatively simple simulation to a more and more complex one with all ingredients turned on. The following video (created by C. Federrath, make sure to watch the video in HD) shows the density of gas along our line of sight, indicated from white (low density) to blue (intermediate density) and yellow (high density). Stars that have been successfully formed are shown as white dots. Each box represents a simulation with a specific combination of the above mechanisms (check the descriptions in the top left).

So what do we see? Obviously, in the simulation with gravity only (top left) a lot of stars pop up extremely quickly. Adding more and more mechanisms from the above list decreases the star formation efficiency and star formation rate, as nicely visualised in Figure 1. 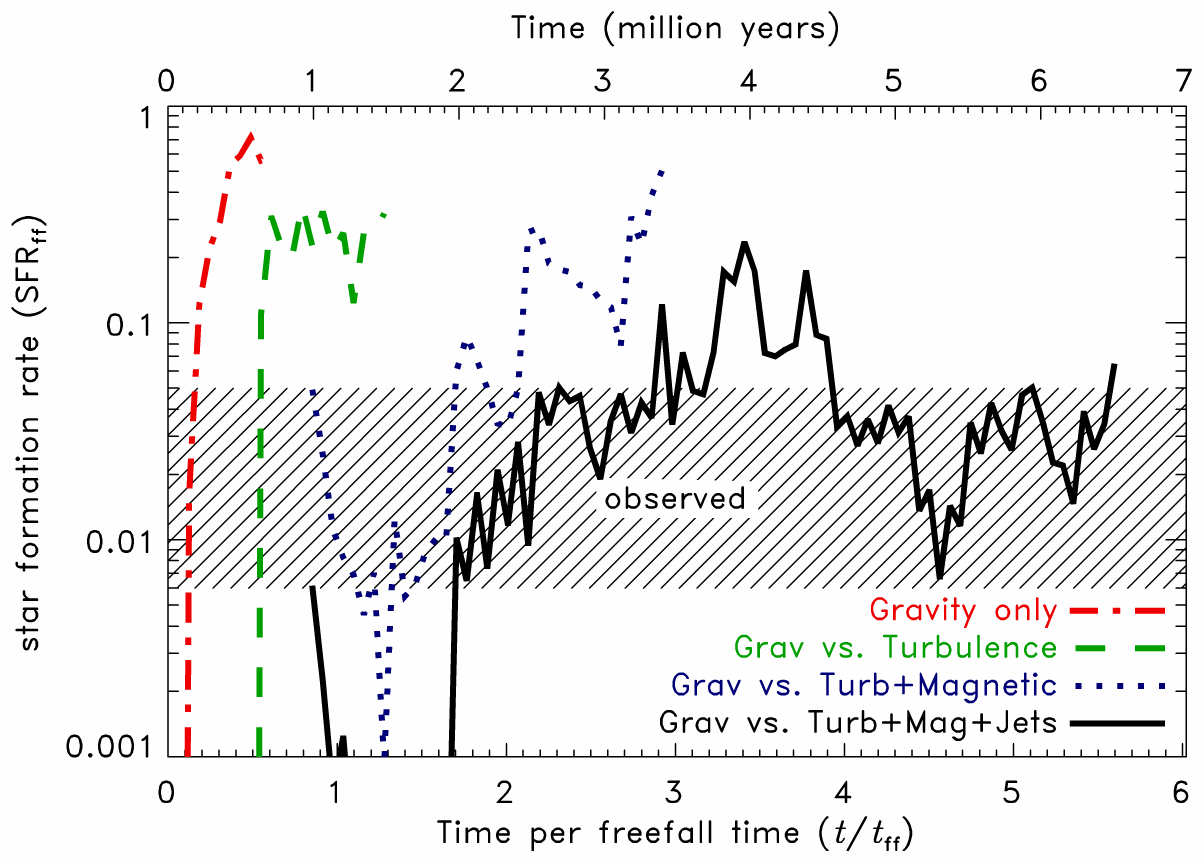 Figure 1: Rate of star formation versus time including different physical mechanisms. The black dashed region indicates the area which is constrained from observations. The SFR is much too high for more simple simulations. Adding more complexity by considering turbulence, magnetic fields and stellar feedback by jets and outflows decreases it to more realistic values. The sudden drop in SFR at t ~ 4 freefall times for the feedback simulation (black line) is supposed to relate to self-regulation of the feedback mechanism (see text). Source: Federrath (2015)

As it seems, each of the ingredients used in the more and more complex simulations reduce the SFR by about a factor two!  This means, turbulence, magnetic fields and stellar feedback seem to contribute approximately equally to the needed decrease in the SFR. Additionally, the sudden drop in SFR in the most complex simulation shows signs of an emergence phenomenon: After an initial burst in star formation by the collapsing gas the jets and outflows of the forming stars trigger turbulence in the surviving gas, which increases fragmentation, leading to more smaller clumps with an overall lower SFR. From that point onwards the SFR stays rather constant, which can be seen as a self-regulation mechanism.

Reality check and ways to go

The most notable result from this work is that the simulations reached a star formation rate similar to the rate observed in molecular clouds . The most complex simulation features an SFR ~ 0.04, in comparison with SFR ~ 0.01 for observations. From that, the author concludes that the role of turbulence and magnetic fields are likely higher than speculated by recent computational results, which underlined the importance of stellar feedback but were not able to reach values as low as this. Eventually, the author argues that further reduction of the SFR in theoretical studies needs to consider additional types of feedback like done in this study. A possible candidate here might be radiation pressure, which is the influence of stellar irradiation on the surrounding gas.