Gone Without a Bang

So what happens to stars in between? You might guess that they will also explode in a spectacular supernova, following the pattern of their siblings. As it turns out, many of these stars can die by collapsing into a black hole…without their characteristic supernova. How does this work?

Core-collapse supernovae usually explode when the inner iron core of a massive star has reached its Chandrasekhar mass and cannot support itself against its own gravity. The core then collapses until it reaches the density of an atomic nucleus – or about 5 billion tons for a teaspoon of matter. At this point, the infalling material rebounds outwards, producing a shockwave that blasts the outer layers of the star with the help of neutrinos, leading to a supernova. Things can go awry in this last step. If insufficient energy is supplied to the shock, the shockwave may stall before leaving the star. This lapse allows the black hole formed by the inner core of the star to simply gobble up the star before an explosion can occur. And–poof!–just like that, the star is gone.

Well, sorta. It’s predicted that there will be a very dim (about 10,000 times fainter than a supernova), red and long transient from the explosion, but we have never seen such an event! This is especially odd because these events shouldn’t be that rare; about 1/3 of all core-collapse may actually result in a failed supernova.The evidence for these events is the fact that red supergiants should end their lives as supernovae, but we haven’t found many that have done so (greater than about 15 times the mass of our Sun). This is known as the “Red Supergiant Problem”. The question then seems obvious: could these red supergiants be disappearing into the night sky as failed supernovae? 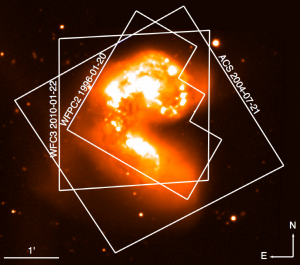 This is what the authors of today’s paper explore this question by looking for the culprits themselves. The astronomers look for stars which have disappeared using archival data from the Hubble Space Telescope (HST). HST has been orbiting the Earth since 1990, so it has the unique advantage of having plenty of high quality images of galaxies, such as the Antenna galaxies in Figure 1. The authors look for galaxies which have been observed multiple times by HST over the course of its life, searching for any disappearing stars. In theory, you would only need three HST images in sequence to do this: two images before the failed supernova to ensure that the star was not extremely variable and a second image to capture its disappearance. By narrowing down the possible galaxies using this criterion, as well as some distance and galaxy-type cuts, the authors are able to find six potential failed supernovae in fifteen galaxies.

Of these six candidates, two are actually bright, variable stars and three others are far too dim to be red supergiants. This leaves a single, potential failed supernova! The lightcurve of this mysterious star is shown in Figure 2.

The authors can’t be entirely sure that this is truly a failed supernova based on the HST data alone; other transients or variable objects can mimic the predicted lightcurve of a failed supernova. One notable possibility are R Coronae Borealis stars (RCB), which are evolved stars lacking hydrogen. RCB stars can dim by many order of magnitude, likely due to intense clouds of carbon dust in their atmosphere. If these stars dim during the last few observations, they might seem to have disappeared altogether. Future data on this candidate would certainly help to unveil its true identity. 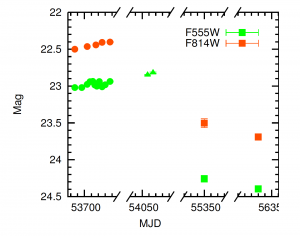 Fig 2: Light curve of a possible failed supernovae in NGC3021. The candidate clearly dims during the last two observations, but it is uncertain if it has disappeared altogether. [Figure 6 of Reynolds et al. 2015]

This is now the second survey to search for failed supernovae, following a survey by Gerke et al. in 2014 which used the ground-based Large Binocular Telescope. Both of these surveys resulted in single candidates, but, unfortunately, neither had sufficient data to build a complete transient lightcurve. In this regard, the mystery surrounding failed supernovae remains unsolved. This leaves an extremely exciting open question about the nature of black hole creation when a supernova fails to explode and the solution to the Red Supergiant Problem. Lastly, it’s worth emphasizing that this study was done on a small fraction of the thousands of galaxies publically available on the Hubble Archive – there is nothing stopping you, the reader, from trying to find a failed supernova for yourself!