Gamma ray bursts (GRBs) are among the most dramatically explosive events in the universe. They’re often dubbed the largest explosions since the Big Bang (it’s pretty hard to quantify how big the Big Bang was, but suffice it to say it was quite large). There are two classes of GRBs: long-duration and short-duration. Long-duration GRBs (which interest us today) are caused when extremely massive stars go bust. 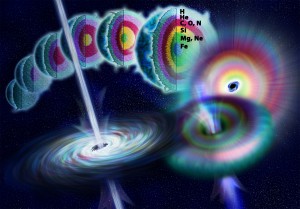 Fig 1. – Long-duration GRBs are thought to form during the deaths of the most massive stars. As the stars run out of fuel (left to right) they star fusing heavier elements together until reaching iron (Fe). Iron doesn’t fuse, and the star can collapse into a black hole. As the material is sucked into the black hole, a powerful jet can burst out into the universe (bottom left), which we would observe as a GRB.

The most massive stars burn through their fuel much faster, and die out much more quickly than smaller stars. Therefore, long-duration GRBs should only be seen in galaxies with a lot of recent star formation. All the massive stars will have already died in a galaxy which isn’t forming new stars. Lots of detailed observations have been required to confirm this connection between GRBs and their host galaxies. It’s, in fact, one of the main pieces of evidence for the massive-star explanation.

The authors of today’s paper studied the host galaxy of a long-duration GRB with an additional goal in mind. Rather than just show that this galaxy is forming lots of stars, they wanted to look at its gas to explain why it’s forming so many stars. So, they went looking for neutral hydrogen gas in the galaxy. Neutral gas is a galaxy’s fuel for forming new stars. Understanding the properties of the gas should tell us about the way in which the galaxy is forming stars.

Hot, ionized hydrogen is easy to observe, because it emits a lot of light in the UV and optical ranges. This ionized hydrogen is found right around young, star-forming regions, and so has been seen in GRB hosts before. But the cold, neutral hydrogen – which makes up most of a galaxy’s gas – is much harder to observe directly. It doesn’t emit much light on its own, but one of the main places it does emit is in the radio band: the 21-cm line. For more information on the physics involved, see this astrobite page, but suffice it to say that pretty much all neutral hydrogen emits weakly at 21 cm.

This signal is weak enough that it hasn’t been detected in the more distant GRB hosts. Today’s authors observed the host galaxy of the closest-yet-observed GRB (980425), which is only 100 million light-years away: about 50 times farther away than the Andromeda galaxy. This is practically just next-door, compared to most GRBs. This close proximity allowed them to make the first ever detection of 21-cm hydrogen emission from a GRB host galaxy. 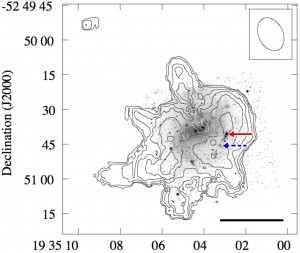 Fig. 2 -The radio map (contours) of the neutral hydrogen gas from 21-cm radio observations. The densest portions of the disk align with the location of the GRB explosion (red arrow) and a currently-ongoing burst of star formation (blue arrow). Fig 2 from Arabsalmani et al. 2015

Using powerful radio observations – primarily from the Giant Metrewave Radio Telescope – the authors made maps of hydrogen 21-cm emission across the galaxy. They found a large disk of neutral gas, which was thickest in the region around where the GRB went off. Denser gas leads to more ongoing star formation, which as we know can mean that very massive stars may still be around to become GRBs.

The most important finding, however, was that the gas disk had been disturbed: more than 21% of the gas wasn’t aligned with the disk. This disturbance most likely came from a merger with a smaller galaxy, that mixed up the disk when passing by. The authors argue that this merger could have helped get the star-formation going. By shock-compressing the gas, the disturbance would have kick-started the galaxy into forming stars and, eventually, resulted in the GRB.

This paper is quite impressive, as it shows that astronomers are probing farther into the link between GRBs and their host galaxies. Astronomers have known for a while that GRBs are sign-posts to galaxies which are forming lots of stars. But today’s paper used radio observations of the gas to connect that star formation to a recent merger. Most GRB hosts are much farther away, and similar observations will be difficult. But with more sensitive observatories – like ALMA or the VLA – it may be possible to see whether the gas of more GRB hosts show evidence of mergers. Perhaps GRBs are telling us even more about their galaxies than we had thought before!