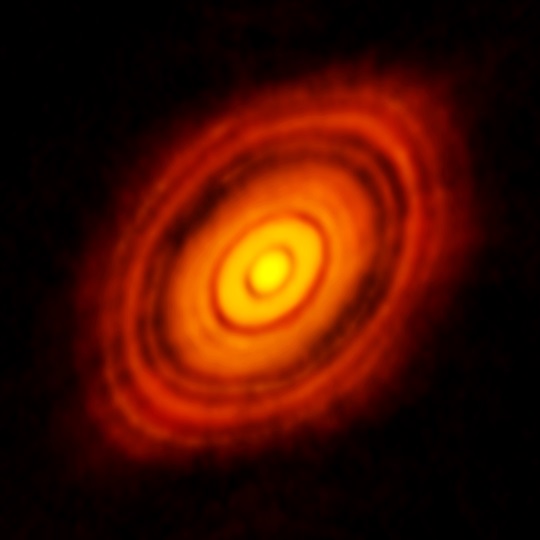 ALMA image of a disc of gas and dust around the young star HL Tau. The dark rings in the disc are thought to be gaps, carved out by giant planets. Image Credit: ALMA (ESO/NAOJ/NRAO)

Nearly a year ago, the ALMA collaboration released this stunning image of the young star HL Tau. The sub-millimeter wavelengths of light that ALMA detects revealed a vast disc of gas and dust, several times larger than Neptune’s orbit. Intriguingly, the disc was divided up into a series of well-defined, concentric rings.

The cause of the rings seemed clear: There must be planets around HL Tau, their gravity sculpting the gas and sweeping out the dark gaps in the disc.

But there was an issue with this hypothesis. HL Tau is a very young star, less than a million years old. Many planetary formation models assume that planets take much longer to grow to the kind of sizes needed to shape the disc like that. If the gaps are being made by planets, then those models will need a serious rethink.

The authors of today’s paper decided to take a closer look, and see if they could spot the hypothetical planets. This isn’t as easy as it may appear. In the part of the electromagnetic spectrum probed by ALMA, the star is relatively dim, allowing the light from the disc to be discerned. However, any planets present would shine in infrared light, with a much shorter wavelength. In infrared, the blinding light from HL Tau would easily outshine that from a planet.

Two techniques were used to overcome this problem. The first was simple: Use the biggest telescope that they could get their hands on, in this case the unique Large Binocular Telescope Interferometer (LBTI).

The second trick was to use adaptive optics. This technique uses a light source, such as a laser or, in the case of the LBTI, a well-known star, to correct for the distortions in light caused by the Earth’s atmosphere. As the telescope’s computers know what the guide star “should” look like, it can continuously  flex a small mirror to counteract the effects of the atmosphere. This makes the images much clearer, enough to directly image planets around some stars.

But even adaptive optics wasn’t enough to show up planets around HL Tau. The last obstacle was the disc itself. The very reason for looking for planets had become a hindrance to spotting them, scattering the light from the star out to much greater distances than usual.

To remove this scattered light, the authors made two infrared observations of HL Tau, one at a slightly redder wavelength than the other. In both, any signal from planets was drowned out by the scattered light. 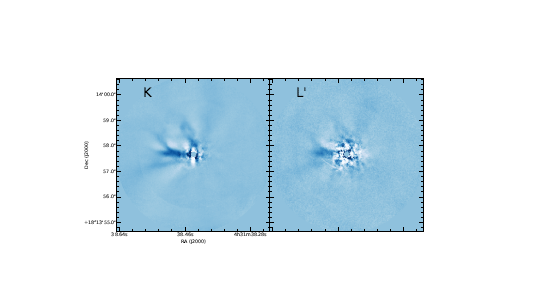 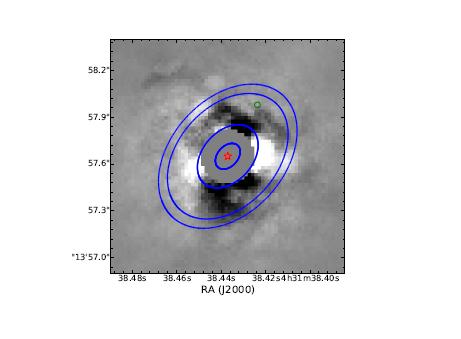 …No planets. Oh well. The subtracted image, with blue lines showing the most prominent gaps in the disc, the red star the position of HL Tau, and the green circle the position of a candidate planet from an older observation. Planets should show up as white dots near the rings, of which there are none to be seen.

When the authors did this, they spotted…nothing. Based on the precision of their data, they conclude that there are no planets larger than 10-15 times the mass of Jupiter near the gaps in HL Tau’s disc.

At first glace that doesn’t seem to be a problem. Planets that large aren’t all that common, and there could easily be planets too small for the LBTI to detect hiding in the gaps.

But planets any smaller than 10 Jupiter masses wouldn’t have enough gravity to shape the disc in the way seen in the ALMA image. Planets or no planets, a new explanation for the complex structure of HL Tau’s disc may be needed.

The authors point out one possible way to solve this problem. ALMA is most sensitive to dust grains around a millimeter across, whilst the disc is probably made of a range of particle sizes. Smaller planets may have just enough gravity to move only the millimeter-scale particles into the observed rings, leaving the rest of the disc relatively untouched.

So are the gaps in the ring really caused by planets, or something else that we haven’t thought of yet? The paper ends by charting out the ways that astronomers can explore this system in the future. Longer observations by ALMA could broaden the range of dust sizes seen, allowing a more complete image of the disc structure to be made. And searches for smaller planets could be carried out, although such precise measurements will probably need to wait for the next generation of truly giant telescopes.