The Earth is weird, and Mercury and Venus too!

The Solar System’s terrestrial planets are really not how we expect they should be. Why? Because we think in the very early stages of their formation they were assembled by the accumulation of planetesimals – myriads of small rocky bodies which formed from the dust in the protoplanetary disk, a gas-dust mixture of interstellar material, which was rotating around the young Sun in the first few million years of its lifetime. The drawback of this idea is, that some elemental abundances in Earth, for example the ratio of iron to magnesium (Fe/Mg), are different from the one of chondritic meteorites – the ones we think are the original matter Earth formed from! That’s too bad, usually you would assume that if you pile up a bunch of very similar rocks, the average content of the pile is the same as every single rock.

However, smart people came up with the following idea: If all these planetesimals swirl around the young Sun they will probably hit each other. And if they hit and bounce, some of the material will be transferred from on to another. Or you even have disruptive collisions, where all material becomes dust, because the impact is so energetic!

Additionally, planetesimals probably had a very distinct structure. In their interior they featured a very massive (iron) core, surrounded by a “mantle” of less dense material (silicates). Now, if you have a collision of two bodies, one of them probably “steals” some mantle material from the other. For example if you have a so-called “hit & run”-collision, instead of head-on. This redistribution of material and change of core-to-mantle ratios is called “collisional stripping” and possibly determines the final compositional abundances of the planets.

The aim of today’s paper is to test whether this collisional stripping can actually account for the specific abundances of the Earth. Carter+ therefore run computer simulations of the dynamics of the planetesimals in the young Solar System in two different flavours. One takes into account the possibly dynamic behaviour of Jupiter shortly after its formation (the “Grand Tack” scenario), the other neglecting this. Below are two videos of the dynamical evolution of two of the simulations. We see inclination i and eccentricity e of the planetesimals plotted against the distance to Sun a (in AU, astronomical units, the distance Sun-Earth), the color indicates from where the material in the planetesimal originates (red inner disk, blue outer disk), the size of the dots corresponds to their mass, and the inner black dot represents the core fraction. They all start with the same core fraction.

The first video above shows how the outer planetesimals are scattered by the gravitational influence of Jupiter. Especially the inner planetesimals grow and grow. At some point Jupiter migrates inward and outward again, violently scattering and disrupting all planetesimals, causing a lot of mixing of outer material into in the inner parts. The simulation stops after ~21 million years (the red value, ignore the black one), at which time the biggest bodies are found in the very inner parts, a sea of smaller objects is found inbetween 1-4 AU and some smaller ones are at around Jupiter’s location.

This second video shows us the differences to the Grand Tack-scenario above. Because no Jupiter is around there is no scattering. Therefore, the dynamics are much calmer and not much scattering occurs. Instead, the planetesimals grow relatively equally at all positions. A striking difference is the composition. As no planetesimals are outside of 1.6 AU and none are scattered inward, no material is incorporated into the bodies in the inner regions.

All of this has one reason – to find out how the dynamics and collisions define the compositions of the later planets. To get an idea of how this is going, the origin of the material at the end of simulations is illustrated in Figure 1. 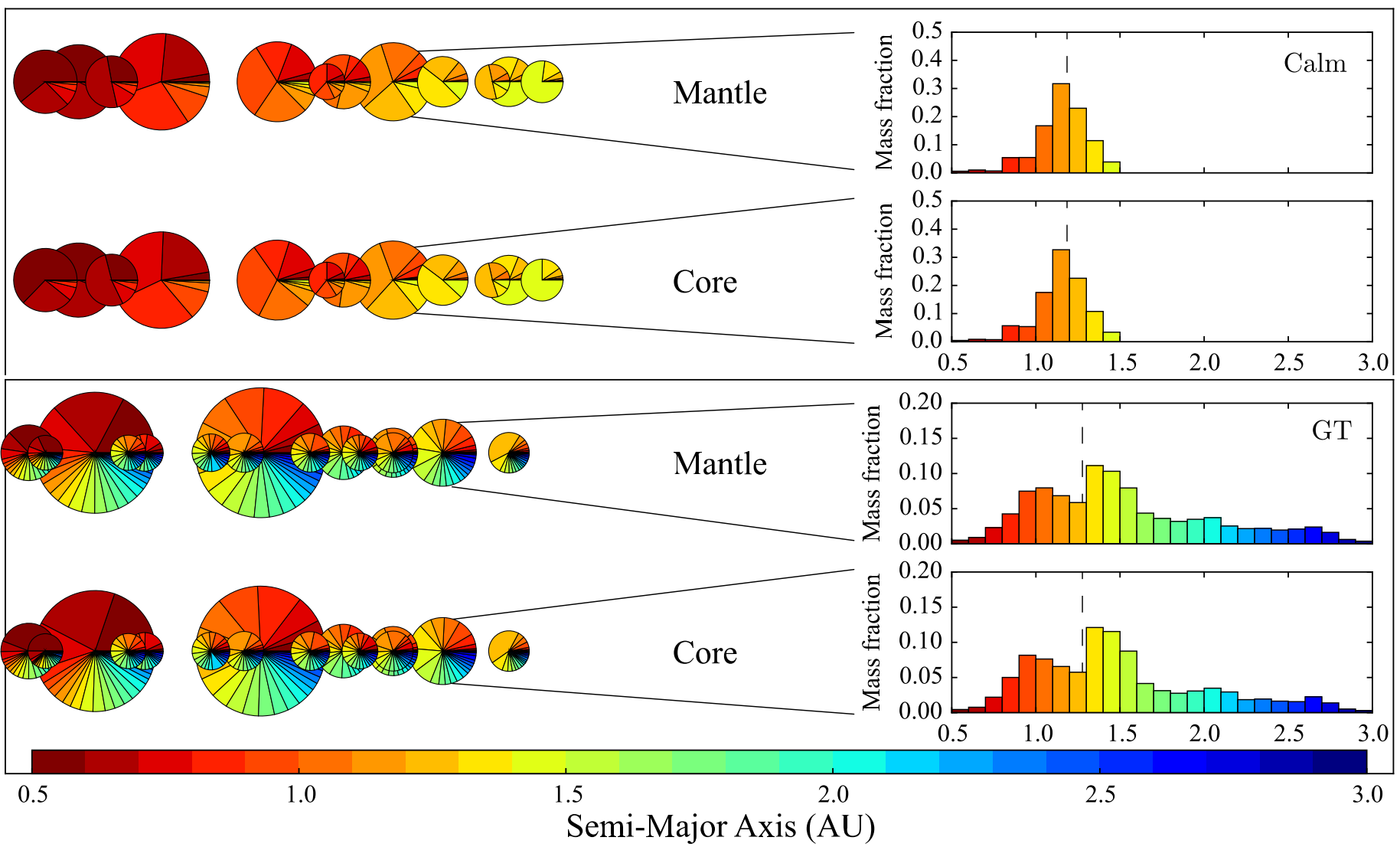 Figure 1: Composition pies for several planetary embryos within a calm disk simulation (top) and a Grand Tack simulation (bottom). The pie sizes are proportional to the object’s radius, showing the composition of mantle and core by color. Blue material originates from the outer disk, red material from the inner disk. The histograms on the right break down the composition for one specific planetesimal, its location indicated by the dashed line. Source: Carter+ (2015)

The Grand Tack simulations show a lot of mixing between the different zones of the disk and therefore incorporate a lot of material from the outer regime. This is because the migration of Jupiter causes a lot of scattering among the smaller sized planetesimals and thus influences their orbits – they migrate inwards and collide with planetesimals there. In contrast, the calm disk simulation shows much less mixing. However, since the calm disk scenarios are truncated at 1.6 AU, it is unclear whether these two effects can be directly compared. But what about the Earth’s composition now? Can the collisional stripping and subsequent mixing of the material account for the shift in composition? See Figure 2. 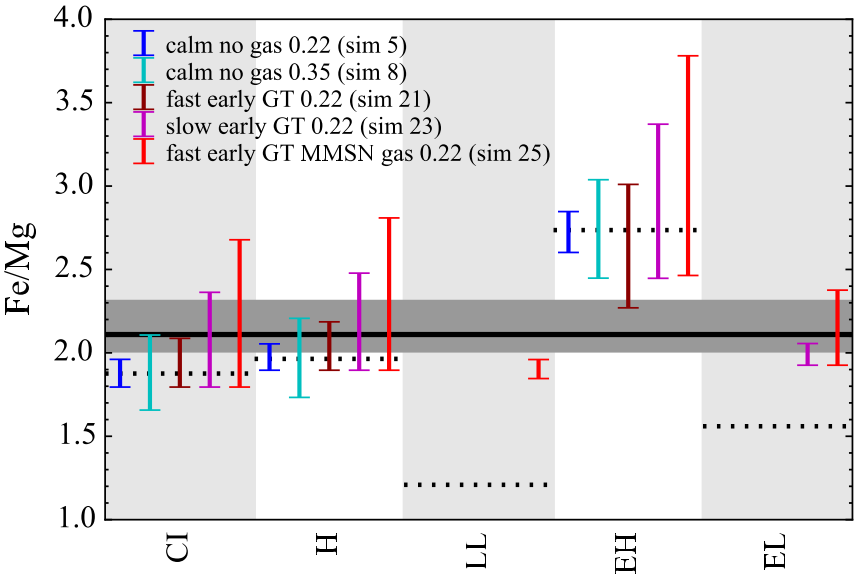 Figure 2: Bulk Fe-Mg (iron-to-magnesium) ratio of final planet embryos at the end of the simulations. The black line shows the bulk ratio of Earth, the gray shadows whether Earth’s core has a 0-15% abundance of light elements. The horizontal lines represent the starting bulk compositions. The different colors of the vertical bars represent the flavour of the specific simulation. The bars are created by assuming that all planetesimals in the simulation are initially of compositional type alike different types of meteorites. The maximum value of the bar represents the Fe/Mg ratio of the embryo with maximum core ratio. The minimum value gives the lower limit which is required to fit Earth’s core. We see that the calm disk scenarios fit Earth’s conditions only in extreme cases, whereas the Grand Tack scenarios can easily account for the right conditions in the case of CI/H chondrite meteoritic composition. Source: Carter+ (2015)

This shows us that in the Grand Tack scenarios it is very well possible to fit the requirements of Earth’s composition! However, the calm disk scenario does not seem to produce such an attractive outcome with regards to Earth’s values.

All in all this is great news! In principle, the collisional stripping model can account for the strange abundance shift from planetesimals to finally assembled planets. Even as the final embryos in the simulations are not yet planets and they still need to go through the giant impact phase (where the biggest bodies hit each other), the initial conditions for attracting results are set. Additionally, the large scatter in core fractions (look at the two videos and see that there are many bodies with core fractions close to 1 and close to 0) strengthens the idea that iron meteorites, which are mostly composed of iron-nickel, are in fact the fragments of differentiated planetesimal cores!

Note: All videos are linked from the page of the first author, Philip J. Carter. See http://www.star.bris.ac.uk/pcarter/comp_evo_15/.