Title: Is there a maximum mass for black holes in galactic nuclei?

This is less a physical question than a moral one. Should we feed a black hole? If we do, will it ever learn to feed and fend for itself independently? Will it ever truly be able to return to the wild, or will it ever after be chained to the yoke of domestic comfort?

My uncle found a black hole once in the woods, and he used to feed it tinned peaches. Two summers later he released it into the wild, and after only two days it was found in the canned goods aisle of a local supermarket.

If we ever want black holes to stand on their own four legs, we need to st-

Oh. Wait. My editor’s just told me I’m getting black holes and wolf pups confused again. My apologies, obviously there’s no moral question of whether or not we feed a black hole, because whatever we try we haven’t a hope of doing anything to stop it gobbling up matter.

That said, it’s easy to overestimate how much power the black hole itself has to sate its appetites. It’s all too easy to imagine it as a cosmic vacuum, the plughole in the swirling vortex of the bath-tub of existence, ravenously and inexorably stripping the surrounding galaxy bare with unimaginable force.

But that’s not really true: the only force it has at its disposal is the same as the one that stopped you getting water sprayed in your face when you brushed your teeth this morning (and if you haven’t yet, you really should, look at the time!), by which of course I mean gravity.

Exactly the same forces cause the earth to careen about round the sun (and the sun to wobble back and forth in sympathy) as help black holes gobble and grow their way to the gargantuan proportions that we see at the center of galaxies, including ours. A black hole the same mass as our sun would behave almost exactly like the sun, and if someone swapped them tomorrow (I’m looking at you, North Korea) we’d barely even notice, our orbit would be exactly the same and we’d only slightly freeze to death in minutes.

Black holes are formed when the remnant of a massive star, under gravitational forces so strong that no other known force can stop them, collapses down to tiny proportions. What remains is an object so heavy and compact that, in some small region around them, even light cannot escape it’s gravitational tug (hence the “black” bit; the whole “hole” thing is just to sound dramatic).

But an object the mass of a star can only collapse to be an object, at most, the mass of a star, even if that star is hundreds of times the mass of the sun. So how come the universe is dotted with black holes many billion times the mass of the sun, and even more perplexingly, why is it that once they get this heavy, they seem to stop growing? Looking far away into the distant universe, we see black holes this heavy lurking in the center of massive galaxies, and in the nearby universe, we see, well, almost exactly the same thing. What causes something that grows so massive so quickly in the early universe to just, well, stop growing? What the hell, nature? What. The. Hell?

Well, the first bit is easy, just as you were once a twinkle in your mother’s eye, and slightly later, two gametes in your parent’s genitalia, you grew into the upstanding citizen you are today by eating. Black holes eat too; occasionally they cannibalize each other when massive galaxies merge, but mostly they just get by on a healthy diet of good wholesome gas.

They eat stars too, but not very quickly. You see, just as the earth could keep orbiting a black hole the size of the sun, stars can happily cavort around a super-massive black hole for a long, long time. There’s just not much that can slow them down. Gravity holds the stars in orbit around the black hole, but no matter how many times they go around, they’re barely losing any energy and it can take an age for them to get perceptibly closer. Imagine if your food just kept circling around you tantalizingly for a few billion years…

Gas, on the other hand, is a big mess of individual particles and molecules, and as it orbits around they collide and skitter off each other, losing energy each time, slowing their orbits and sinking closer and closer to the gaping maw of the black hole. 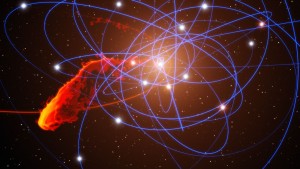 Artists impression of stars orbiting, and gas falling into, Sagittarius A, the super-massive black hole at the centre of our galaxy. Image credit: ESO

So this paper proposes a reason for why black holes seem to slow their growth just when they’re really starting to get huge. In order for these colossi to grow much further, they would have to suck in a gas at a rate equivalent to a thousand suns a year. But when you start getting quite this much gas collapsing down to such a small volume, things start to get a little hot and close. I won’t go into the fetid details (which frankly is surprising given the gametes comment), but pretty quickly stars start being born out of the inflowing material, which instead of being devoured by the black hole can pootle off on their own orbits, taking hugely longer to mosey their way down to the black hole and slowing its growth to a trickle.

Combine this with great outflows of energy belched out of the black hole as the incoming matter swirls around it in a tight, hot disk, blowing surrounding gas away and cutting off the food source, and you have one very sad, fat, old black hole, desperately harking back to the old days when it could gobble its own weight in moments (or at least millions of years). 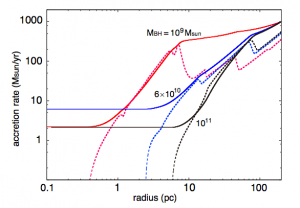 Rate at which gas is accreted (solid lines) and stars formed (dashed) at a certain radius in an accretion disk, for black holes of pretty high (red), really high (blue) and silly high (black) mass. For each at some inner radius the rate at which mass is gained drops to some small constant value, too slow to grow the black hole much past a few billion stellar masses.