Title: Astrophysical Implications of a New Dynamical Mass for the Nearby White Dwarf 40 Eridani B

About a hundred years ago, one particular star made many astronomers scratch their heads. The star in question is 40 Eridani B, which is part of triple stellar system in the Sun’s neighbourhood, only 5.0 parsec away from us. It was classified as an A-type star by Williamina Fleming, one of the women computers working at the Harvard College Observatory. Fleming devised a system to classify stars according to the relative amount of hydrogen observed in their spectra, which was later improved by Annie Jump Cannon and is the base of the system still in use. A-type in particular means that the star shows hydrogen as its most abundant element. This is usually a consequence of the star being so hot that molecules can’t stick together and metals are mostly ionised. As luminosity depends on temperature, this type of star is also very bright. 40 Eridani B, however, was too faint for a typical A star. A few years later, another faint star was also found to be of A-type: Sirius B, the companion to Sirius A, the brightest star in the sky. This suggested the existence of a new class of underluminous stars with spectra dominated by hydrogen.

You might have already guessed what they are, but it took astronomers back in the day a while to figure it out. Astronomer Willem Luyten was the first to refer to them as “white dwarfs”, back in 1922. These stars have already retired from the job of synthesising new elements, so there’s nothing to prevent gravity from acting and compressing them to a very small (about the size of Earth), extremely dense (a teaspoon of its material would weigh a tonne!) object. Unlike the typical A stars, the reason we can only detect hydrogen in their atmospheres is not their temperature, but the fact that their gravity is so strong that it pulls all the heavier elements to the core. Hence they can be dominated by hydrogen and still be faint, and the mystery of the faint star was solved.

The mystery of the core composition

As our methods of measurement improved, astronomers were able to model the orbit of the stars in the system and use Kepler’s laws to constrain their mass. In 1974, astronomer W. D. Heintz obtained a mass of 0.43 times the mass of the Sun for 40 Eridani B. At the time astronomers already knew, however, that the lowest possible mass of a white dwarf that can be formed through single-star evolution — considering the present age of the Universe — is about 0.5 times the mass of the Sun. Any star that would form white dwarfs lighter than that should still be in the main sequence, calmly burning hydrogen into helium. So assuming the mass for 40 Eridani B was correct, it would have to be a helium core white dwarf resulting from a binary-star merger. In this situation, the stars release energy when spiralling into each other, and this energy carries away material from the outer layers, allowing the formation of a lower mass white dwarf with a helium core.

A new mystery surrounding 40 Eridani B arose in 1998 when J. L. Provencal and collaborators estimated the radius of the star using parallax measurements. With the independent estimates of mass and radius for this and other stars, they proceeded to test the mass-radius relationship for white dwarfs (you can read more about it in this astrobite). They found that the combination of mass and radius of 40 Eridani B would be better explained by a core composed of a combination of magnesium and iron. So our theory of stellar evolution suggested the star had a helium core, while our theory of white dwarf structure indicated a core composed of much heavier elements.

The mystery of the heavier mass

The plot thickened in 2012 when N. Giammichele and collaborators estimated the mass of 40 Eridani B using a model atmosphere analysis. This consists of comparing the spectrum of the star to model spectra derived from atmosphere models to obtain temperature and gravity, and subsequently estimate the mass of the star adopting a theoretical mass-radius relationship. This is by far the most widely used method to estimate the mass of white dwarfs, so we expect it to be reliable. Hence astronomers were very surprised to find that this method yielded a mass of 0.59 solar masses for 40 Eridani B, inconsistent with the mass derived from the orbital analysis. Now our theory of stellar evolution seemed to be clashing with our theory of stellar atmospheres as well.

Which theories should be revised? The authors of today’s paper have the answer.

The authors were very surprised to find out that the orbit of 40 Eridani B had not been updated with new observations over the more than four decades since the work of Heintz. They contacted the binary star group at the United States Naval Observatory (USNO), which in turn assembled all the data they could find containing this star. With these new measurements, the group found a smaller orbital period, which led them to obtain a much higher mass for 40 Eridani B than Heintz: 0.573 solar masses.

This new mass agrees within uncertainties with the value derived by Giammichele and collaborators. To double check, the authors also fitted all the available spectra of 40 Eridani B to obtain the average gravity and, using radius derived from parallax measurements, calculated a new mass. They found a mass of 0.565 solar masses, which, taking the uncertainties into account, also agrees with the new value derived from the orbit. We can thus rest assured that our spectral analysis method for deriving masses indeed works! The mystery of the heavier mass is solved.

Finally, the authors compared the new independent estimates of mass and radius to theoretical mass-radius relationships. As you can see in Fig. 1, the mystery of the core composition is also solved. As the mass was revised above the limit for single-star evolution, we would expect 40 Eridani B to be a carbon-oxygen core white dwarf. Those two elements are the heaviest mosts stars can synthesise, so they form the core of most white dwarfs we know. This indeed turns out to be the case for 40 Eridani B. The only catch is that the authors have to assume a thin hydrogen atmosphere, while our modern theories of stellar evolution mostly predict white dwarfs to have thick hydrogen layers. 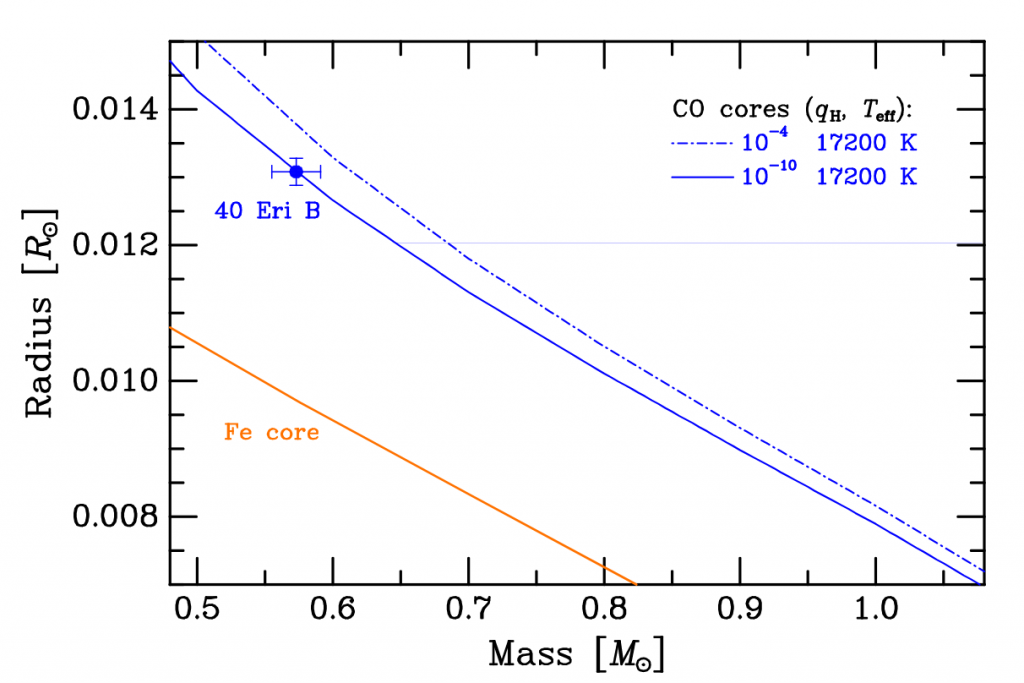 Figure 1: The position of 40 Eridani B in a mass-radius plane given the new derived values for mass and radius is marked by the blue circle. The orange line shows the mass-radius relationship for an iron core, which was needed to explain previous estimates of mass and radius, but is very far from the new ones. The blue lines show the relationship assuming a carbon-oxygen core. The dash-dot line is for a thick hydrogen atmosphere, while the solid line, which agrees better with the data, assumes a thin hydrogen atmosphere. Figure 3 in the paper.

You usually read here on Astrobites that we need more data to reach conclusions. Today’s paper is a nice example of how this actually works. Analysing more data, the authors proved that both the mass and the core composition of 40 Eridani B are well explained by our stellar evolution theory. They have also confirmed that the popular method of combining spectral analysis and theoretical mass-radius relationship to estimate stellar mass works quite well. None of those needs to be revised thus far. But luckily our work doesn’t end there: we have now to scratch our heads to figure out why the atmosphere of 40 Eridani B is thinner than our theory predicts. As often happens in science, solving one mystery ended up raising another.

The Faint Young Sun (is not a) Problem