Type Ia (pronounced “one-A”) supernovae are powerful explosions caused by a stellar remnant known as a white dwarf undergoing runaway nuclear fusion so violent that it blows the star apart. They are an important part of astronomy, as they can help astronomers estimate distances to far-away galaxies. (In fact, observations of Type Ia supernovae led to the 2011 Nobel Prize in physics for the discovery of the acceleration of the expansion of the universe.)

Type Ia supernovae are useful because we can use them as standardizable candles—objects whose inherent luminosity we can figure out based on various properties such as how long it takes for them to fade after brightening. Once we know their luminosity (how much light they actually emit) we can calculate their distance based on measuring their brightness (how much light we measure from them here on Earth) and applying the inverse-square law. Actually figuring out their luminosity requires some care, however. We think that Type Ia supernovae can happen in at least two different ways (see this bite from 2012 for an explanation), and astronomers using them for distance measurements need to make various empirical corrections in order to do so. 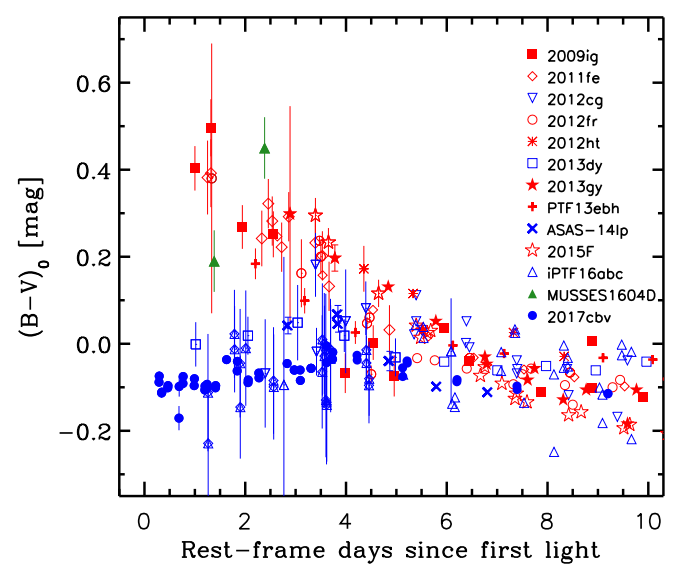 Figure 1: This plot shows the light curves of the thirteen supernovae examined in the paper. The red and blue colors show the “Red” and “Blue” populations and how their light curves diverge within the first four days since exploding. All light curves have been normalized to correct for reddening and time-dilation. (Figure 2 in the paper.)

Today’s paper offers another potential factor to consider, by looking at thirteen supernovae that were discovered very early after the initial explosion (within a few days, sooner after the explosion than most supernovae are discovered). The authors compared the light curves of the supernovae after normalizing for reddening caused by intervening dust and time-dilation caused by the expansion of the universe and found what appear to be two distinct populations. Based on their colors (in the astronomical sense of measuring the difference in brightness of their light between two standard filters) the two populations were named “Red” and “Blue.” Interestingly, after about five days the light curves of both populations were mostly indistinguishable; the difference was only seen prior to that time. 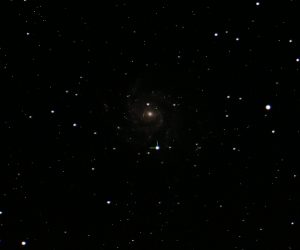 Figure 2: Supernova SN 2011fe in Messier 101 (marked by the green lines). This is one of the supernovae examined in today’s paper. (Image by the author.)

The authors present four possible explanations for why these two distinct populations may exist: interaction with a stellar companion, the presence of radioactive nickel-56 in the outer layers of the star*, interactions with the circumstellar medium (gas and dust around the star), and simple differences between the composition or opacity of the progenitor white dwarfs. They note however that none of these explanations completely explain all the evidence, so we still have more to learn about these intriguing explosions.

Part of the problem is the small number of objects to work with. Although there are hundreds of Type Ia supernovae known, most of them aren’t caught soon enough after the initial explosion to see the dichotomy found in today’s paper as it only shows up very early on. This situation should be remedied in the future, however, as more—and more sensitive—automated surveys come online which will enable us to find more supernovae sooner after their initial explosions.

*It bears noting that much of the light in the later stages of a Type Ia supernova’s lightcurve comes from the decay of large amounts of radioactive nickel-56 (and iron-56 and cobalt-56) created during the explosion. However, this nickel-56 would have been created from material deep in the interior of the white dwarf. The proposed explanation involves nickel-56 existing in the outer layers of the white dwarf very soon after the start of the explosion, perhaps from being dredged up from the center due to strong mixing or from being created by a double-degenerate merger where two white dwarfs collide and explode.