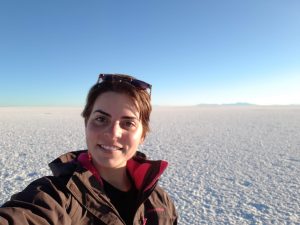 Natalia del Coco, a Masters student at the University of São Paolo, Brazil

Today’s guest Post was written from Natalia Del Coco, a Masters student at the University of São Paulo, Brazil. In her research, she is looking for correlations between the physical properties of cluster of galaxies and the cosmic web around then. Besides an astronomer, Natalia is ballerina, shower singer and backpacker.

Title: An extreme proto-cluster of luminous dusty starbursts at zspec = 4.002

The biggest structures know in the Universe are galaxy clusters (GC): they are made of hundreds or even thousands of galaxies, lots of gas and a huge amount of dark matter. But a long time ago, these giants were actually babies. Right after the Big Bang, when no galaxies, stars or even molecules were formed yet, the Universe was extremely homogeneous, although it had density fluctuations with relative amplitude of ~ 10-5. During the cosmos’ expansion, the regions that initially were slightly heavier became increasingly heavier, because mass attracts mass. Then, clumps of gas turned into stars. Due to their mutual gravitational attraction force, they gradually got closer to each other, growing into galaxies, which congregated further – also because of the gravity – into today’s GC (for a deeper understanding, read this).

Since looking at distant astronomical objects means to look into the past, we may be able to see the progenitors of the GC, the proto-clusters. They should be far from us (at high redshifts, z), comprised by dozens of galaxies forming lots of stars, therefore containing a huge amount of dust and gas (the stars’ ingredients). In other words, we should see these proto-clusters as distant aggregations of galaxies that are very bright and very red, and therefore visible only in the submillimeter/millimeter from Earth (which are the color and wavelength detected in earth frame from the gas and dust radiation of distant galaxies when heated by its stars). To observe these systems may teach us about how the Universe and its structures evolve through the cosmic time. In today’s paper, the authors report the discovery of a proto-cluster core with extreme characteristics: super dense, super massive and super old.

In the attempt to find nice proto-clusters, the authors looked for sources in the H-ATLAS survey. They chose the reddest proto-cluster like system, and baptized it as Dusty Red Core (DRC).
To find out more about DRC, they made many different observations: 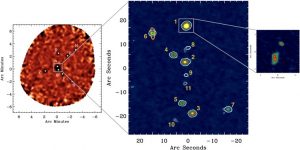 Figure 1: From left to right: wide-field of DRC (the A region) from APEX; DRC galaxies observed with ultra-deep ALMA continuum; high-resolution ALMA imaging shows details of DRC-1, composed by three star-forming clumps. Figure 1 in the paper.

All this data leads to several new findings about the DRC. Firstly, the continuum and imaging observations have shown that DRC is actually composed by 11 bright dusty galaxies instead of a single object as first thought, and DRC-1 is formed by three bright clumps.

The easiest way to find the proto-clusters’ redshift is by using the lines emitted by the molecules and atoms of the gas filling the galaxies, such as ¹²CO, H2O and CI. 10 of the 11 galaxies in DRC are at the same redshift of z = 4.002 (the final one didn’t have enough lines for the measurements). Since the expansion of the universe means that more distant objects move faster and have higher redshift, this can be converted to a distance of ~117 billion light years far from us (in luminosity distance) and were formed only 1.512 billion years after the Big Bang. The authors also find that the components are concentrated into an area of 260 kpc × 310 kpc (see parsec). It may seem an enormous area, but for astronomy, it means this is an extreme over-dense region. Knowing that, it is safe to say that at least 10 objects of DRC are members of a proto-cluster core in the initial evolutionary states of the Universe.

The continuum observations are also useful to calculate how much gas and dust mass is converted into stars per year (the Star Formation Rate, SFR). The lower limit value obtained was 6500 solar masses per year, being the highest found until now. Furthermore, the molecular gas and total mass were estimated. For the primer, they utilized the CI emission lines, achieving a minimal value of 6.6 × 1011 times the solar mass. The second one was calculated in three different manners, reaching up to 4.4 × 1013 times the solar mass (for comparison, the estimated mass of the Local Group is ~2 × 1012 times the solar mass). Based on these results and cosmological simulations, the authors concluded that DRC may evolve to a massive GC in today’s Universe, such as the Coma Cluster.

That kind of object is a key for us to know a remote part of the Universe’s history. Moreover, DRC may help us to infer about the unknown parts of the universe – which is huge, since the Dark sector corresponds to 95% of the Cosmos. The GC analysed in this paper is bright and massive, and was measured with accuracy by modern telescopes, despite its enormous distance from us. Those measurements may be used as parameters to test different cosmological theories, thus helping us to understand the Universe’s big picture.