It was in the White Mountains where Prof James Lowenthal first saw Starlink. He was out training undergraduate students to lead stargazing sessions when a string of dozens of lights shot across the New Hampshire night sky. “It was deeply impressive, almost beautiful… but it was also a watershed moment and I felt the night sky would never be the same again”. 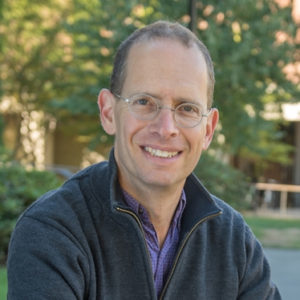 The launch of Starlink angered astronomers around the world and began a conversation about humanity’s relationship with the heavens. Prof Lowenthal is a loud voice in that conversation as an optical astronomer, member of the AAS committee on Light Pollution, Radio Interference and Space Debris and a passionate defender of the night sky. We sat down to discuss his plenary talk with Prof Sandra Cruz-Pol, his work defending dark skies and his wider research interests.

“We had no idea what was coming…“

On 23rd May 2019, SpaceX launched 60 satellites into low Earth orbit (LEO). This was the first phase of the Starlink constellation, whose primary aim is widening the availability of internet access to underserved areas of the globe. Since then there have been many subsequent launches to expand the constellation. At the time of writing, Starlink consists of over 400 satellites, with many future launches planned. All of the satellites launched to date are visible to the naked eye. The astronomical community had heard endless rumblings about the advent of LEO satellite constellations, such as Starlink, but Lowenthal remarks that “we had no idea what was coming, we completely underestimated the brightness“.

As a member of the AAS committee on Light Pollution, Radio Interference and Space Debris, Prof Lowenthal will present the findings of a white paper he helped write outlining the problems associated with unleashing vast constellations of new lights in the sky. Lowenthal concludes that it has “two families of consequences”. The first family affects all of humanity who have “enjoyed and been inspired by [the night sky] and used it for storytelling, navigation, our calendar system, everything. It’s an integral part of our cultural heritage that needs to be protected“. The benefits are not limited to humans; countless animals depend on a clear night sky. He highlights that “80% of migratory birds use the stars, to some extent, in order to migrate“. Allowing these satellites to continue launching unchecked puts all this at risk.

The second family of consequences affects professional astronomy. Lowenthal explains that “astronomers are used to dodging these bullets … a typical observing campaign may have 1 out of every 100 images ruined by a satellite … but you just chuck it, it’s only 1%“. However, with the rise of LEO satellite constellations, this problem will be exacerbated. In the year since Starlink launched, “it has more than doubled the number of satellites visible to the naked eye, and it is going to multiply by a factor of nine“.

Scientists are scrambling to assess how these constellations could affect future missions. Of immediate concern is the Vera Rubin Observatory. Expected to see first light later in 2020, its aim is to image the entire southern sky every few nights, however it could be severely affected by Starlink. “We are talking about tens of satellites at once, at any moment, during many hours of the night … across your field of view. It’s a terrible collision of technologies” Lowenthal explains.

Alongside these efforts, the AAS and the National Academy of Sciences have been involved in numerous conversations with senior employees of SpaceX, including CEO Elon Musk, about ways to diminish the reflectivity of future satellites. Lowenthal notes that “Elon Musk has promised to make future satellites invisible to naked eye” and that “he might be able to make good on that promise“. However, Amazon, Facebook and Samsung are also considering launching their own constellations, so the promises of one CEO won’t save the skies. Lowenthal highlighted the lack of international agreement governing the optical part of the spectrum, especially in comparison to the radio. He is calling for “an international conversation that brings stakeholders together” to discuss the future of the night sky.

When not defending dark skies, Prof Lowenthal teaches and researches Astronomy at Smith College in Massachusetts. Currently he is studying a population of distant, dusty galaxies with some of the most extreme star-formation rates ever observed. These sub-millimetre galaxies, invisible at optical wavelengths due to the sheer mass of dust surrounding them, were found to be producing tens-of-thousands of stars per year. Most of the galaxies were only discovered because they coincided with some of the largest gravitational lenses ever found. Lowenthal says “we have this incredible opportunity … using these lenses we can figure out how [these galaxies] work and what makes them such spectacular starbursts. … However, the caveat is the gravitational lensing scrambles the image … and in order to unscramble it … we need a good model of the lens… and that’s what we’re doing right now“.

When asked about what advice he would give to students considering a career in academia, he was very matter of fact. Graduate school can take anywhere between 3 – 5 years of your life, maybe more, depending on where you study. It is characterised by long days and endless hours at a computer processing data. Bluntly, Lowenthal says “there’s no point going to graduate school if you know you won’t like it“. Being a post-doctoral student isn’t any easier. Moving from one short contract to another, likely requiring you move between cities or even countries.  He advises that you “keep doing what you like for as long as you can” because academia can be a very stressful environment so “if it ain’t fun, why bother?“.

If you want to find out more about the challenges that LEO satellite constellations pose to modern astronomy, check out the joint #AAS236 talk by Profs James Lowenthal and Sandra Cruz-Pol on Tuesday 2nd June at 12:40 pm (EDT).