Hunting for Tatooine: TESS discovers its first planet around a binary star system 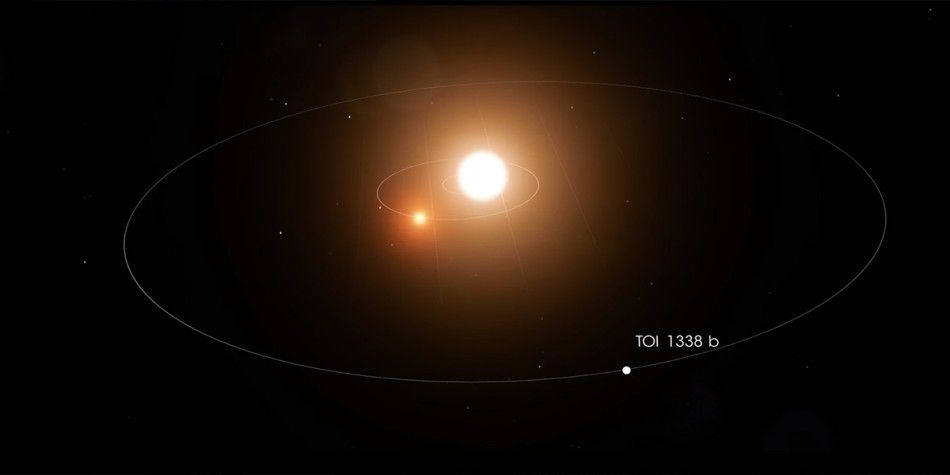 Two suns above the horizon. This iconic scene captured the imagination of millions in the very first Star Wars movie in 1977. It introduced us to Tatooine, home of Luke Skywalker and the origin of his great adventure to save the galaxy.

But for a long time, such a wild planetary system was considered to be pure fiction. At the time, nobody even knew if there are any planets at all beyond our own solar system. But a planet around a double star system? That’s a textbook three-body problem! Everything is tugged and pulled on by multiple and complex forces, so that the motion of the involved bodies is almost completely unpredictable, even if we know their exact location just an instant before. This implies a highly unstable orbit, with one of the bodies eventually shooting out into deep space, or crashing into one of the stars. No way the planet could be habitable, tumbling between freezing cold and rock-melting heat in its short and chaotic life.

Less than thirty years later, our preconceptions about planets and where they could form were finally and rapidly shaken to the core.

THE SEARCH FOR THE TWIN SUNSET

Shortly after the discovery of the first planet outside our solar system in 1992, the very first planet orbiting two stars, a circumbinary planet (CBP), was confirmed in 2000. It orbits around a pulsar and a white dwarf, two stellar corpses. Other surveys utilizing different methods have since been conducted, searching for CBPs.

With the launch of the Kepler mission in 2009, this category of planets was further expanded and diversified. The mission discovered, among others, a CBP within the habitable zone and even a planet located in a quadruple star system! In total, 11 binary star systems observed by Kepler turned out to host at least one planet.

Now, NASA’s TESS (Transiting Exoplanet Survey Satellite) mission is carrying on Kepler’s legacy as a broad transiting planet search effort, scanning the stars for an ever so slight drop in their flux, caused by a planet crossing the projected stellar surface.

THE HUNT GOES ON…

In early 2020, the first planet around a binary star system found by TESS was announced. This newly found planet (called TOI – 1338 b) is around the size of Saturn and finishes a lap around its two host stars in approximately 95 days (see Figure 1 for a schematic overview).

The stellar system itself has already been known before TESS was ever launched. It also goes by the catchy name EBLM J0608-59 and is an eclipsing binary system made up of a sun-like G star with 1.3 solar radii and a cooler M dwarf star with 0.3 solar radii.

Exoplanet researchers first became interested in TOI – 1338 after it caught the eye of a NASA intern, due to a temporary drop in flux within the light curves of the star (like the ones seen in Figure 2 in the upper panel, where there are multiple short drops coming from the secondary star), which was of similar depth to a ‘secondary eclipse’. During this event, the smaller star moves in front of the larger one and thus its contribution to the overall brightness of the system is blocked. But according to the calculations, it was happening at the wrong time. A second and third observation of this drop, shown in Figure 2, then confirmed it to be a real feature. It was also noted that the transit durations varied (~ 7.2 hours, ~ 14.4 hours and ~ 9.6 hours, respectively), which is a classic indication for CBPs. Usually, a transit by the same planet around a single star should last the exact same amount of time for each event, but because there are now two dynamic stars involved, the size of the bright surface the planet covers is dependent on the current position of the stars in their respective orbits.

To infer the planetary parameters (like radius, orbital period, etc.), the information provided by the TESS light curves and by spectroscopy, which measured the ‘wobble’ speed of the primary star, was evaluated. The smaller star’s presence causes the G star to travel at around 3.6 km/s around the common center of mass, while the stars orbit each other in roughly 15 days. The stellar masses being known, the planetary mass was constrained to 33.0 +/- 22.0 Earth masses. Technically, the planet causes an additional contribution to the radial velocity of the primary star, but it is too low to be picked up precisely by the instruments. Thus, the mass can only be roughly estimated. With a radius obtained from the transit depth of 6.85 +/- 0.19 Earth radii, the planet can be broadly classified as Saturn-like. So, this particular find most likely resembles a gas giant more than the deserts of Tatooine.

A CBP is not as orbitally stable as a planet located around a single star, due to the three-body problem, as briefly touched upon in the introduction. Studies suggest there is a critical period, below which planets around binary star systems become unstable and will eventually scatter onto an unbound orbit, sometimes colliding with one of the stars. Running sophisticated bayesian statistics, the authors show that the distances between the bodies in TOI – 1338 have been rather stable during the last 40,000 years. This is great news for the planet, indicating it will not be thrown out or swallowed any time soon.

Tatooine and the double shadows cast by its inhabitants still remains a great example of imaginative and beautiful story telling. Yet, although it is hard to say whether there is an exact duplicate of the Skywalker’s homeworld out there, we are confident today that a twin sunset is definitely not a purely fictional and outrageous idea anymore.

I'm a second year PhD student at the LMU Munich, working for the University Observatory (USM), which owns the 2.1m Fraunhofer Telescope Wendelstein. My field of research is exoplanets. I hunt for traces of them in data from big surveys, like the TESS mission and then follow them up, using spectroscopy and photometry. Mainly, I focus on long period planets that may potentially harbor life. When I'm not planet hunting, I act as a DM for several Dungeons and Dragons groups and annoy people with facts from Tolkien's Silmarillion. I enjoy kickboxing and learning about ancient human history.