A Magnetic Map of the Silent Sun

Title: Mapping the Hidden Magnetic Field of the Quiet Sun

The Solar Cycle sees our Sun alternate between phases of tempest and tranquility driven by its magnetic field roughly every 11 years. It has been difficult to measure the magnetic strength when the Sun goes silent – until now.

A recent breakthrough by astronomers at the Institute of Astrophysics in the Canary Islands (IAC) in Spain promises to help us make more accurate models for predicting future solar storms.

“(We knew that) most of the Sun’s magnetic energy is supposed to be hidden in a very small, tangled magnetic field. Until now, no one could map this hidden field,” says Maria Martinez Gonzalez, a postdoctoral researcher at IAC on what drew her to this challenge.

Powered by twisting and curling magnetic forces at its surface, the Sun exhibits dynamic phenomena such as sunspots, giant solar flares, and coronal mass ejections. The latter can see billions of tons of plasma (hot, ionized gas) ejected at speeds up to a million miles per hour from the Sun’s outer atmosphere, also known as the corona.

A solar storm of high intensity aimed towards the Earth by chance can threaten catastrophic damage to our telecommunication systems.

That is why it is crucial to make maps and models of the Sun’s magnetic field that fuels these storms. The strongest fields can be measured through observations of sunspots and other surface activity which is frequent at peak of the 11-year solar cycle, or the solar maxima. But over the past few years, the Sun has been at solar minima, the opposite end of this cycle. This so-called ‘Quiet Sun’ devoid of sunspots and surface activity presented an avenue to study its weaker magnetic fields.

Gonzalez and her team studied images from the GREGOR Solar Telescope, also located in the Canary Islands. Light emitted from hot, magnetized plasma on the Sun’s surface has a specific polarization, namely the direction in which electromagnetic waves oscillate. As sunlight passes through magnetic fields, its polarization changes. Applying a computational technique called ‘multiline inversions’ on the polarized light images, the astronomers were able to obtain a high-resolution map of the magnetic field of the quiet Sun.

Their map published in the Astrophysical Journal spans an area roughly 112 times that of the contiguous United States. Albeit tiny compared to the entire surface of the Sun, it is nevertheless an important first step. On average, the researchers found the magnetic field of the quiet Sun to be 46 Gauss, which is very weak and comparable to that of a refrigerator magnet.

But a striking outcome of the map is that the magnetic field has strong variations, which closely match the structure of solar granules: irregular Texas-sized features on the Sun’s surface representing convective plasma cells (Figure 1). From afar, this looks like yellow frosted glass. 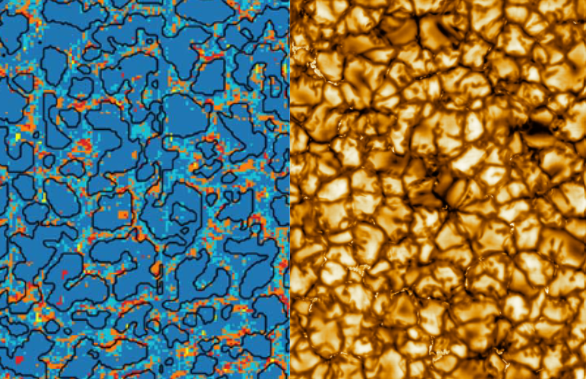 Granules representing plasma convective cells on the Sun’s surface in the model (left) and an image (right). Each individual granule is roughly the size of Texas. Modified from Figure 5 in the paper.

As expected, the field is stronger along granule boundaries, where plasma seeps into and rises up to the surface. But the researchers were surprised to find that the region inside the granules was completely devoid of magnetic fields. “The most difficult part of all this work was to convince myself that we were indeed measuring the true field strength of the hidden fields,” says Gonzalez.

This fact is exciting to astronomers, because it may provide clues to a well-known mystery surrounding the Sun’s corona: while the temperature at the Sun’s surface is around 5000 degrees Celsius, it shoots up to more than a whopping million degrees in the corona just outside it!

According to Gonzalez, the concentration of weak hidden fields in small regions can enable up to 20 percent of them to rise to the solar corona. Here, they may interact with oppositely directed fields, thereby dispersing heat in a process called ‘magnetic reconnection’.  Her team is now focused on testing this hypothesis by extending their map of the hidden field to other areas of the Sun’s surface, and also tracking it over time as the Sun wakes up to roar towards a new solar maximum.

From providing a refined scale for solar magnetism models to giving new directions to solar corona physics, this new map lets us explore uncharted fields within our host star like never before.