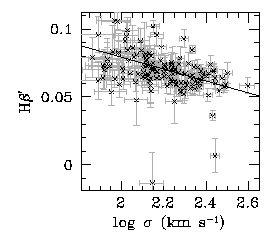 The general picture of galaxy formation was hashed out in the 1960s and 70s: clouds of gas collapse under the gravitational potential of primordial over-densities (clumps) of dark matter. It was first suggested that this collapse happens “monolithically,” then proposed that the collapse is “hierarchical.” Monolithically means rapidly and in isolation (e.g. the famous “ELS” paper), hierarchically means that many smaller protogalaxies merge together to form one massive one (e.g. Searle and Zinn 1978). In the decades since, countless lines of theoretical and observational evidence have suggested additional mechanisms which can influence the evolution of galaxies, and sorting out which of these are the most important is among the most lively fields in astrophysics.

In their new work, Harrison et al. specifically address whether an early-type galaxy’s mass or various aspects of its surrounding environment has more to do with how it’s stellar population turns out. “Early-type” refers to galaxies classified on the left end of the Hubble tuning fork diagram, and essentially refers to elliptical galaxies as opposed to spirals. They have made observations of 416 galaxies in four different clusters at z=0.04 (

lightyears away), including 87 galaxies in the outskirts of the clusters where the environment is very different than in the dense centers. In the more dense environments, you might expect more frequent mergers, but also processes such as ram pressure stripping where the hot-intracluster medium may blow gas out of a galaxy.

For each galaxy, they made measurements of the spectroscopic properties of ten absorption lines which are especially relevent to galactic chemical evolution (A.K.A. Lick indexes). By comparing these fluxes to models, they can estimate the average age, [Z/H] (total metallicity), and [

Fe] (ratio of elements produced by core collapse vs. Type 1a supernovae) of the stars in each galaxy. From each spectrum, they also estimated the velocity dispersion, which is the typical speed of stars in the galaxy and reflects the galaxy’s mass.

The meat of the problem comes in analyzing this data; looking for correlations that indicate qualitative lessons in galactic evolution. The authors wade through issues related to non-obvious trends in the data, sub-populations in their sample, intrinsic scatter, and discrepencies with previously published results in the literature. Remarkably, their results seem to be consistent across all four of the clusters they sampled, even though they were chosen as representatives of different cluster morphologies and metallicities. They therefore suggest that the mass of a galaxy is more important to its evolution than its environment, although they discuss a variety of effects of the environment as well. For instance. they find that galaxies in the outskirts of clusters are more likely to have recently formed stars. They conclude that their findings are consistent with a model where galaxies form in a burst of heirarchical merging, then evolve passively without much further external interaction (“revised monolithic collapse”).

This is a good place to note that, in addition to all of the choices astronomers must make in how to best collect and reduce their data, they must also carefully apply rigorous statistical techniques to properly draw conclusions when correlations are not be obvious. Of course, which statistical techniques are considered appropriate is constantly evolving.