This past February, I had the opportunity to travel to Mars – or just about as close as you can get on Earth. I was privileged to be a part of the all-student Crew 99 of the Mars Desert Research Station (MDRS), which did work on astrobiology, mission planning, and astronomy engineering. 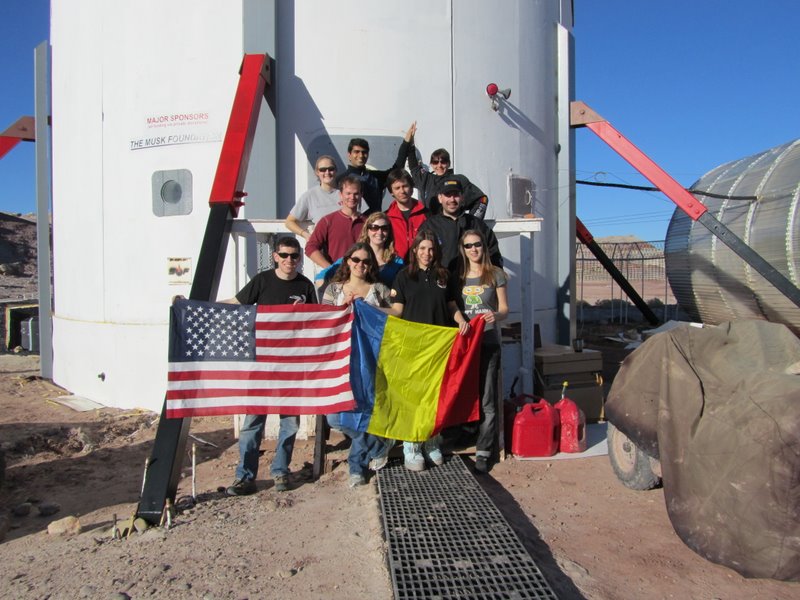 MDRS is an analog Mars facility in the Utah desert, built, owned, and operated by the Mars Society (purpose: “to explore and settle the planet Mars”). The objective of the facility is to simulate living and working on Mars, so we can encounter, overcome, and learn to manage as many problems as we can before actual landings and exploration commence. During the January-April field season, crews of 6 head to MDRS for 2-week rotations. In addition to the general Mars exploration objectives associated with MDRS, each crew also brings with it a slate of scientific research objectives, often related to astrobiology or exploration engineering.

Our crew was built around our astrobiology experiment: project LAMBDA. LAMBDA was an extension of our summer 2010 group project as part of the NASA Ames Academy for Space Exploration. LAMBDA was inspired by a couple of papers (Abrevaya et al 2010, Miller and Oremland 2008) which explored a new way to detect life: microbial fuel cells (MFCs). The idea goes as follows: all known life metabolizes, and in particular metabolizes via redox biochemistry. Microbial fuel cells use these redox reactions to generate electricity. Redox reactions in the anode chamber generate free electrons. Electronegativity differences between the anode and cathode cause electrons to be taken up by the electrodes and flow from the anode to the cathode, generating current. A proton-permeable membrane connects the anode and cathode chamber, allowing positive charge to pass between them to maintain charge balance. Microbial fuel cells are being developed for a wide range of applications, including power generation at wastewater treatment plants.

This approach comes with one huge caveat: it assumes that the sterilization process does not change the redox chemistry of the soil. This assumption will need to be validated with each soil sample and sterilization technique. If it works, however, it gives us a brand-new way to search for life, both on this world (extremophiles) and others, such as Mars and Europa. Particularly excitingly, this approach is sensitive to non-carbon based forms of life. So long as it metabolizes by redox biochemistry, this technique is sensitive to it.

Project LAMBDA was the attempt to extend the work done by Abrevaya et al by creating a field-usable apparatus and using it to search for the presence of life for samples in the field. Our goal was to perform the experiment described above: go out, collect a sample, sterilize half of it, see what the output from each sample was, and see if the technique gave us the right answer. Our preliminary results are positive, so we’re pretty excited! Follow-up work is now in progress to validate the finding.

In addition to LAMBDA, each of us had an individual project. Kevin, our chief engineer, kept the Habitation Module (Hab) running. I was astronomer and journalist, tasked with helping restore Musk observatory to functionality and assisting with the outreach portion of our project. Our Health and Safety Officer, Andie, ran a project testing software astronauts can use to plan EVAs (extravehicular activity, aka playing outside the spaceship). Our executive officer (XO) and geologist Heidi tested techniques to geologically characterize sites to use for tunnels for radiation shelter on Mars. A third project, lead by our inestimable commander Donna, looked at the genetic diversity of endoliths (rock-dwelling organisms) in the area, across different locations and geologic types. As an astronomer, I was very excited by Max’s GreenCube 3, which is developing an “artificial star” for observers! The idea is to loft a spectrally flat source high into the atmosphere via a high altitude balloon, which you can then use to calibrate out atmospheric absorption effects. GreenCube aims to improve the fidelity of supernovae observations for cosmology. We did a balloon flight and observation of the latest iteration of this design. As someone who hopes to work in precision planetary spectroscopy, I found this experiment very exciting. In addition, we participated in food and health studies. 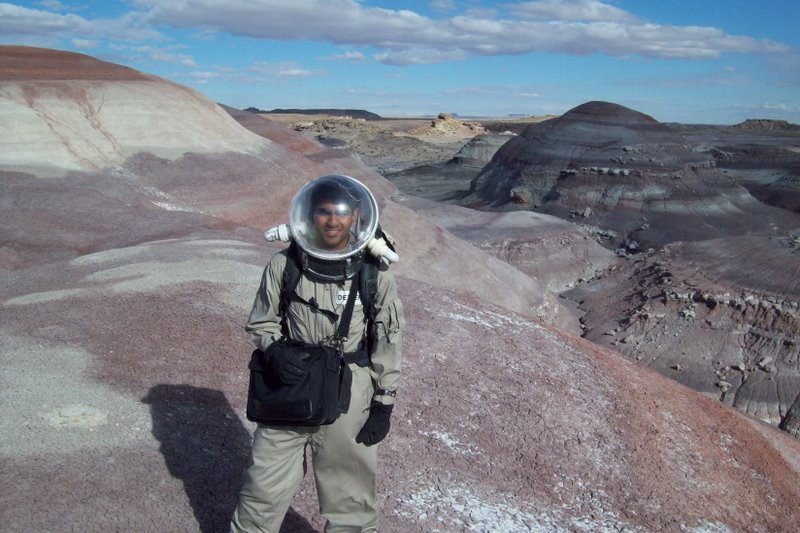 It was exciting to work on this science, and it was especially exciting to do it on Mars! For a group of space geeks, the Mars simulation was awesome.

First, the setting: MDRS consists of the habitation module (the Hab), a greenhouse (the GreenHab), engineering maintenance facilities, and Musk Observatory. When simulation commences, you have to put on a spacesuit to leave the hab, and there’s a 5-minute pressurize/depressurize cycle if you want to get in or out. Real-time communication is forbidden, so we quickly fell into our own little world with it’s own rhythms. In the morning and in the afternoon, we split up into hab and EVA teams. The hab teams did work at base, while the EVAs took off to map the area and collect samples. EVAs on our rovers (ATVs) were extremely popular; any rover EVA could be expected to have a full slate of volunteers. A number of exciting expeditions were launched; our progress could be tracked by our commander’s blood preassure. At night, if clear, Max and I headed to the observatory to see if we couldn’t just make the darn thing work. Our system’s proclivity to switch into foreign languages was a challenge. Hey guys, who reads Greek? 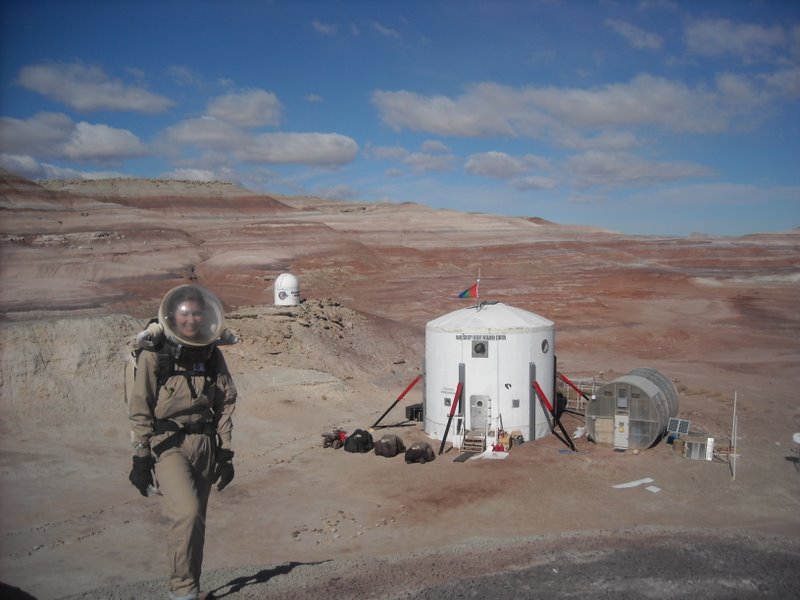 MDRS. The hab is in the foreground, with the GreenHab next to it and Musk Observatory in the background. 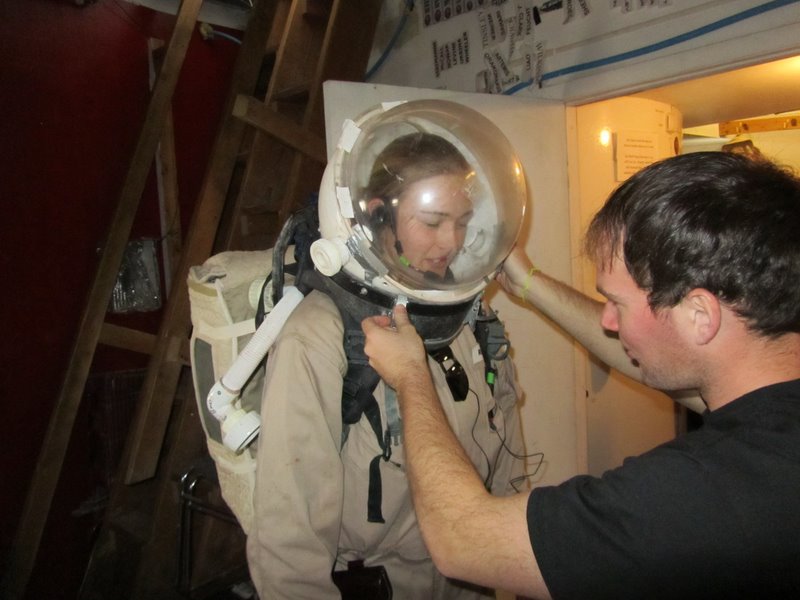 Heidi, our Executive Office (XO) and Chief Geologist, suiting up for EVA 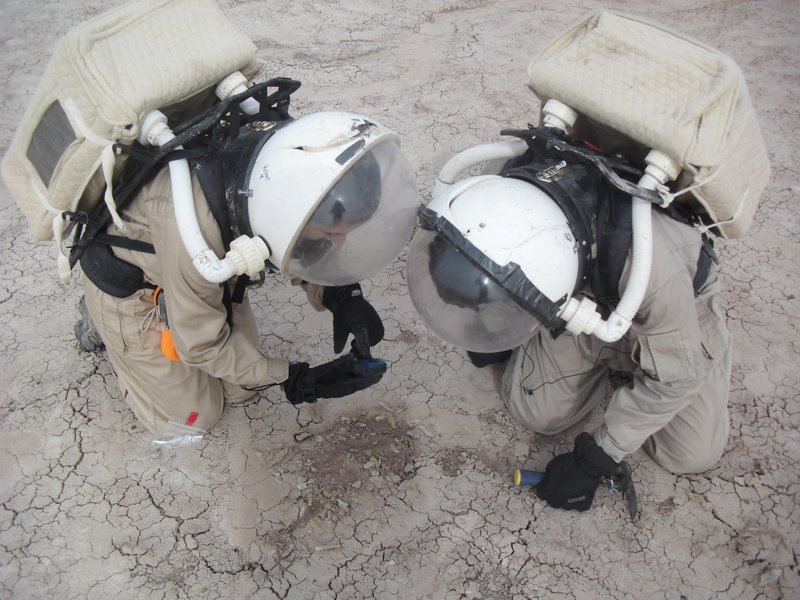 We took breakfast independently, but cooked and ate lunch and dinner together. Cooking was tons of fun, and involved a great deal of rehydrated food. As part of the food study we were doing, we alternated ready-to-eat rehydrated meals with “cooking days”, where we took all the non-perishable ingredients we had available to us and experimented with what we could make. 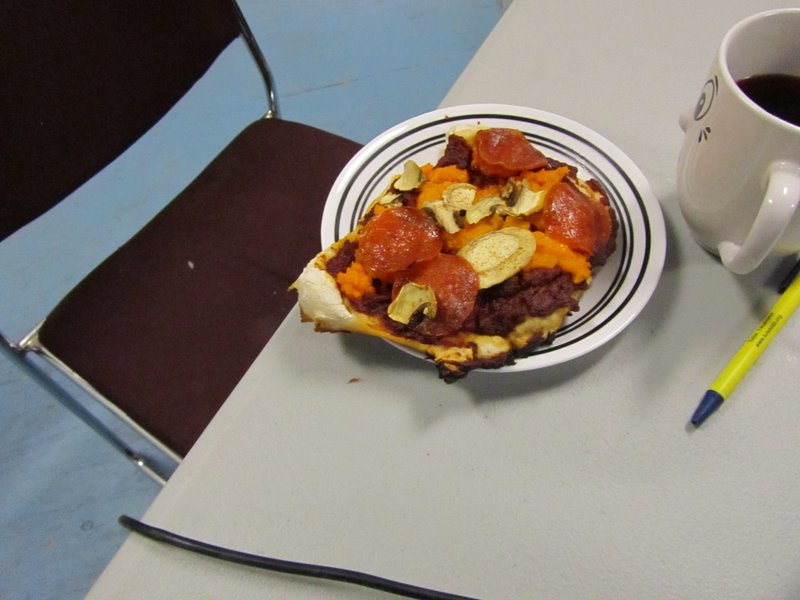 One of our less successful cooking attempts. Turns out that rehydrated "powdered cheese blend" is not good for pizza.

For a group of self-confessed novice cooks, we did pretty good! We became very proficient with the bread maker, and our rehydrated interpretations of chocolate cake, walnut-and-banana-bit pancakes, and homemade pasta sauce were absolutely delicious! The rehydrated ready-eat meals were also surprisingly delicious – they definitely beat my dorm food, and several of us began discussing how to obtain them for use at home. Our star achievement, however, had to be our Super Bowl Sunday festivities. Our football enthusiasts Macguyvered chips and dip out of an ungodly medley of rehydrated and packaged ingredients, and it was actually pretty good! Unable to watch the game, we decided to have our own game: we played Scientists vs. Engineers football – in space suits! As a theorist, I am proud to say the scientists won, under the quite reasonable definition that the goal is to score the fewest points. 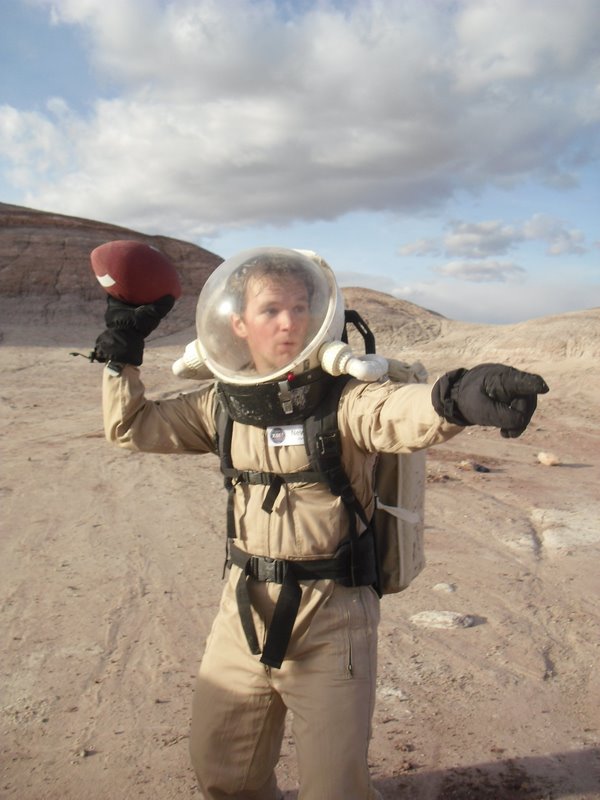 Other amusing incidents included “first contact”: a group of locals showed up one day at our doorstep. Our commander’s delicate attempts at communication were badly derailed when one of them began to explain how the existence of the pyramids was proof of past alien occupation of Earth, since humans couldn’t possibly have built them. This hit a nerve with one of our engineers, who proceeded to have a very spirited conversation with them. Eventually the rest drove off, bored, and their compatriot followed. The balloon flight of GreenCube 3 was also exciting. The balloon was attached to a rover. However, it couldn’t be pulled behind it because the shocks to the line might deflate it (we were using a sensitive trigger deflation system). So when we wanted to move the balloon location, one of us had to drive the rover very, very slowly, while another of us jogged alongside holding the balloon tether, insulating it from shocks and maintaining constant tension. I can’t help but think how we must have looked like the world’s oddest children, holding a giant balloon while jogging in spacesuits! 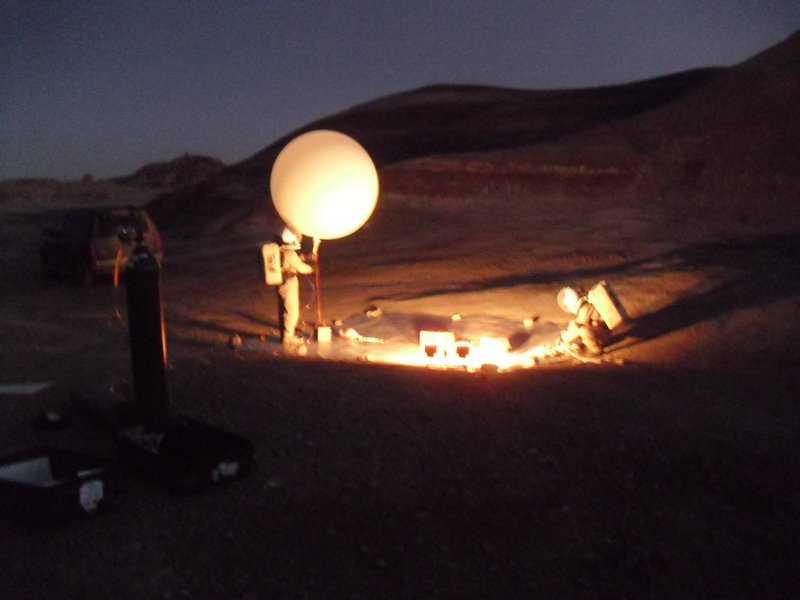 MDRS was an outstanding experience, but there’s no doubt that by the end of it, there was a few things we were missing. The first thing we did upon being relieved by Crew 100 was head over to Stan’s Burger Shack (known world-round courtesy of MDRS!), where we munched on big juicy burgers, crisp, non-rehydrated fries, and tall shakes, while some of us reacquainted ourselves with the miracle of civilization known as “flush toilets”. Still, when all was said and done, we had an amazing time, and we’re already looking at going back. Next step: FMARS! 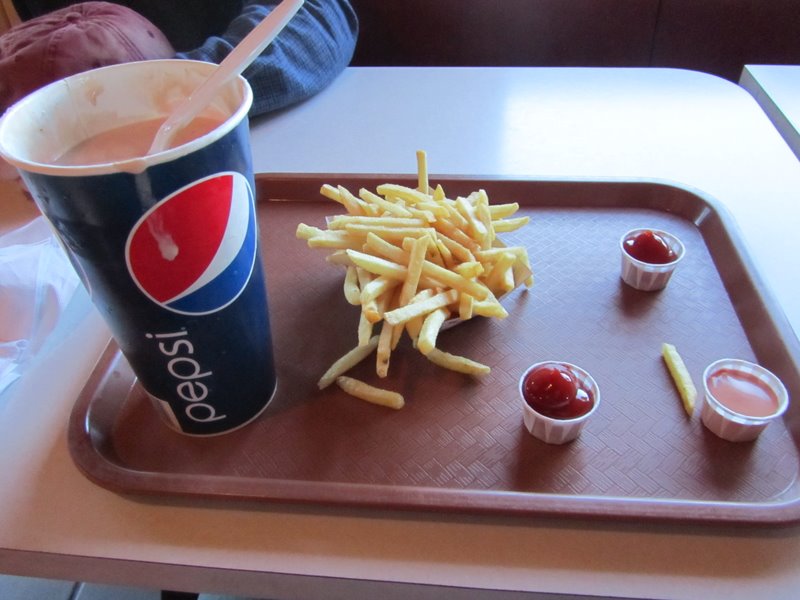