The 30 Doradus star forming region, located 50 kpc away in the Large Magellanic Cloud, is home to the closest super star cluster, R136.  Containing about 2400 OB stars, the star cluster emits about 80 million times more radiation than the sun, with a large fraction of the radiative power coming out as ionizing photons. The star cluster has carved out a bubble of ionized gas, the HII region NGC 2070, and is associated with several supernova remnants, the product of previous generations of massive star formation.

While much is known about the properties of the massive stars in the region, relatively little is known about the low-mass pre-main-sequence population.  Assuming the IMF is well-sampled, the vast majority of the stellar mass should in fact be associated with stars about as massive as the sun.  Although these stars should be numerous, they are hard to see directly as they are intrinsically faint and relatively distant. Fortunately, the Hubble Space Telescope recently received an upgrade, making it capable of carrying out the necessary observations. 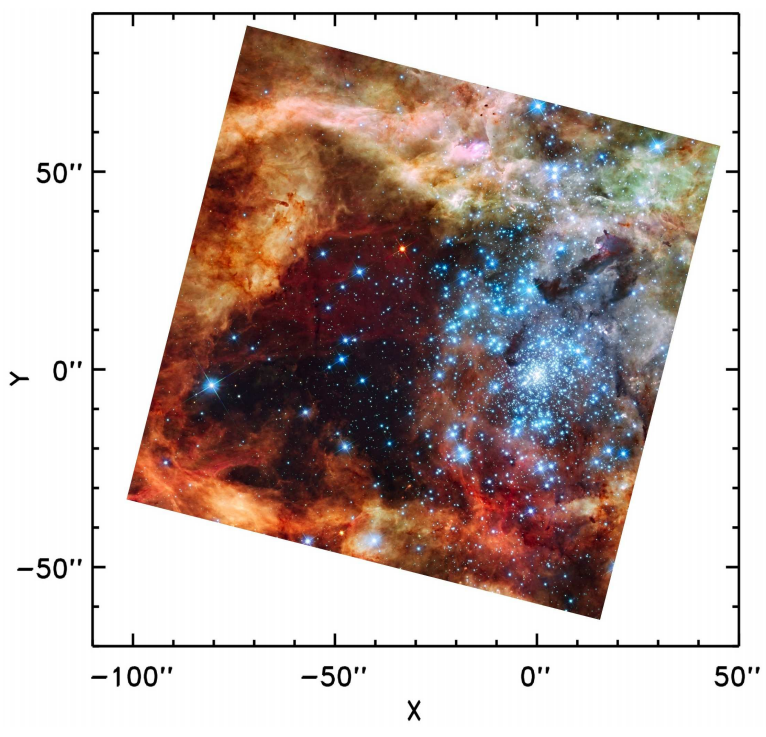 A WFC3 visible image of the 30 Doradus star forming region.

The Wide Field Camera 3 (WFC3) is Hubble’s new panchromatic camera.  WFC3 can do accurate photometry at high spatial resolution over a large field of view and is very sensitive in the near UV and IR.  This paper focuses on observations in three visual passbands, V-band (centered at 550 nm), I-band (centered at 880 nm), and a narrow-band filter centered on the Hα line.  The authors identify all the stars that occur in all three images and that are uncontaminated from background emission in the Hα image.  Using SExtractor, the authors obtain aperture photometry for all of the sources they select and, using these data, construct the deepest color magnitude diagram available for the 30 Doradus region. 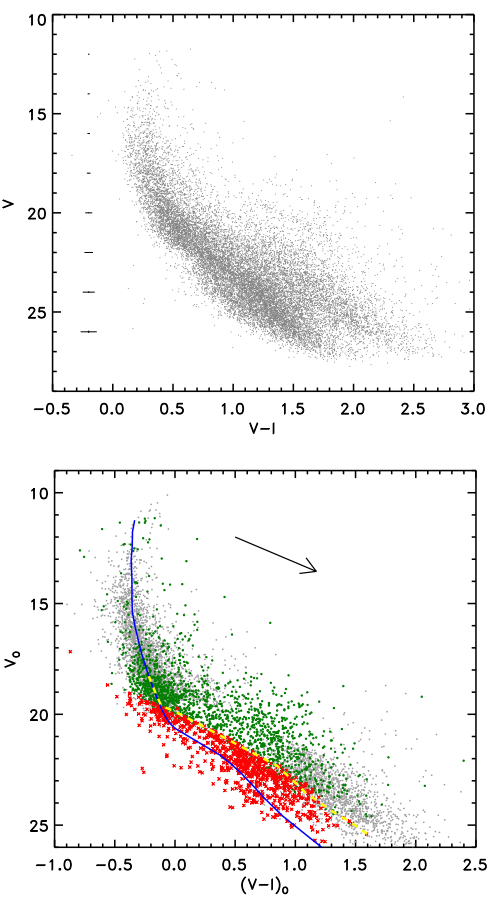 Top: The uncorrected color-magnitude diagram for the 30 Doradus field. Bottom: The CMD after correcting for extinction. The green and points are associated with excess Hα emission, characteristic of young stars.

Several features are apparent in the Color Magnitude Diagram (CMD) (top, right). First, the brightest stars, (V < 19), have a large amount of scatter in V-I color, indicating there is a significant amount of differential extinction towards 30 Dor.  This is unsurprising, as high-extinction foreground clouds are readily apparent in the Hubble image of the region. The intrinsically dim stars in the lower half of the color magnitude diagram appear to separate into two populations, a main sequence, and a cloud of objects above the main sequence.  The authors interpret that these stars have not yet reached the main sequence. Both middle aged and older stars also seem to be located in the field since both main sequence and evolved low-mass stars are detected. If you look closely, you’ll see the red clump of a 2 billion year old star population made up of red giant stars between V = 19 and 22, and V – I = 1.2 and 2.0.

The extinctions towards the brightest stars in the image can be accurately estimated by assuming the stars have colors and luminosities consistent with a few million year old stellar population that has been reddened somewhat.  This inference is made possible by the high accuracy of the color and magnitude measurements for these sources.  Uncertainties in the colors of fainter stars prevents this analysis, so the authors estimate the differential reddening across the field by matching the reddening to any given low mass star to the reddening of the closest bright stars with measured reddening. The resulting extinction corrected color-magnitude diagram is to the right.

Next, the authors use the Hα image to identify pre-main-sequence stars.  Strong Hα emission is characteristic of actively accreting pre-main-sequence stars (otherwise known as T-Tauri stars).  The authors select a sample of around 1000 stars with Hα excess detected at the 4σ level.  These are the green and red points in the color magnitude diagram.  Interestingly, a large fraction of these pre-main-sequence stars lie well above, just above, and just about on the main sequence.  This implies a fraction of the young stellar population formed in excess of ten million years ago.  The authors also find that there are relatively few old Hα emitters close to the central star cluster and speculate that disk photoevaporation by the central star cluster is responsible.