Oh Be A Fine Girl, Kiss Me. Less Tongue, Yo.

Today we will be discussing an exciting discovery – the first observations of an entirely new spectral class of stellar objects! Stars are defined to be massive enough to compress and burn hydrogen in their core, requiring a minimum mass of about 10% of the the mass of the sun. However, if our understanding of the star formation process is correct, there must also be a huge number of substellar objects, known as brown dwarfs, that form by the same processes as low mass stars, yet are not massive enough to sustain fusion in their cores. Since they don’t fuse hydrogen, they only emit radiation as they slowly cool over billions of years, making them intrinsically dim. The first brown dwarf was identified in the late 1980s, and since then hundreds of brown dwarfs have been discovered in the solar neighborhood. 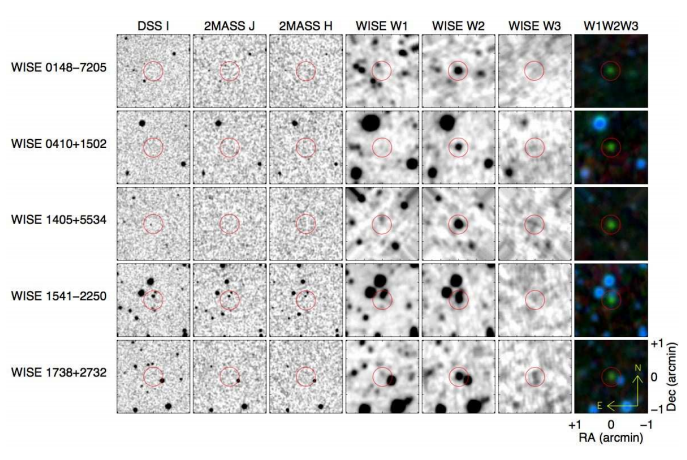 Brown dwarfs are in some sense scaled up versions of giant planets. Their atmospheres in particular should look more or less the same as massive extrasolar planets with similar effective temperatures. Observing brown dwarfs thus allows a close look at the atmosphere of a giant planet analogue, allowing a better understanding of the cool giant planets we will be directly observing in the next few years with high contrast imaging instruments like the Gemini Planet Imager.

Luckily, the Wide-Field Infrared Survey Explorer (WISE) satellite recently completed an all-sky survey uniquely capable of detecting the coolest brown dwarfs. WISE is an infrared telescope that observed the whole sky in four wavelength bands at 3.4 (W1 band), 4.6 (W2), 12 (W3), and 22 (W4) microns. The W1 and W2 bands in particular were carefully chosen to sample the deep infrared absorption band of methane at 3.3 microns, and the region of relatively low opacity in brown dwarf atmospheres at 4.7 microns. A brown dwarf observed in these two bands will thus appear extremely red – it’s brightness in the W2 band will be much, much higher than in the W1 band. In these two wavelength bands, brown dwarfs are actually just about the reddest objects in the universe, meaning that they can be easily separated out in a color-color diagram. 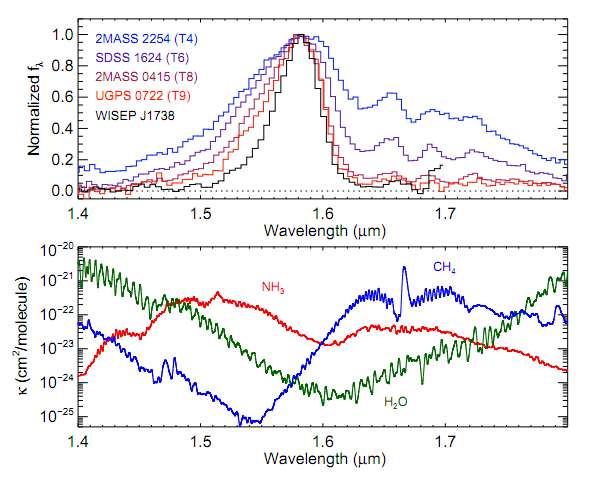 Top: A collection of near-IR brown dwarf spectra. Below: Theoretical opacity curves for the dominant absorbers. Opacity due to ammonia becomes increasingly important in cooler objects.

This paper discusses the coolest of the over 100 confirmed brown dwarfs discovered in the WISE data so far. Using followup near-infrared imaging and spectroscopy to characterize the atmospheres of these objects, the authors come to the conclusion that the coolest of these objects are the first observed members of the Y spectral class, which until now was only a theoretical prediction.

The coolest hydrogen fusing stars, known as M-dwarfs, host a number of molecules in their atmospheres, in particular TiO, VO, and CO. The hottest brown dwarfs, the L dwarfs, which have temperatures of a few thousand Kelvin, look a lot like M dwarfs with many TiO, VO, and CO lines in their atmospheres, but also lines of alkali metals like sodium and potassium and metal hydrides like FeH and MgH. Going towards even cooler objects, the T dwarfs, which have temperatures around a thousand Kelvin, absorption bands of more complex molecules like methane and water begin to dominate the near infrared spectra, while their optical emission is almost entirely suppressed due exceptionally broad absorption features due to sodium and potassium.

Theoretical models predict that once the temperature of a brown dwarf gets even lower (below 500 K), then more and more nitrogen will end up in ammonia rather than molecular nitrogen, adding ammonia absorption bands to the opacity in the near infrared – a detectable feature. 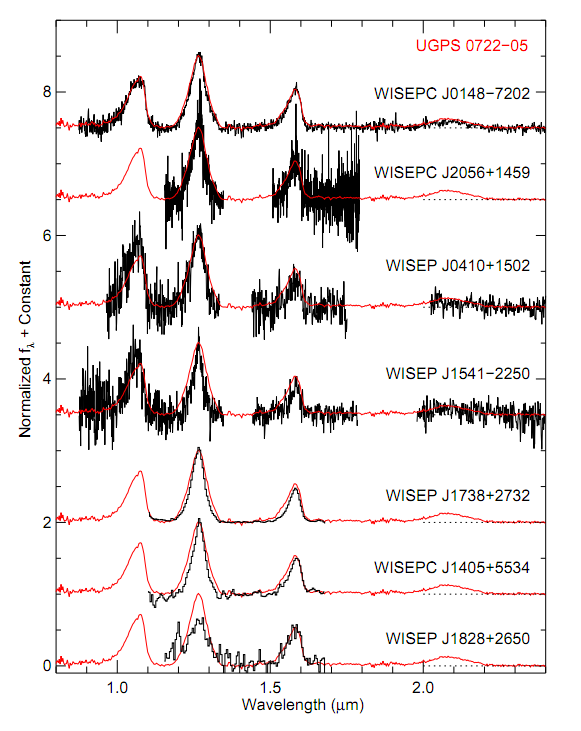 The near infrared spectra of the seven coolest brown dwarfs discovered by WISE, along with the superposed spectrum of a previously observed late T dwarf. The decreasing strength of the emission peak at 1.3 microns relative to the peak at 1.6 microns as well as the increased opacity on the blue side of the peak at 1.6 microns indicates that objects lower in this diagram have lower atmospheric temperatures. The coolest object is as cool as the human body, with a temperature near 300 Kelvin

Above, using a combination of ground-based near IR observations with the NIRC2 spectrograph on Keck and space-based observations with the WFC3 camera on Hubble, the authors beautifully show the increased importance of ammonia absorption in the infrared spectra of these objects. An ammonia band around 1.5 microns contributes more and more opacity as one looks at cooler and cooler objects. For the Y0 dwarf WISEP J1738+2732, ammonia dominates the opacity around 1.5 microns, completely eliminating emission present in the warmer brown dwarfs at these wavelengths, allowing the authors to conclude that this a Y0 dwarf.

The authors also present spectra for five other Y dwarfs, reproduced at left. Lastly, the authors point out that most of the light emitted by these objects actually comes out in the mid infrared, at wavelengths where WISE was able to easily pick them out. Looking towards the future, a new classification scheme for these objects should be possible once a sucessor to Spitzer, capable of observing in the mid-infrared, is put into service.