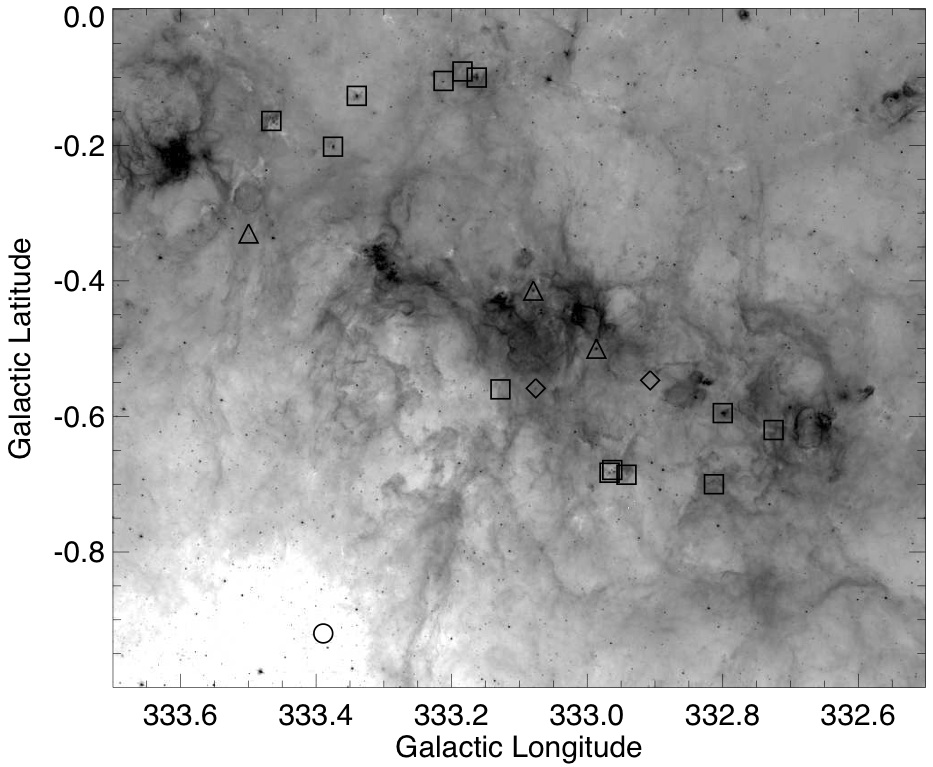 The GMC G333, shown in IRAC band 4 (8 &m m), with the sources in this survey marked with squares. Diamonds and triangles mark additional `outflow

Molecular clouds are the sites of most of the excitement pertaining to massive star formation.  In giant molecular clouds (GMCs), gas and dust, the remnants of previous stars, condense to form the next generation of stars (the process is explained very well in this previous astrobite, and references therein).

Many aspects of the star forming process, especially the process to form massive stars (greater than 8 solar masses), remain unknown.  For example, in modeling the evolution of a molecular cloud clump becoming a main sequence star, the range of scales is very large. It is difficult to create a numerical simulation which tracks everything from the scale of a nanometer (particle) to parsec (entire cloud). Thus, numerical models must assume that a star forms at some limiting point, typically when enough mass consolidates into the smallest grid cube. (For those interested in numerical simulations, check out this post).

Particularly pertaining to massive stars, it used to be thought that the radiation pressure from massive stars should be so strong as to prevent stars more massive than 8 M☉ from forming, when in reality stars are known to be much more massive (about an order of magnitude, in fact).  An accretion disk seems to remedy this problem, so that mass is accreted onto the star through a disk and radiation can still escape through the axes (see Krumholz et al. 2009).  The review by McKee & Ostriker (2007) explains the concept, but the mechanism is still very complex and not fully understood.

An important component of the star formation process is turbulence, which can both prevent large-scale collapse of the cloud and also enhance the density on small scales forming stars.  Within a cloud, turbulence is contributed by large scale rotation through a Galactic spiral arm, or on smaller scales by outflows of newly formed stars and by supernovae over time.

These were a few of the ideas used by Simpson et al. to stimulate interest in the study of one GMC in particular, named the G333 cloud for its galactic coordinates l=333.2, b=-0.4.  The goal of the paper is to use a Spitzer Space Telescope survey to characterize young stellar objects (YSOs) in this cloud according to masses, outflow parameters, and ages.  YSOs are approximately point sources (with an envelope and a disk) that excite the molecular gas in outflows and produce mid-IR and far-IR emission.

The paper discusses twelve massive star forming regions observed with Spitzer (Werner et al. 2004), which are notable due to the presence of very red, extended sources seen in two Spitzer legacy programs: GLIMPSE and MIPSGAL, using the Spitzer Infrared Camera (IRAC) and the Multiband Imaging Photometer for Spitzer (MIPS).  These surveys showed that most of the star formation in G333 is fairly isolated in the outer regions of the cloud, rather than the dense center of the GMC.

The survey was done using the Infrared Spectrograph (IRS), observing wavelengths 5.2-38 μ m using three different modules on board Spitzer.  Several methods were used to extract spectra from each module pertaining to the same positions on the sky, and then the spectra were stitched together to make a complete 5.2-35 μ m spectrum for each pointing.

All of these features were fit using an IDL program called PAHFIT to estimate the MIR extinction affecting the spectra.  Source luminosities were estimated from the total spectral energy distribution (SED, or basically flux over many wavelengths) and distance. The SEDs were fit using an SED fitter, and an example is shown. 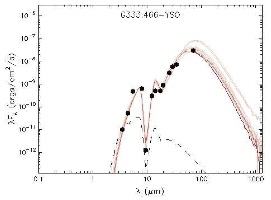 Many spectra, features, parameters and calculations ensue.  The paper is an effective example of matching theoretical models with observations to explain the many features that are observed.  For the lessons learned, jump to the paper’s section 4, “Discussion”.  The spectra of the two groups of sources (`outflow’ or `red’) have distinct features, just as they appear different in the IRAC images.
(a) Outflow sources show more absorption from silicates and ices, while red sources are dominated by PAHs and the only extinction is by the diffuse ISM.
(b) Red sources ionize their own HII regions, while outflows may only produce ionizing photons in shocks.
(c) The outflow sources produce [SI] emission, indicative of low velocity shocks, and methanol masers, commonly found in early stages of massive star formation and common among EGOs.

These distinctions indicate that the outflow sources are in a stage younger than the red stage.  The outflow sources have large, thick envelopes with cold dust and ice, while the red sources have central stars which have already contracted to become very hot protostars and produce ionizing photons.  Another conclusion is that identifying YSOs in between these two stages is not easy, and the contraction time-scale from the earlier stage to the later is likely very short.  Both outflow and red sources are seen in the same cluster, and the authors infer that star formation is an ongoing process induced by turbulent compression in the outer regions of GMCs.