NGC 1365 is a lovely spiral galaxy with an active galactic nucleus (AGN), a supermassive black hole at the center of the galaxy that emits at a very high luminosity as it accretes matter. Most of what we know about AGN comes from spectral observations. For example, X-ray spectra taken of NGC 1365 show iron (Fe) emission lines, but they are broad and distorted. There are two theories about the origin of this broadening. The first (relativistic reflection) assumes that the X-rays from the black hole are reflecting off the inner accretion disk, which is moving at relativistic speeds due to the rapid rotation of the black hole. These relativistic effects are broadening the emission lines from the Fe in the accretion disk. The second theory (absorption) claims the X-rays are passing through clouds of gas in NGC 1365 between us (the observers) and the black hole, and absorption by the gas is causing line broadening.

So far, it has been impossible to tell the difference between these two scenarios based on the observed spectra. Recently, other researchers have claimed that the black hole at the center of NGC 1365 is spinning extremely fast, but those results were based on the assumption that relativistic reflection was responsible for the observed line broadening. Risaliti, et al., investigated this claim by using new spectral observations of NGC 1365 to determine whether relativistic reflection contributed to the Fe line broadening.

The authors used the X-ray Multi-Mirror Mission (XMM-Newton)  and the Nuclear Spectroscopic Telescope Array (NuSTAR) to measure the spectrum of NGC 1365 from 3-80 keV. These data are shown in Fig. 1. 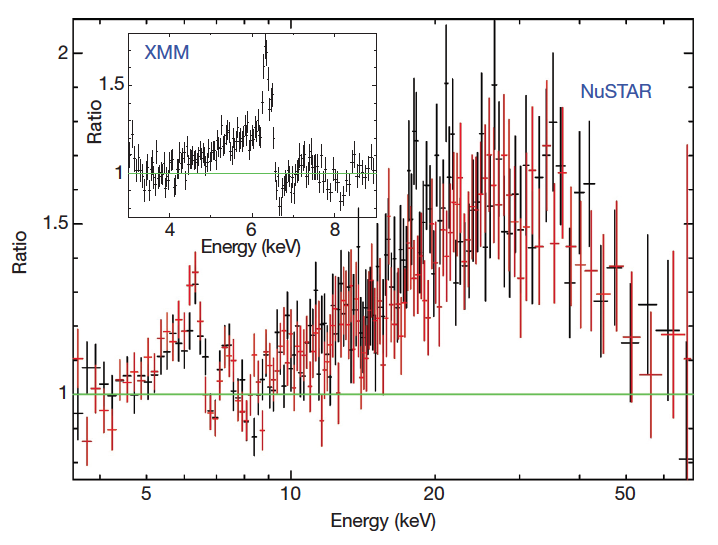 Fig. 1: XMM and NuSTAR spectra of NGC 1365. The XMM data is shown in the inset and two sets of NuSTAR data are shown in black and red in the main panel. The green line shows the usually featureless continuum. Note the excess emission from 5-7 keV and 10-80 keV. These are typical signatures of relativistically broadened emission lines.

The authors used two models to try to reproduce the data. The first, Model 1, includes reflection from a rapidly rotating inner accretion disk plus an absorbing cloud that varied as it passed in front of the black hole and only partially covered the X-ray source. The second, Model 2, only considered variable, partially covering absorbers, with no relativistic reflection. Using only the XMM-Newton data, the authors could not distinguish between the two models. But Model 2 (with one absorbing cloud) could not reproduce the NuSTAR data, while Model 1 could within about 5%. The authors modified Model 2 to include three absorbing clouds with different densities and were able to fit the NuSTAR data. Now they had two models that fit the data: Model 1, including both relativistic reflection and absorption, and a three-cloud Model 2, including only absorption. To compare the models, the authors ran an F-test, which showed that the probability of this three-cloud Model 2 being more acceptable than Model 1 was only 8×10-5 . Also, the three-cloud model would be inconsistent with optical and infrared observations of NGC 1365. Because of this, the authors determined Model 1 was more consistent with the observations. 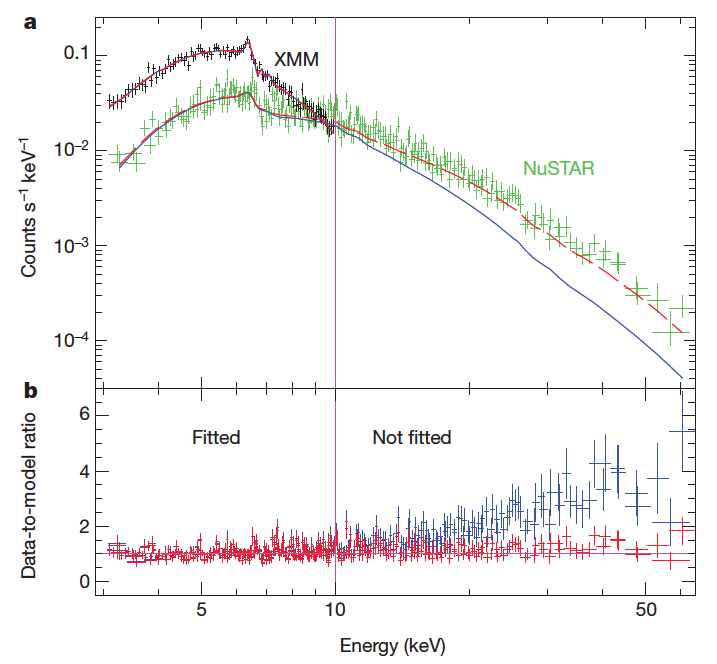 Fig. 2: (a) shows the spectra from XMM (black) and NuSTAR (green) with the two models described in the paper. Model 1 (red dashed line) includes relativistic reflection and fits both data sets well, while Model 2 (blue line) cannot reproduce the NuSTAR data. (b) shows the data-to-model ratio for Model 1 (red) and Model 2 (blue).

where J is the angular momentum of the black hole, c is the speed of light, G is the gravitational constant, and M is the mass of the black hole. The authors determined that for NGC 1365, a* ≥ 0.84. This agreed with previous observations of NGC 1365 (which depended on the assumption that relativistic reflection was occurring). The authors of this paper confirmed previous results and validated the previous authors’ assumptions.