In 2010 the Fermi satellite’s Large Aperture Telescope (LAT) reported a surprising discovery: detection of a gamma ray transient that appeared to come from a nova, V407 Cyg. Novae are runaway hydrogen fusion episodes that typically take place in binary systems with a large star and a white dwarf companion. The larger star overflows its Roche lobe, the limit of its gravitational potential, letting the white dwarf pull hydrogen off its surface like a kid with cotton candy.  The hydrogen accretes on the surface of the white dwarf until fusion ignites and blows the material away (leaving both stars intact). Although they produce bright optical transients, novae had not previously been considered as potential sources of gamma rays since they don’t tend to accelerate particles to the required energies.

V407 Cyg, however, is a special type of nova called a recurrent symbiotic nova, in which the companion star is a red giant blowing out a strong stellar wind. Theorists pointed to the shock created by the collision of the fast-moving nova ejecta with this thick stellar wind, something that doesn’t appear in classical novae, as a place where high-energy particles could be accelerated to produce gamma rays. Since most novae are the classical kind, this explained both why gamma rays were seen from V407 Cyg and why they weren’t seen from other novae. 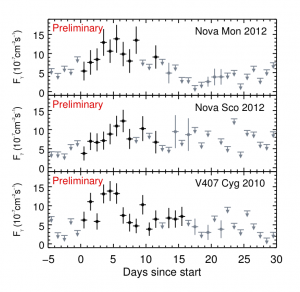 Although the LAT followed up on later optically bright classical novae, it saw nothing for two years, and the theory that V407 Cyg was a special case seemed confirmed. Then, in June 2012, two separate novae were seen in gamma rays. Nova Sco 2012 and Nova Mon 2012 both emitted detectable levels of gamma rays at times corresponding to their optical peaks; Nova Mon 2012 was even found in the gamma ray band before its optical counterpart was discovered, since it was too close to the Sun at the time. But both Nova Sco 2012 and Nova Mon 2012 are classical novae accreting from main sequence companions. There’s no thick stellar wind to produce a shock like there is in V407 Cyg. So where are the gamma rays coming from? And why are we seeing them from these novae and not others?

The answer at the moment is: we don’t know. Swift X-ray observations showed no corresponding X-ray source in Nova Sco 2012, but did find one in Nova Mon 2012. The VLA also observed both objects in the radio and found a faint detection in Nova Sco 2012; Nova Mon 2012 was better-observed, and it suggested a bi-polar structure with optically thick Brehmsstrahlung emission, which comes from accelerated electrons. Nova Mon 2012 may be associated with a class of very bright classical novae called ONe novae, so-named because they happen on oxygen-neon-magnesium white dwarfs. Oxygen-neon-magnesium white dwarfs are the rarest and most massive white dwarfs and their nova eruptions are correspondingly more energetic. Nova Sco 2012 seems to be a fairly standard classical nova.

But although V407 Cyg, Nova Sco 2012, and Nova Mon 2012 were different classes of events in the optical, their gamma ray spectra are quite similar. All three have soft spectra that take several days to rise to their peaks and last 2-3 weeks. Since we don’t have much idea what the underlying production mechanism is, this could just be a coincidence. With three events discovered, however, it’s now clear that V407 Cyg wasn’t a fluke. Novae can be gamma ray emitters. The next step will be finding out why.