Where do we come from? This is the sort of big question that keeps people up at night, and NASA funded. If you are a star, however, the answer is easy: you come from a big cloud of gas. As astronomers, if we want to understand what controls properties of stars — what makes them big, small, clustered, or isolated– we can start by looking at the gas that will make them.

This paper presents a detailed study of the gas in M51, the Whirlpool galaxy. This system is actually two galaxies, but this paper focuses on the larger, main spiral (NGC 5194) in this interacting pair. This galaxy is relatively close by (20 million light years away),  massive (~150 billion solar masses), and quite well-studied: astronomers have looked at it in wavelengths from radio to near-infrared, optical and ultraviolet.  The combined resolution and sensitivity of these new millimeter observations (the J=1-0 rotational transition of the carbon monoxide molecule) allow the authors to detect for the first time individual molecular clouds in this galaxy, the objects from which stars and star clusters are born. Below is an image of M51 from this study showing the gas surface density (the amount of gas along our line of sight) from small amounts (dark blue) to large amounts (bright pink), all representing the fuel required to make the next generation of stars in this galaxy. 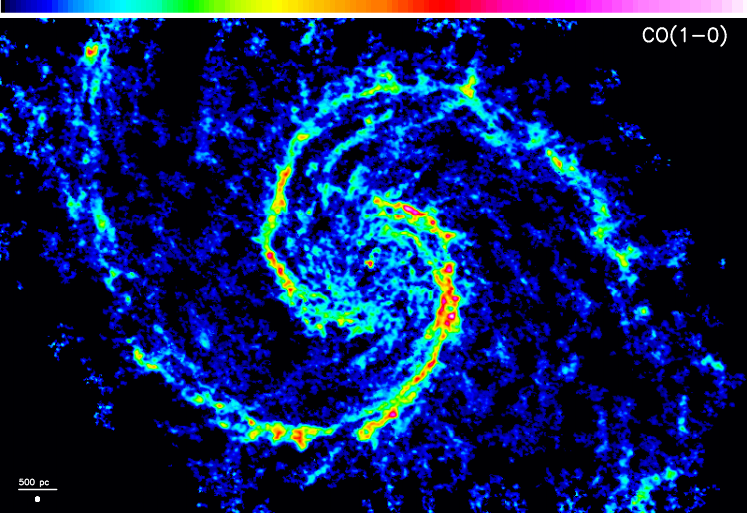 M51, the Whirlpool galaxy, as seen in integrated emission from the J = 1-0 transition of the carbon monoxide (CO) molecule. The resolution of this image is ~ 1 arcsecond, or 40 parsecs at the 20 million lightyear distance of M51. (Adapted from Figure 1 of Schinnerer et al. 2013)

So what does it take to make an image like this? ALMA? Not quite. M51, with a declination of +47 degrees, is a galaxy that ALMA (the Atacama Large Millimeter Array, located in Chile at a latitude of 23 degrees South) will find very difficult to observe. Instead, the authors used the Plateau de Bure Interferometer (PdBI) and the IRAM 30m radio telescope to detect gas clouds as small as 40 parsecs across. The image above is a mosaic combining 60 pointings of PdBI with IRAM observations over the same region. But isn’t one telescope enough for the job of observing M51? Why take the time to observe it twice?

The answer is that interferometers (arrays of two or more telescopes which work together to act like a telescope with a diameter equal to the separation between antennas) by themselves have a big problem for big objects like M51. Although interferometers give us the advantage of higher resolution, that is not whole story– not only does the antenna separation determine the resolution, it also sets the size scales that you are sensitive to, acting like a high-pass filter for spatial frequencies. As shown in the figure below, a pair of antennas in an interferometer resolve ‘fringes‘ on the sky representing the resolution of that antenna pair (a function of the frequency of the observations and the spacing of the antennas). Different spacings and orientations from the combinations of many antenna-pair fringes contribute to making your beam– the tiny white dot in the bottom left corner of the above image, and the interferometric equivalent of the point-spread function (PSF). The problem is that flux from structures larger than the largest fringe that goes into making this beam will be lost. Since the shortest antenna spacing yields the largest fringe, and the antenna spacing cannot be smaller than the size of the telescope (get too close and the antennas will start bumping into and blocking each other), there is a maximum size scale that you can detect flux from.

How can we get that flux back? Use a single dish telescope! These telescopes are sensitive to the flux on all size scales larger than the resolution of their dish. By combining the data from an interferometer with single dish data, you can recover all of the flux from an object, and still observe it at high resolution. This synergy is why the most effective radio and millimeter interferometers all have a single-dish buddy: the Very Large Array (VLA) has the Green Bank Telescope (GBT), the PdBI (which took these images) has IRAM, and ALMA will have both a compact array and several ‘total power’ single dishes.

In an interferometer, each pair of antennas makes a set of interference fringes on the sky which are proportional to the resolution of the telescope (and inversely proportional to the antenna separation). Together, the fringes from all pairs of antennas in the array make up the elliptical beam of the telescope. As the antenna separation increases, smaller structures can be resolved, but the sensitivity to large structures decreases. As a rule of thumb, you will not be able to detect flux from structures larger than the largest interference fringe, shown above. To recover this flux, it is necessary to combine interferometric data with data from a single dish, which will have lower resolution, but will be sensitive to the flux from structures of all sizes.

So now that you have a high-resolution picture of almost all of the gas clouds in M51, what do you do with it? This paper focuses on comparing (correlating) the location and amount of this gas with other tracers of galaxy properties. This includes tracers of different phases of the interstellar medium (the ISM, or gas in a galaxy at all temperatures, from plasma to neutral to molecular), tracers of star formation, and tracers of the existing stellar populations. The authors highlight three particularly interesting correlations, each of which we discuss below and illustrate in the following figure.

The tracer which is best correlated with the CO (1-0) emission in M51 is the I-H color of the galaxy. As you can see in the figure below (left), the spatial correlation is so good that the overlying contours of CO emission are barely noticeable. The I-H color traces the extinction of starlight in the galaxy due to cold dust, and the authors find that the color (or amount of extinction) is linearly correlated with the amount of gas which is present. This indicates several things– first, the cold dust and the gas traced by CO are well-mixed, and secondly, that the ratio of gas and dust is reasonably constant throughout the galaxy. However, the slope of this correlation is observed to vary with the distance from the center of M51, which the authors suggest could be due either to variations in the dust temperature or the excitation of the CO molecule.

The correlation between the CO gas and emission from polycyclic aromatic hydrocarbons (PAHs) is more complicated. Just what PAHs are is also a complicated issue– they are likely extremely large conglomerations which bridge the gap between molecules and dust, but their exact makeup and origin is fuzzy. Although the CO and nonthermal 8 micron emission are spatially well-correlated, indicating a close link between PAHs and molecular gas in M51, the strength of the PAH emission does not closely correlate with the CO intensity. The authors interpret this lack of correlation to suggest that the PAHs occur just in the irradiated surface layer of gas clouds in M51, rather than in the interiors of more fully irradiated clouds. They also suggest that the good correlation of PAH emission with the molecular gas, even in the regions between the spiral arms of the galaxy and away from strong UV sources, indicates that the PAHs are being excited by the more widely distributed old stellar population in M51.

Finally, there is a strong correlation between 20 cm radio emission and the CO emission. This is not a correlation with thermal radio emission (i.e., free-free emission from ionized gas, like that in HII regions around young stars) but rather a correlation with nonthermal or synchrotron radiation. Explanations for this correlation point to cosmic ray electrons from massive stars as the likely source of the synchrotron emission. Two plausible scenarios are presented: first, that when the original cosmic ray protons impact the dense gas, the interaction results in the production of many new cosmic ray electrons, explaining the enhancement of cosmic ray-related synchrotron emission in dense gas. A second possibility is that the magnetic field strength is enhanced in regions of higher gas density. In this case, the observed synchrotron enhancement in the dense gas is not a result of more cosmic rays, but instead an increase in their emission proportional to the magnetic field strength. 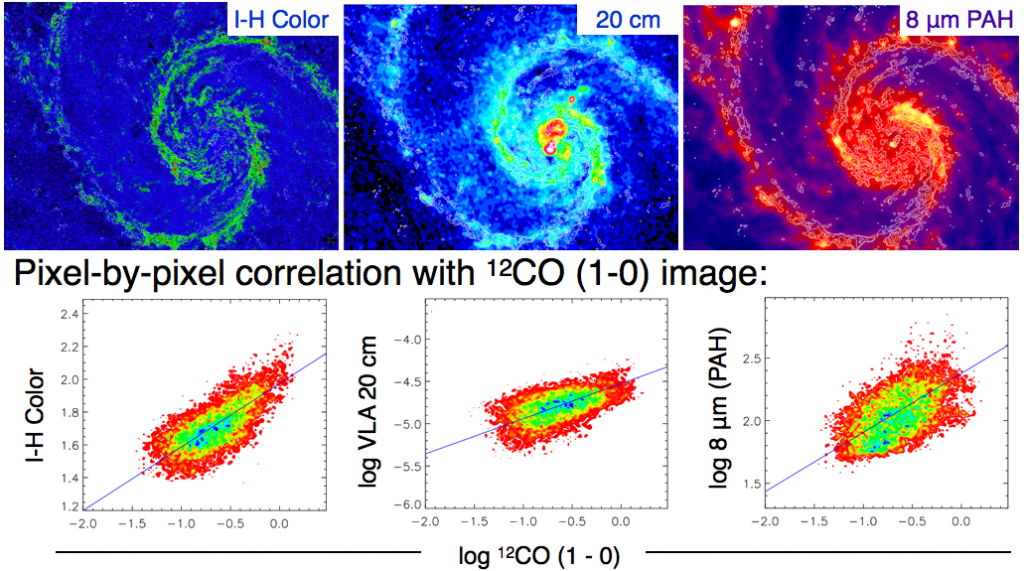 Top row: Images of M51 in I-H color, 20 cm radio emission from the VLA, and nonthermal 8 micron (PAH) emission from Spitzer. Bottom row: Pixel-by-pixel correlations of the brightness of the above images with the brightness of the 12CO (1-0) emission. The depicted correlations are only for the disk of the galaxy, and exclude the interarm and central regions where the correlations are weaker, or are affected by the presence of the active galactic nucleus (AGN). A roughly linear trend is seen in all cases, with the most scatter in the correlation of PAH emission with CO (left). (Figure adapted from Figures 2,3, and 6 of Schinnerer et al. 2013)

From these data, we know that the star-forming gas in M51 is well-mixed with the dust, heated by cosmic rays, and generally only irradiated at the surface by stellar photons. This already tells us a lot about the environment in which stars in this galaxy are forming. But an image as big and cool as this picture of M51 has a lot more stories to tell. Keep on the lookout for more exciting results soon, including studies of environmental differences in gas cloud properties, and an explanation for why some of the high-density gas in this galaxy is forming stars like gangbusters, and why some of it just can’t be bothered!